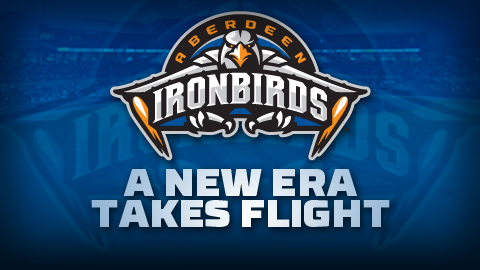 Aberdeen, Md. - The Aberdeen IronBirds, Class 'A' short season affiliate of the Baltimore Orioles, today unveiled a new team logo. The logo will make its national merchandise debut at the Baseball Winter Meetings on Monday, December 3 in Nashville, Tennessee.

"This logo represents a new era of IronBirds baseball in Aberdeen," said Cal Ripken, founder of Ripken Baseball. "We have a lot of exciting plans for 2013, while continuing to remain true to our core mission of creating memorable experiences in and around the game of baseball."

Newly branded hats and t-shirts are currently available online and at "The Hangar," the official merchandise store of the Aberdeen IronBirds. Shop Now

"The IronBirds are evolving to continue to remain on baseball's leading edge," said Bill Ripken, co-founder and executive vice president of Ripken Baseball. "This is why we wanted a fresh new look and feel to connect with families, and resonate with fans of all ages."

The IronBirds have also officially announced their schedule for the 2013 season; Opening Day is Monday, June 17 at 7:35 p.m. View the Schedule: Online or Print

"We look forward to providing our fans and the community with another ten seasons of the most affordable family entertainment in the region," said Aaron Moszer, General Manager of the Aberdeen IronBirds. "We've had 2.5 million fans through the turnstiles so far, and we're looking forward to the next 2.5 million."