Curve's Bob Lozinak to be crowned King of Baseball

Team owner, founder of professional baseball in Altoona will be honored at 2019 Winter Meetings 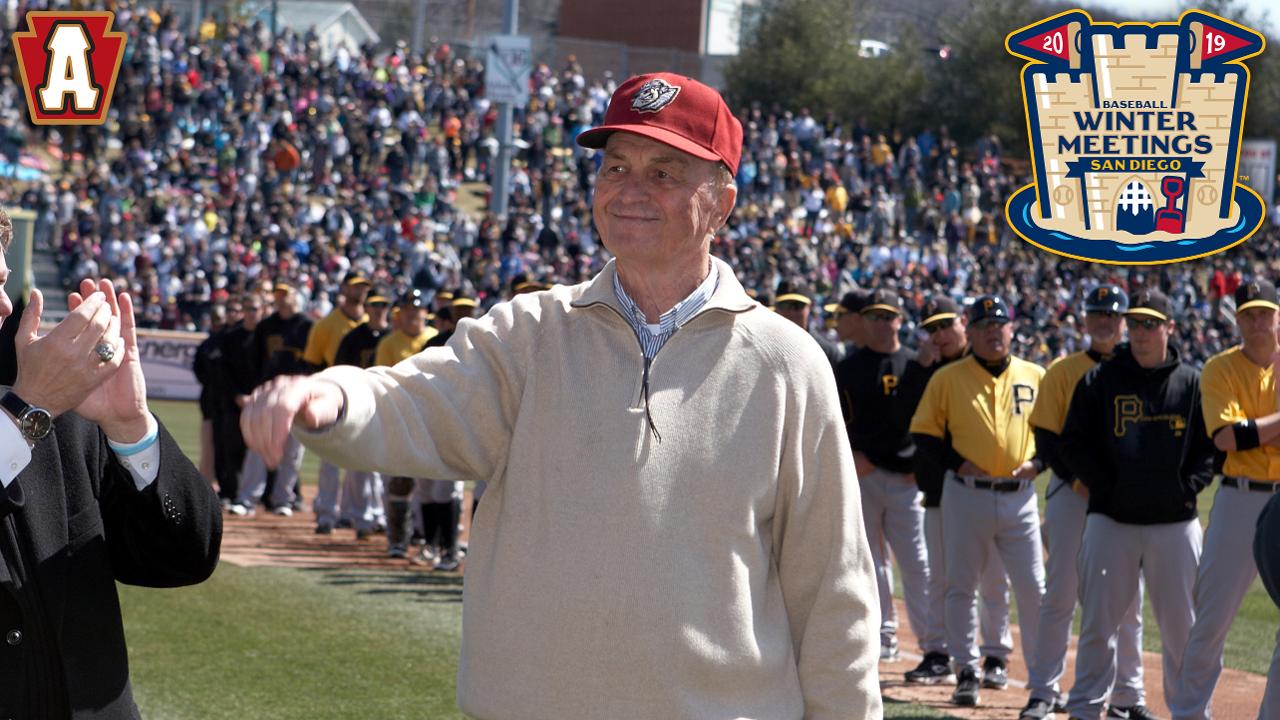 The King of Baseball is a long-standing tradition in which Minor League Baseball recognizes a veteran of professional baseball for longtime dedication and service. Capping off his 40th year in the sport, Lozinak will receive the King of Baseball Award during the Winter Meetings Banquet on Sunday, Dec. 8 at the Hilton San Diego Bayfront in San Diego, Calif.

"It is an award that isn't given out to too many people," said Lozinak. "The odds of getting it are really slim. My first reaction was, 'Wow! This is unbelievable that they'd pick me.'"

Lozinak envisioned a professional franchise in his hometown of Altoona as early as the mid-1970s. This dream became reality when the Curve played its first season in 1999. Bob was one of the original owners of the franchise alongside his wife, Joan, from 1999-2001. The Lozinaks along with their three sons, Mike, David and Steve reacquired the ballclub on December 30, 2008.

"Being born and raised in Altoona, I knew there was a baseball atmosphere and it was a great city for a baseball team but there wasn't a stadium. Thinking back to the first try to bring a team there, it just wasn't ready back then. Sometimes unanswered prayers are a good thing," said Lozinak.

The majority of the Curve's 21-year relationship with the Pittsburgh Pirates has been under Lozinak ownership. It is the longest uninterrupted affiliation between the Pirates and a minor league franchise. Altoona also brought two Eastern League championships to West-Central Pennsylvania in 2010 and 2017.

Bob began his now 40-year baseball venture when he purchased the Triple-A Albuquerque Dukes in the fall of 1979. The organization went on to win numerous awards for club operations in addition to six Pacific Coast League titles. He is also on a short list of minor league owners to win the John H. Johnson Award twice (1984 and 1991), which is given to the top franchise in Minor League Baseball. Albuquerque also captured the Larry McPhail Trophy in 1987 for the country's top promotional effort.

Lozinak sold the Dukes in 2000 so he could focus his efforts on his new franchise, the Altoona Curve. The Lozinak family also owned and operated the West Tenn Diamond Jaxx from 2002-2008.

Bob holds a bachelor's degree in history from St. Francis College in Loretto, Pa., which was put on hold for five years of service in the Army during the 1960s. He completed Officer Candidate's School in Lawton, Okla. and was honorably discharged as a 1st Lieutenant. After his military service and college, his wife and he became McDonald's franchisees in 1969.

Bob and Joan Lozinak were inducted to the Blair County Sports Hall of Fame on April 23, 2016 and continue to provide enjoyable, family fun in their hometown through the game of baseball.

"This is an honor that Dad shares with everyone that has ever been associated with our teams from 1979 until now," said David Lozinak, the Curve's Chief Operating Officer and one of Bob's three sons. "Without the help and support of those thousands of people, none of his success would have been possible. When you look at the long list of previous recipients of this award, it's humbling to think of Dad in those circles because those people are legends of this game. The opportunities that he's presented to us in our life are immeasurable, but the best thing is to be able to call him Dad."

The Altoona Curve, 2010 and 2017 Eastern League Champions, have been the Double-A affiliate of the Pittsburgh Pirates since 1999. For more information, visit AltoonaCurve.com, call 877.99.CURVE or stop by the PNG Field box office. Additionally, the Stockyard Team Store is open Monday through Friday from 9 a.m. to 4 p.m. and online 24/7/365.