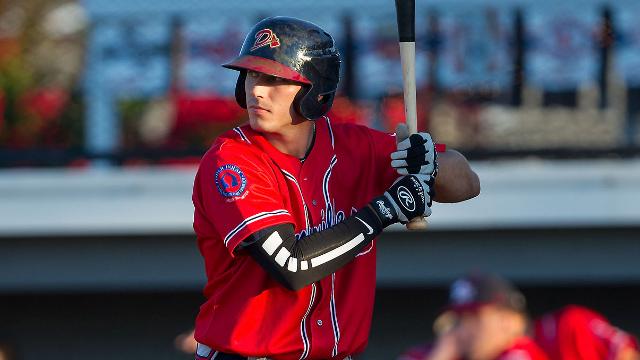 With one swing of the bat, Tanner Krietemeier gave the ball and the Braves the lift they needed Thursday.

Entering the fifth inning with the score, 1-1, Krietemeier capped the Braves' four-run frame with a two-run long ball over the right-field wall of Howard Johnson Field. The 22-year-old credited the homer to a talk he had with one of his teammates.

"My previous at-bats, I wasn't being very aggressive," Krietemeier said. "I actually had one of the catchers come up to me and we had a little talk. He asked me what my approach was. I said I was being passive, and he said if I get a good pitch, just put a good swing on it. The pitcher [Jonathan Escudero] came in and started me off with a good pitch. I just tried to be aggressive and I put a good swing on it."

After dropping the first game of the best-of-3 Finals, Krietemeier and the Braves knew what they had to do Thursday.

"It was competitive," the Oklahoma native said of the atmosphere in the dugout. "We knew we had to win to keep going, so everybody knew we had to come out ready to compete. Our offense put together a couple of good innings and the pitching kept us in the game for our offense to get the lead and the win."

Andrew Waszak made the contributions hold up, allowing one run on seven hits while fanning seven over 6 2/3 innings to earn the win.

"That was amazing," Krietemeier said. "We really needed that. We needed him to come out and pitch like he did. No surprise, he's been doing that all year."

Selected in the 23rd round out of Oklahoma State University in June, Krietemeier split the year between Class A Rome and Danville, batting .261 with 19 RBIs in 27 games. Getting the chance to play for a championship just months after being drafted feels like an honor to him.

"It's a great privilege," said Krietemeier, who is batting .364 in four playoff games. "To come into a program and get the opportunity to play for something as big as this, it's an unbelievable opportunity. I'm happy to be here and happy to be a part of it."

Oscar Mercado, the Cardinals' No. 16 prospect, went 2-for-4 with a triple and a run scored for Johnson City, which will host Game 3 on Friday.