For One Night, Tourists Will Adopt Hippies Name 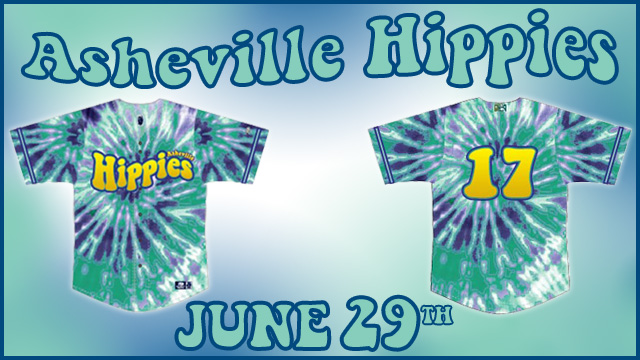 ASHEVILLE-- On Thursday, June 29, 2017 McCormick Field will become the home of the Asheville Hippies. For one night only, the team will wear custom jerseys with a Tourists colored tie-dye theme and the word "Hippies" across the chest as they take on the Greenville baseball team. The jerseys worn on June 29 will be auctioned off to fans with proceeds benefiting a local charity.

The series ended in a 12-12 split. Having not lost a season series to Greenville since 2010 the Tourists considered this a loss and chose to execute their end of the bargain. Greenville respectfully declined.

"If poking a little fun at ourselves will help raise money for those in need, then I'm all for it," said Asheville Tourists President Brian DeWine.

The Tourists play Greenville 22 times in 2017 including Opening Night on April 13.

Asheville Hippies T-Shirts are currently available for fans to purchase at The Tourists Trap located at McCormick Field and online at TheTouristsTrap.com.

Please direct any questions or interview requests to Doug Maurer at (828) 258-0428 ext. 203 or dmaurer@theashevilletourists.com.