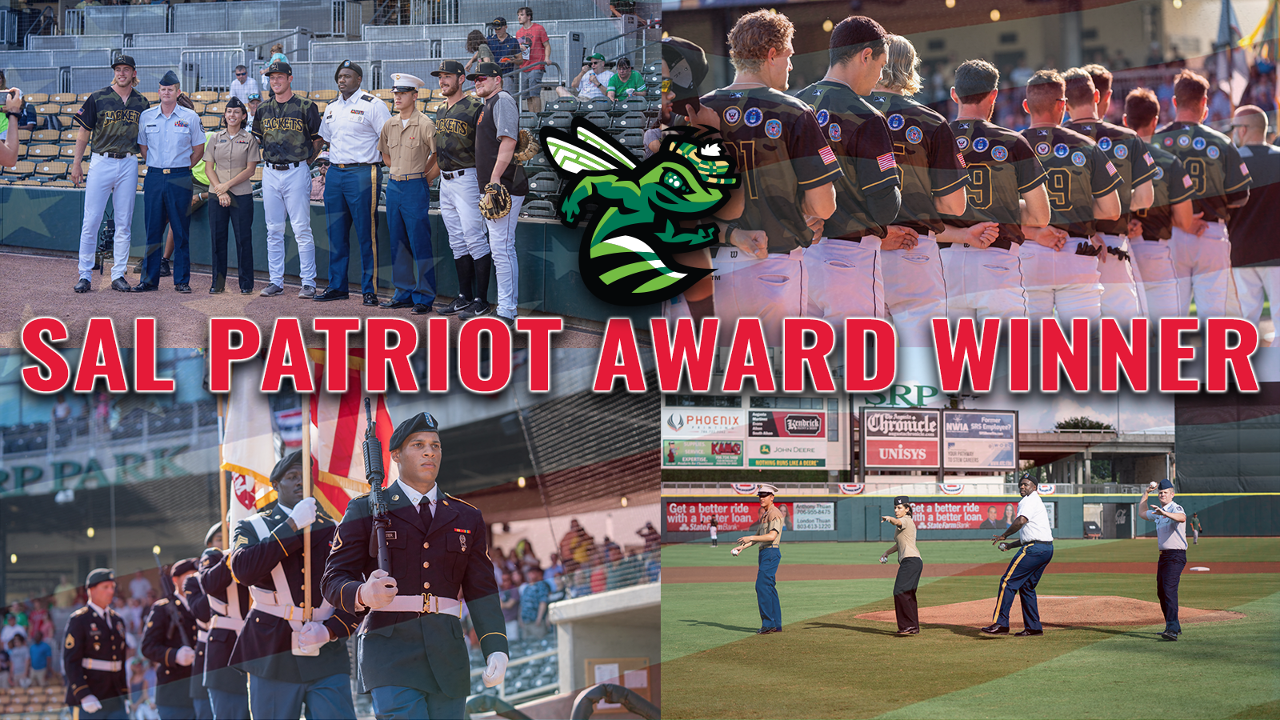 NORTH AUGUSTA, SC: The Augusta GreenJackets, South Atlantic League affiliate of the San Francisco Giants, are excited to receive the Charles K. Murphy Patriot Award for the South Atlantic League two years in a row. With a vibrant and growing military community in the CSRA, the GreenJackets have consistently expressed their gratitude to the servicemen, women and veterans who call the CSRA home. Because of these efforts, the GreenJackets have been awarded the Charles K. Murphy Patriot Award, given to an individual or club for its outstanding support of the military branches and engagement with veterans, as announced by the Minor League Baseball office.

As the South Atlantic League's nominee for the Patriot Award, the GreenJackets continued to go above and beyond in paying their respects to the CSRA's strong military ties during the 2019 Season at SRP Park. The club hosted eight Military Mondays in partnership with local businesses, when servicemen, women and veterans received 120 free tickets, recognized one service member or veteran nightly with the E-Z-GO Salute to Soldier of the game, hosted the 13th Annual Military Appreciation night, and many more military initiatives throughout the season.

"It is our goal at the GreenJackets to be integrated within the fabric of our community, and one of our focuses has been the strong military presence here in the CSRA both active and retired and we look forward to continuing to grow those efforts ," stated GreenJackets Vice President Tom Denlinger "We are truly honored to receive this award but truthfully this extends well beyond the GreenJackets with the partnerships we have in the community to continue to honor those who serve or have served."

The GreenJackets hosted their 13th Annual Military Appreciation Night on Saturday, July 20th against the Greensboro Grasshoppers (Pittsburgh Pirates). The club helped to bring in 10 buses of troops from Fort Gordon, in which they were escorted by a police transit to make sure that they arrived here on time and all together. 5,000 tickets (Reserved & General Admission, valued at $30,000) were donated on behalf of the GreenJackets and the 2019 Military Appreciation partners, not only to Fort Gordon, but also to the two VA Hospitals in the CSRA, VFW's throughout the CSRA and other local military establishments. To kick off the night, the GreenJackets had four commanding officers representing each branch of the U.S. Military throw out a Ceremonial First Pitch. The club then had the Fort Gordon Joint Installation Color Guard present the colors and a U.S. Navy and Air Force Joint Choir sing the National Anthem before the game and God Bless America during the middle of the seventh inning. The 13th Annual Military Appreciation Night welcomed 5,596 fans to SRP Park.

The GreenJackets, during the 2019 season, continued with the successful "Military Mondays" initiative that was started during the 2018 season. The Military Monday program provided 120 free tickets to men and women at Fort Gordon and other military establishments throughout the CSRA. In total, the GreenJackets hosted eight Monday games, meaning 960 tickets (valued at $7,680) were distributed to soldiers, veterans and their families to come out and enjoy a night at SRP Park. The club also offered a $2 discount on tickets in any section to military men and women and their families on Mondays. For each Monday game, the GreenJackets wore a specialty Military Monday jersey. This jersey had representation of each branch of our U.S. Military on the back of it. During the last Monday game, Monday, September 2nd, the GreenJackets auctioned these off in an off-the-back player jersey auction. The GreenJackets have donated funds from the Military Jerseys dating back to 2014 to Forces United (close to $14,000 in total since the partnership began).

The GreenJackets, in partnership with T-Mobile and the Wounded Warrior Project, were able to donate 1,500 tickets (Reserved & General Admission, valued at $9,000) to different Veteran affiliated groups, the two local VA Hospitals and to veterans and their families who walked up to the Box Office on Monday, June 24th. On this night, the

GreenJackets welcomed 600+ Veterans and their families to the game. The GreenJackets have hosted 25 Military Promotions, Hail & Farewells, Retirements and Reenlistments during the 2019 season. Each Military affiliated ceremony is special, but one highlight the GreenJackets were honored to host was the promotion of Colonel Spurgeon to Lt. Colonel. The GreenJackets were able to host the formal promotion which was presided over by the Commanding General of Fort Gordon, Major General Neil S. Hersey.

The GreenJackets and partner, E-Z-GO, have been recognizing men and women in our military (active duty and veterans) for many years with the E-Z-GO Salute to Soldier of the game program. The selected man or woman is given 4 Reserved Tickets for themselves and their family ($40 value), $40 in Auggie Bucks (stadium dollars) and is recognized during a half inning in the game with an intimate interview on the videoboard. The GreenJackets, when closing out the E-Z-GO Salute to Soldier of the Game, also ask for all of the Military Men and Women (active duty or veterans) to stand so they can receive the recognition that they most definitely deserve from our fans. On a nightly bases, there are over 300 Military men and women who attend GreenJackets games.

"I would like to congratulate our friends at SRP Park on their recognition for a second year in a row for their exceptional support to our military! From the military appreciation day, to the home game recognition of our service members, the welcoming environment at SRP Park is felt by all members of the Fort Gordon community. We are grateful for the strong partnership with the Augusta GreenJackets, and for the leadership of the ball club. On behalf of the Soldiers, Sailors, Airmen, and Marines of Fort Gordon, I want to thank every member of their club for the world class support and partnership." -Colonel James Clifford, Commander, U.S. Army Garrison.

Service members and veterans were also frequent performers of the National Anthem at SRP Park during the 2019 season. The club also hosted many military promotions, farewells, retirements and much more during the 2019 Season at SRP Park.

The Patriot Award is named in honor of the longtime Florida State League president and U.S. Army veteran who passed away Feb. 21, 2015 at the age of 83. Murphy retired as a Lieutenant Colonel after 21 years in the U.S. Army, broke into professional baseball in 1975 and led the Florida State League from 1990 until his passing. He received the Warren Giles Award for outstanding service as a league president in both 2011 and 1991, and the Friends of Baseball Chapel Award in 1994.

2020 Augusta GreenJackets season seat memberships are on sale now. To learn more about the benefits and to get in on the 2020 action, visit www.greenjacketsbaseball.com or call (803) 349-WINS (9467).