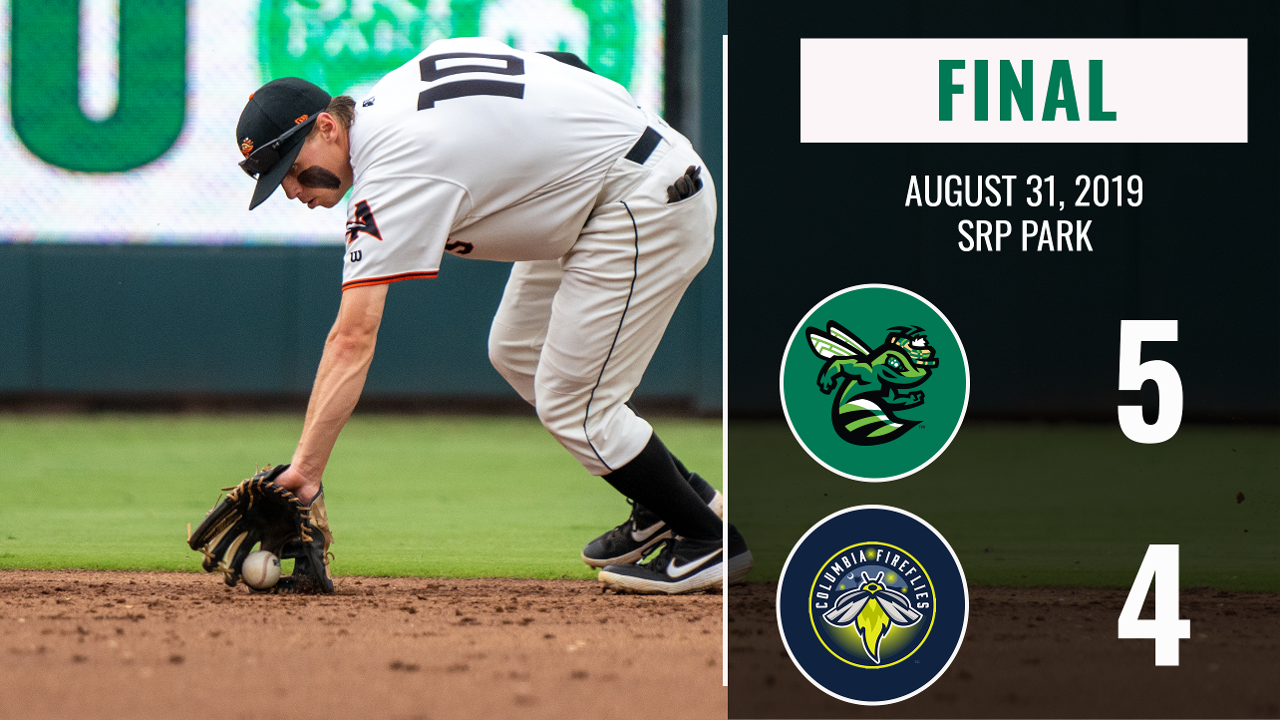 NORTH AUGUSTA, SC: The Augusta GreenJackets (75-61, 39-29) can smell the 2019 Playoffs. After their 5-4 win over the Columbia Fireflies (52-82, 28-40) on Saturday night, the GreenJackets Magic Number is down to just one. A GreenJackets win or an Asheville Tourists loss the next two days gets Augusta the 2nd half title.

The GreenJackets offense continued their 1st inning scoring on Saturday night. After scoring four runs in the 1st inning on Friday, it was an RBI single for Tyler Fitzgerald to make it 1-0. Later in the inning, Logan Wyatt doubled to drive in a run and give the Jackets a 2-0 lead.

Columbia responded right away in the 2nd inning. After an RBI-triple for Guillermo Granadillo, it was Chandler Avant with a single to tie the score at two. It was the first run Kai-Wei Teng had allowed in his last 19.1 innings. The Jackets got a run back thanks to a throwing error from Columbia's Shervyen Newton in the 2nd inning. The Jackets led at 3-2.

In the 3rd inning, it was more production from Wyatt. His RBI single made it 4-2 Jackets. Then an RBI single for Genoves gave Augusta the 5-2 lead. Kai-Wei Teng finished his night after seven-innings on the mound, and he allowed just two runs as he got the win.

The GreenJackets led 5-2 going to the 9th, but a Chandler Avant two-run home run in the 9th inning made it 5-4. The Jackets held on though, and they picked-up the 5-4 victory.

Player of the Game: Kai-Wei Teng

Teng has gone seven-innings in three consecutive starts, and on Saturday he had a career high 11 strikeouts. Teng improves to 3-0 on the year as his ERA for the Jackets is at 1.55.

Seth Corry is just four strikeouts away from passing Elvin Hernandez and becoming the all-time leader on the GreenJackets strikeouts list. Corry comes into tomorrow's game with 168 strikeouts. The southpaw was named the South Atlantic League Pitcher of the Year early last week as he leads the league in strikeouts, ERA (1.66) and WHIP (1.04). Corry's last start against the Greenville Drive (Boston Red Sox) was another stellar performance. He went five-innings of shutout baseball and he ended the night with seven strikeouts. He also did not walk anybody in that game. Corry was a 3rd round selection by the San Francisco Giants in the 2017 MLB Draft from Lone Peak High School in Highland, Utah.

Alec Kisena will make the start for the Columbia Fireflies on Sunday evening. Kisena has made 23 appearances this year for Columbia, but Sunday will be just his 4th start of the season. The right-hander is coming off one of his best outings of the year. He went 6.2 innings and he allowed just two-runs against the Hickory Crawdads (Texas Rangers) on August 27th. Kisena has played in three different leagues this year but has pitched 64.0 of his 76 innings this year with Columbia. He was a 16th round selection by the Detroit Tigers out of Edmonds Community College in 2015.