Magic Number down to three after 7-3 win over Columbia 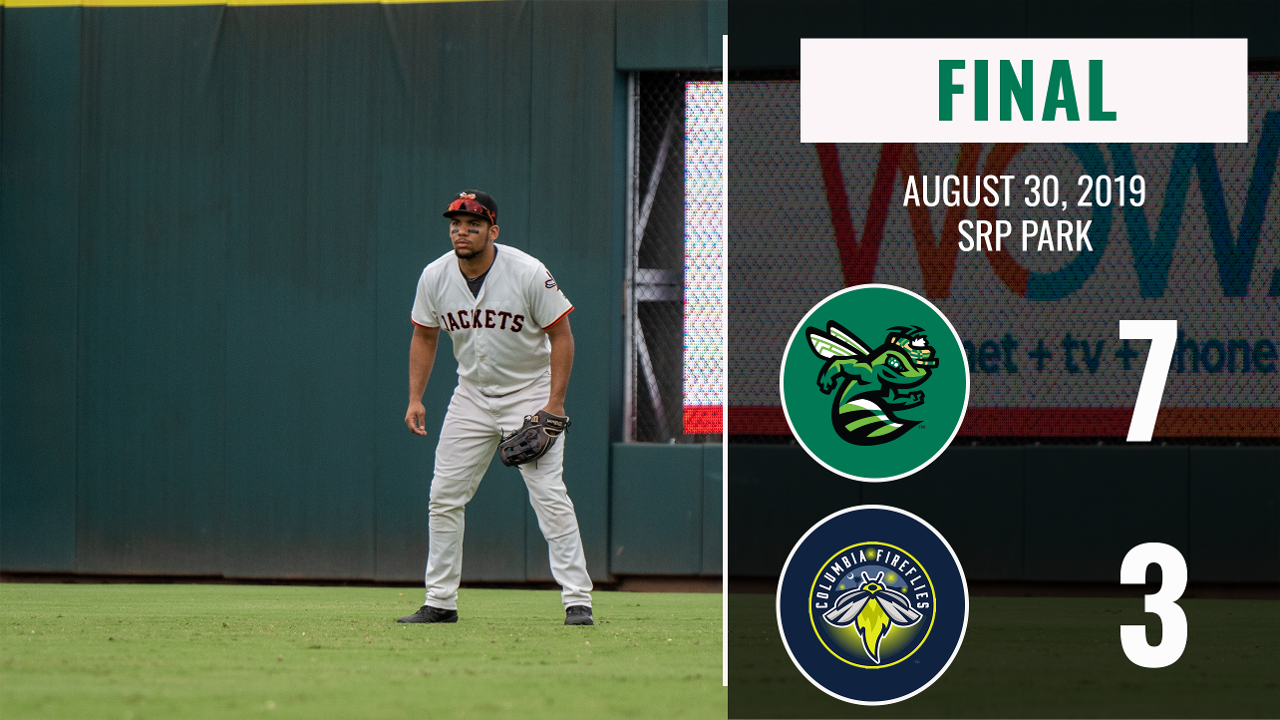 NORTH AUGUSTA, SC: On Friday night, the Augusta GreenJackets (74-61, 38-29) grabbed their third straight win. The 7-3 victory over the Columbia Fireflies (52-81, 28-39) helps the Jackets lower their magic number to three. The Asheville Tourists won tonight in Rome to stay one-game back of 1st place.

After the GreenJackets scored 11 runs the previous night, they came out on Tuesday and put up four-runs in the first inning. It was Sean Roby with an RBI single to break open the scoring. Then Franklin Labour singled to make it 2-0 Jackets. Later in the inning, a double for Andres Angulo extended the Augusta lead to 3-0, and a wild pitch scored another run to make it 4-0 Jackets.

The offense stayed hot in the 2nd inning. Frankie Tostado knocked in his 83rd run of the year with a fielder's choice to make it 5-0. Then it was another RBI for Roby, this time on a double to score Tostado, and it would give Augusta a 6-0 lead.

Columbia tacked on a run in the 3rd inning to make it just 6-1 Augusta, but the Jackets had an answer. It was Angulo with a fielder's choice to give the Jackets a 7-1 advantage. Columbia would add runs in the 3rd and 7th innings to make things close, but the Jackets offense was too much for the Fireflies, and they'd get the win to lower their magic number to three.

Simon Whiteman continued to find ways on-base and was the table-setter in the Jackets lineup last night. Whiteman also added his 15th stolen base of the season. He leads the team with that number.

The GreenJackets will send out Kai-Wei Teng for a Saturday night start against the Columbia Fireflies. Teng has been solid since joining the Augusta starting rotation earlier this month. In his last start against the Greenville Drive on August 26th, the right-hander delivered seven-innings of shutout baseball and he ended his night with nine strikeouts. Teng has made four starts with the GreenJackets and he has 28 strikeouts to only six walks. He was traded to the San Francisco Giants from the Minnesota Twins on July 31st. The Giants received Teng and two other prospects for reliever Sam Dyson. Teng was originally signed by the Twins out of Taichung, Taiwan in October of 2017.

Jose Butto will make his 3rd start against the GreenJackets this year. On June 2nd in Columbia, Butto held the Jackets to just three runs over six-innings of work. He came back and faced Augusta again on July 25th at Segra Park, and in that outing he went 5.2 innings while allowing four runs. He received losses in both outings. In Butto's last six starts he has only gone two-innings in each outing. This season, SAL hitters have just a .230 average against him. Butto was signed in 2017 out of Cumana, Venezuela by the New York Mets.