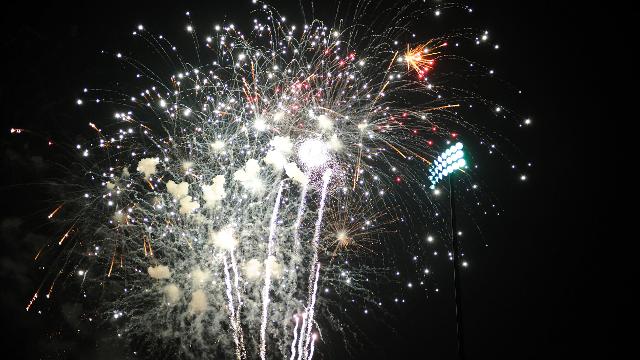 Fireworks will again light up the sky after every Friday night game at Dwyer Stadium, as well as on the annual Independence Day celebration on July 3rd. (Mike Janes/Four Seam Images)

The 2014 season is the 75th anniversary of professional baseball in Batavia. This season will feature a couple promotions to help celebrate this momentous occasion. The first one occurs every Saturday home game, as well as Sunday, August 31. At these seven games, one fan will win $75 worth of "Muck Bucks" courtesy of the Genesee County Baseball Club and the Muckdogs Booster Club. "Muck Bucks" can be used to purchase food and/or merchandise at Dwyer Stadium.

The second promotion will occur on Friday, August 22nd. When baseball came to Batavia in 1939, 3,000 fans attended the first game, which is an attendance record that still stands to this day. The Muckdogs will attempt to break this attendance record on August 22nd. If the record is broken that night, one fan could win $3,001!

The Muckdogs will again offer fans a daily menu of money-saving promotions available throughout the season.

The Daily News will continue to sponsor Muckdog Mondays. Every Monday home game, fans can purchase buy one get one free General Admission tickets with a coupon that runs in the Saturday edition of The Daily News.

The Family Four Pack will take place on every Wednesday during the 2014 season and is presented by MVP Healthcare. Fans can purchase four general admission tickets, four hot dogs, four 12-oz. sodas and a 2014 program for only $30, a savings of $16.00.

On Thursday nights, Bob Evans Restaurant will sponsor our Kids Eat Free promotion. At every Thursday home game, the first 100 kids 12 & under will receive a voucher for a free hot dog, soda and snack item.

Fireworks will again light up the sky after every Friday night game at Dwyer Stadium, as well as on the annual Independence Day celebration on July 3rd. Every Saturday will feature a pre-game concert in the concourse. These "Rock the Ballpark" events are presented by Tim Horton's of Batavia and New Buffalo Impact, with Papa and Mama Root, an oldies rock and roll tribute band, and original music recording artists. All performances begin at 6 p.m. and are weather permitting. Returning to the lineup this year is Dollar Draft Saturday presented by Eastown Beverage and Redemption Center. Every Saturday home game, 12-oz. Bug Light and Genny Light drafts will be just $1.00 from 6:00-7:00 pm.

At Sunday home games, kids can run the bases with Homer after the game courtesy of Bob Evans Restaurant. Also on Sundays, the first 100 seniors will receive a voucher for a free hot dog, soda/coffee, and a snack item courtesy of The Williams Law Firm.

Other games of note on the 2014 promotional schedule include:

The Muckdogs open their 2014 home schedule on Saturday, June 14th vs. the Auburn Doubledays at 7:05 p.m. For a complete 2014 promotional schedule, click here or call the Muckdogs office at (585) 343-5454. Muckdogs season tickets, coupon books, ticket packages and individual tickets are all on sale.