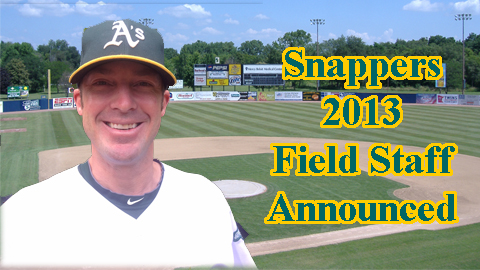 Beloit, WI- The Beloit Snappers, in conjunction with their MLB affiliate, the Oakland Athletics, are excited to announce their field staff for the 2013 season. This marks the Beloit team's first season with the 2012 AL-West Division Champion Athletics and a new beginning for Snappers Baseball. The club signed a two-year player development contract with the A's organization in September.

Ryan Christenson will take on the role of Field Manager for the Class-A Beloit Snappers. Christenson is new to the coaching staff of the A's, but is very familiar with the organization having played the bulk of his career with them from 1998-2001. He was a .222 career hitter in 452 games at the Major League level with Oakland, Arizona (2001), Milwaukee (2002), and Texas (2003). Christenson, a native of southern California, attended Pepperdine University prior to being drafted by the Athletics in the 10th round of the 1995 MLB June Amateur Draft. Most recently, he was affiliated with Foundation Sports in Lovejoy, GA as a Baseball Coach and Instructor. He currently resides in the Atlanta area with his wife and their two daughters.

Casey Myers will be the Snappers Hitting Coach as he enters his third season with the Athletics, having spent the last two seasons in Vermont. He began his coaching career as a player-coach with Oakland's Class-AA Midland Rockhounds affiliate in 2008. Selected by the A's in the ninth round of the 2001 June draft, he compiled a .291 career batting average over eight seasons in the A's minor league system. Myers makes his off season home in Phoenix, AZ.

Brian Thorson, the Snappers new Athletic Trainer, returns to the A's for his 30th season as a Trainer in the Oakland organization. He spent last season with the Vermont Lake Monsters after serving in the same role with the Class-A Burlington Bees in the Midwest League the previous year. He has also worked with other A's affiliates, Class-AA Midland and Class-A Stockton. Thorson spent five years in the Milwaukee Brewers organization prior to joining the A's. He also spent eight seasons in the Puerto Rican Winter League, attending four Caribbean Series. Thorson has worked All-Star Games in the Southern League, Texas League, California League and Midwest League as well as in Puerto Rico. Thorson is a graduate of the University of Wisconsin La Crosse. He resides in Madison, WI.

Opening Day 2013 at Pohlman Field is set for Thursday, April 11 at 6:30 pm vs. the Burlington Bees. This will be the first game to be played on the Snappers all new field installed this past fall. Continue to check our website at www.snappersbaseball.com for the latest information. Join us at Pohlman Field in 2013 for this exciting start to a new era of Snappers Baseball!