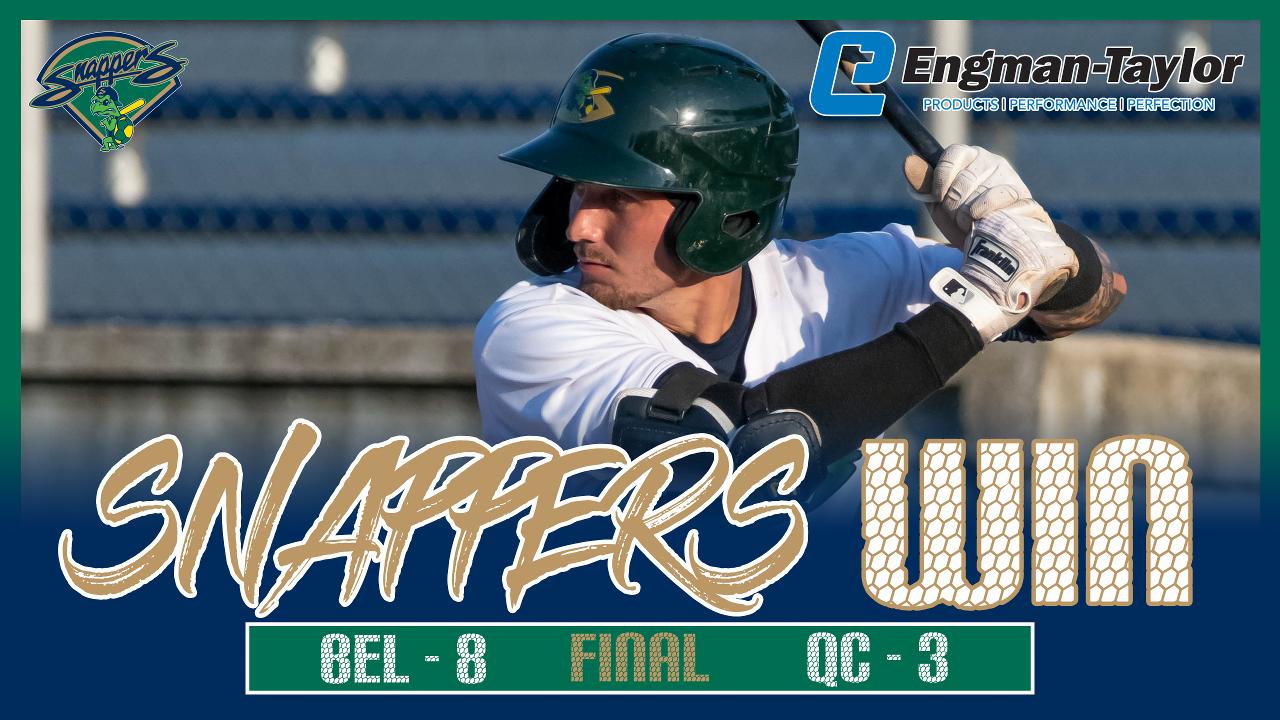 DAVENPORT, IA - Beloit jumped out to an early lead and never looked back to clinch the season series victory by winning 8-3 over Quad Cities tonight. The Snappers pounced all over the River Bandits with an 11-hit attack and 8 runs in route to securing the series win.

Beloit struck first in the contest pushing across a run right out of the gates to get the scoring started. Devin Foyle would start the hitting off with a 2-out single and then moments later, Nick Osborne would hit his first double of the game to knock in Foyle and give Beloit the 1-0 lead.

That would not mark the end of the scoring for Beloit too, as the Snappers would push across three more in the third to retake the lead. This time it would courtesy of the longball.

In the third, Max Schuemann would hit a one-out single and be followed by a walk to Foyle to put runners on first and second with an out. Then, Nick Osborne would smack his team leading 7th home run by depositing a ball over the center field wall to give the Snappers the 4-1 lead.

The Beloit bats would then erupt in the sixth inning exploding for 4 runs and extending the lead even further. However, it would not come easy as the Snappers would do all their damage with two outs in the frame.

Beloit would get runners on first and second with two outs cueing the fun to start in the inning. Joseph Pena would step up next driving a ball to right field clearing the bases with a 2-RBI double and pushing the lead to 6-1.

Beloit would not be done there as just one batter later, Max Schuemann would trade places with Pena hitting his 26th double of the year and scoring Pena to take the 7-1 lead. To cap the inning off, Devin Foyle would hit the Snappers third straight double to drive in Pena and conclude Beloit's impressive inning with the 8-1 lead heading to the bottom half.

That would be all Snappers pitching would need taking the way from there on out to secure the victory for Beloit. Snappers pitching held Quad Cities to just 3 runs, while giving up just a mere 7 hits on this evening.

Angello Infante got the start for Beloit and was absolutely marvelous tossing 5 solid innings of baseball and earning the win on the evening. Infante would give the ball up in the sixth, but not after punching out 2 and surrendering just 4 hits.

Jhenderson Hurtado would be first and last out of the bullpen earning the 4 inning save. Hurtado was marvelous as well giving up 2 runs, albeit unearned, but punching out 5 and giving up just 2 hits in a terrific outing.

Beloit will now make the trek back home to Beloit to open up a 7-game homestand at Pohlman Field. Tomorrow will be our second to last fireworks night of the year presented by Kerry and we will also have a T-Shirt giveaway courtesy of UW-Whitewater at Rock County. First pitch is scheduled for 6:30.