Shuckers sweep organizational pitcher and player of the month for June 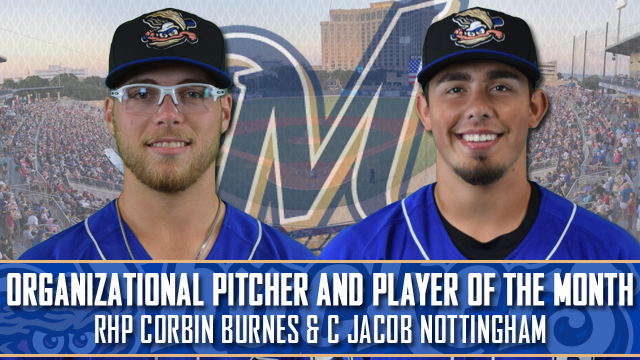 BILOXI, MS - The Milwaukee Brewers announced the minor league pitcher and player of the month for June on Tuesday with Biloxi starting pitcher Corbin Burnes  earning the Pitcher of the Month award and catcher Jacob Nottingham  being named the Player of the Month.

Burnes, 22, went 2-1 with a 1.53 ERA with five walks and 32 strikeouts for the Shuckers last month. He held opposing batters to a .165 (17-for-103) batting average. Overall, Burnes is 2-1 with a 1.27 ERA over six starts at the Double-A level this season. Over 16 starts between Biloxi and Class-A Carolina, Burnes leads Minor League Baseball with a 1.13 ERA. The Bakersfield, CA native has recorded 93 strikeouts in 95.1 innings pitched and has a 7-1 record.

The Brewers selected Burnes in the fourth round (111 overall) of the 2016 draft out of St. Mary's College.

Nottingham, 22, hit .317 (19-for-60) with eight runs, seven doubles, two homers and 11 RBI in 18 games last month. Over his last 40 games since May 1, Nottingham is batting .291. Overall, Nottingham leads the Shuckers with 18 doubles. Not only has Nottingham come on offensively, but the Redlands, CA native has been the top defensive catcher in the Southern League this season, throwing out 42% of opposing base stealers (18x43) and posting a .996 fielding percentage.

The Brewers acquired Nottingham from the Houston Astros in 2016.

The Shuckers dropped Tuesday's opener to the Pensacola Blue Wahoo 4-0 but the July 4th sellout crowd of 6,098 eclipsed MGM Park's May 13 game between the Shuckers and Mississippi Braves as the highest of the season, and tied the second-highest attendance mark in the three-year history of the ballpark. The Shuckers also drew a sellout of 6,098 fans on April 20, 2016 against the Blue Wahoos. On July 3, 2015, the Shuckers exceeded official capacity with 6,231 fans for a game against the Mississippi Braves.

The Shuckers and Wahoos return to action on Wednesday night, with Taylor Williams getting the nod for Biloxi in game two. The broadcast begins at 6:15 pm for a 6:35 first pitch on Cruisin' WGCM AM-1240/FM-100.9 and the Shuckers Radio Network. The game will also be available at biloxishuckers.com, MiLB.TV and TuneIn Radio.

ABOUT THE BILOXI SHUCKERS: The Biloxi Shuckers are the Double-A Southern League Affiliate of the Milwaukee Brewers. The Shuckers play at MGM Park in Biloxi, Mississippi. For more information, please visit biloxishuckers.com and follow us on Twitter @biloxishuckers and at facebook.com/biloxishuckers.com.