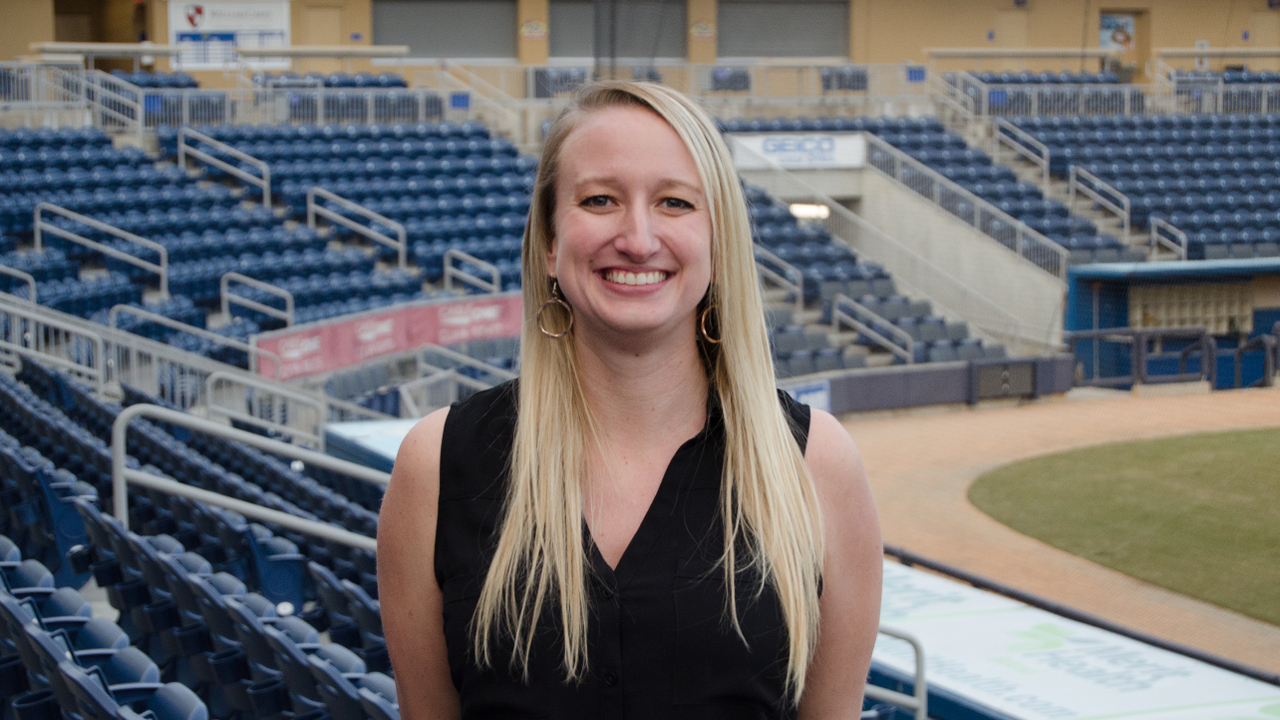 "To come here in my first season and to even be nominated was mind-boggling to me," said Thompson. "The fact that I was nominated among everyone else was an honor. To be able to say that my peers and people I worked with saw something in me and wanted to recognize me for it, I can't put into words what that means."

As the Community Relations Manager for the Shuckers, Thompson is responsible for the Shuckers community outreach program, including mascot appearances, donations and the Shuckers work with non-profit organizations. Thompson is also heavily involved with the Shuckers relationship with both Keesler Air Force Base and SeeBee Base, along with serving as a suite coordinator during game days.

"Kelsey has been an incredible representative of the Biloxi Shuckers to the Mississippi Coast and the entire Southern League," said Biloxi Shuckers General Manger Hunter Reed. "Her work ethic, positive attitude and compassion for the community has been vital to our success in 2019, and the Shuckers as an organization are thrilled that she has been recognized with this honor."

A native of Dunedin, FL, Thompson also served as the point person for the Shuckers during the 2019 Southern League All-Star Game, hosted in Biloxi on June 17 and 18 this season. Thompson helped coordinate the Opening Night Gala, All-Star Luncheon and Postgame Party which were all held at the Hard Rock Hotel & Casino.

"It was really fun to work with the Hard Rock Hotel & Casino and communicate with the teams themselves to make sure players, executives and staff knew what was going on," recalled Thompson. "We just wanted to make sure that everyone had an easy, fun couple of days down here in Biloxi. It was definitely enjoyable to show off a city that's still new to me. This city has so much to offer and to be able to show it off was the highlight of the season."

Thompson joined the Shuckers in January of 2019 after working for one season with the Corpus Christi Hooks in the Texas League as the Senior Manager of Premium Sales and Services. During her time in Corpus, she helped oversee sponsor fulfillment and coordinate outside events, including bringing Snoop Dogg to Whataburger Field in December of 2018. Thompson used her experience with outside events to help the Shuckers with the 2019 Southern League All-Star Game, but recognized the total team effort by the Shuckers front office to put on the event.

"I have to thank the entire Biloxi staff for everything that they've done this season. I also have to thank Dani Polen, who was here before me and set so many things up for the All-Star Game that it was easy for me to pick up in stride. She had everything really well organized and she made it easy to step in and take everything on."

A graduate of Vanderbilt University, Thompson spent her first six seasons in Minor League Baseball working for the Greeneville Astros, starting as a promotions intern in 2012 and 2013 before moving into a full-time role as a Sales Account Executive in 2014. She worked in the same role until 2016 when she was promoted to Assistant General manager, a post she held until the Astros ceased operation in Greeneville at the rookie level following the 2017 season.

Thompson has had a love for baseball her entire life, a passion that goes back to a connection with her father, David.

"My dad loves baseball so it's just a really special bond to have with him and to win this award and share it with him," said Thompson. "My parents helped me get down to Biloxi and they've been big supporters of mine. It's been fun to share everything in my career with them."

This is the third individual executive award for the Shuckers in their franchise history, joining former Shuckers Media Relations Manager and Broadcaster Chris Harris, who was named the Southern League Broadcaster of the Year in 2017, and Chris Birch, who was honored with the inaugural Patriot Award in 2016.