Special Jerseys Designed By Matt Stebly To Be Worn By Players, Auctioned Off During Game 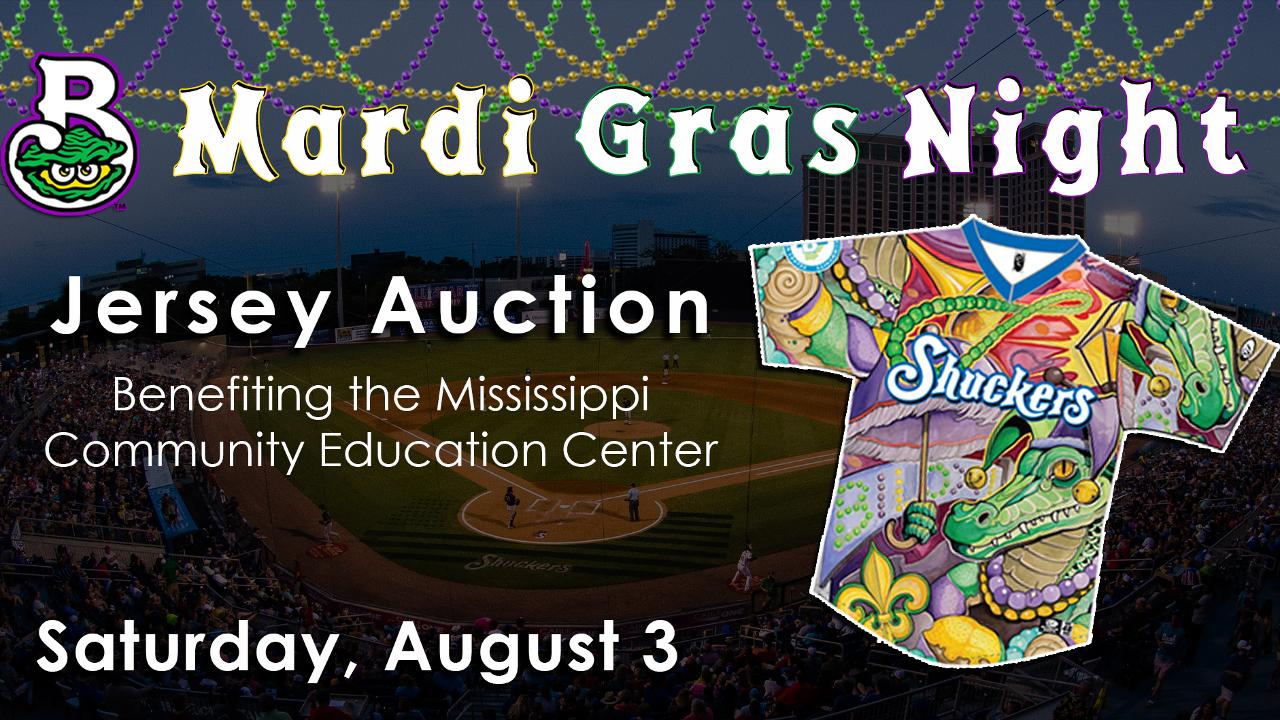 In preparation for their annual 'Mardi Gras Night,' the Biloxi Shuckers have unveiled their special Mardi Gras jerseys to be worn on August 3 against the Jacksonville Jumbo Shrimp at MGM Park. Fans will be able to bid on the game worn jerseys throughout the night.

"Mardi Gras is so important to the entire Mississippi Coast and we love bringing the party to the ballpark every year," said Biloxi Shuckers General Manager Hunter Reed. "We believe these jerseys capture the essence of the Shuckers, Mardi Gras and the way the Mississippi Coast celebrates Mardi Gras."

For a second straight year, the Shuckers Mardi Gras jerseys were designed by local artist Matt Stebly. "I'm always excited to get to work with the Shuckers to design a one-of-a-kind jersey for them to wear," said Stebly. "The last two years have both been Mardi Gras themed so that does make coming up with something new and different a little more difficult, but who doesn't love a challenge?"

The Ocean Springs native incorporated classic hallmarks of Mardi Gras including a jester-dressed alligator sporting an umbrella, plenty of beads and the vibrant colors of green, gold and purple. "I just wanted to put a cool spin on a classic Mardi Gras design," said Stebly. "I wanted the overall feel of the design to resonate with not just the Mississippi Gulf Coast but the entire Gulf Coast." Stebly, who owns Twisted Anchor Tattoo in Ocean Springs, also designed the Shuckers 2017 Coastal-themed jerseys and has designed the Biloxi Seafood Festival artwork in the past.

Fans will be able to bid on game worn jerseys throughout the night in a silent auction on the concourse. Starting in the sixth inning, the bidding will turn into a live auction in front of the Shuckers Shop. Winning bidders will go down to the field after the game to receive their jersey and meet the Shuckers player who wore it during the game. Proceeds from the jersey auction will benefit the Mississippi Community Education Center. Tickets for Mardi Gras Night are available at the Shuckers Box Office, online at biloxishuckers.com or over the phone through Ticketmaster at 1-800-745-3000. Gates open at 5:30 pm for a 6:35 pm first pitch.