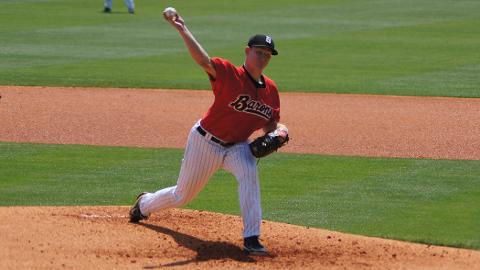 White Sox No. 4 Prospect Erik Johnson was named the 2013 Barons Pitcher of the Year. (John Shadrick)

Semien put on a virtuoso performance in his first season at the Double-A level hitting .290 (114-for-393) with 15 home runs, 16 doubles, two triples, 90 runs scored and 49 RBI in 105 games. At the time of his promotion to Triple-A Charlotte, he ranked among the league-leaders in multiple categories including ranking first in runs, walks (84), on-base percentage (.420), total bases (190), tied for first in hits (114), tied for fifth in home runs and sixth in batting average while helping to lead the Barons to the First Half North Division Championship and the team's 10th playoff appearance in the last 15 seasons.

He was particularly dominant during the month of July, hitting .372 (35-for-94) with eight home runs, nine doubles, 28 runs scored, 20 RBI and 29 walks in 26 games. He was named Southern League Player of the Week for the period from July 22nd-28th, hitting .583 (14-for-24) with four home runs, a triple, three doubles, 10 runs scored, 11 RBI and 12 walks. After being voted as the Utility Infielder on the Southern League North Division All-Star Team, Semien received the same honors again on the Southern League Postseason All-Star team.

Semien demonstrated a diverse skill set by splitting time between second base, shortstop and third base with the Barons before his promotion to Charlotte on August 1. In 32 games with the Knights, Semien hit .264 (33-for-125) with four home runs, 11 doubles, 20 runs scored and 17 RBI. Semien's tremendous all-around season earned him a promotion to the Chicago White Sox after rosters were expanded on September 1st. He collected his first Major League hit in his very first big league at-bat against former Cy Young Award winner CC Sabathia in Yankee Stadium.

Prior to the start of the postseason, Semien was named the 2013 Southern League Most Valuable Player, joining Aaron Miles (2002) and Joe Crede (2000) as former Barons to take home the league's top individual honor.

In his first season at the Double-A level, Johnson helped lead the Barons to the Southern League's best record and a first half North Division Championship going 8-2 with an ERA of 2.23 (21 ER/ 84.2 IP) over 14 starts. At the time of his promotion he led the Southern League with 8 wins and ranks among the league leaders in numerous categories including WHIP (1st, 0.92),complete games (1st, 3) innings pitched (2nd), opponents average (2nd, .189), ERA (2nd) and strikeouts (3rd, 74).

Johnson was especially dominant at home going 5-1 with a 1.06 ERA in seven starts at Regions Field. He had scoreless outings in six of his 14 starts and won each of his last six starts while posting an ERA of 1.83 (8 ER/39.1 IP).

Johnson was promoted to Charlotte on June 23rd where he continued to dominate going 4-1 with a 1.57 ERA (10 ER/57.1 IP) with 57 strikeouts in 10 starts. He joined Semien with the White Sox after September call-ups and recorded his first Major League win on September 17th against the Minnesota Twins.