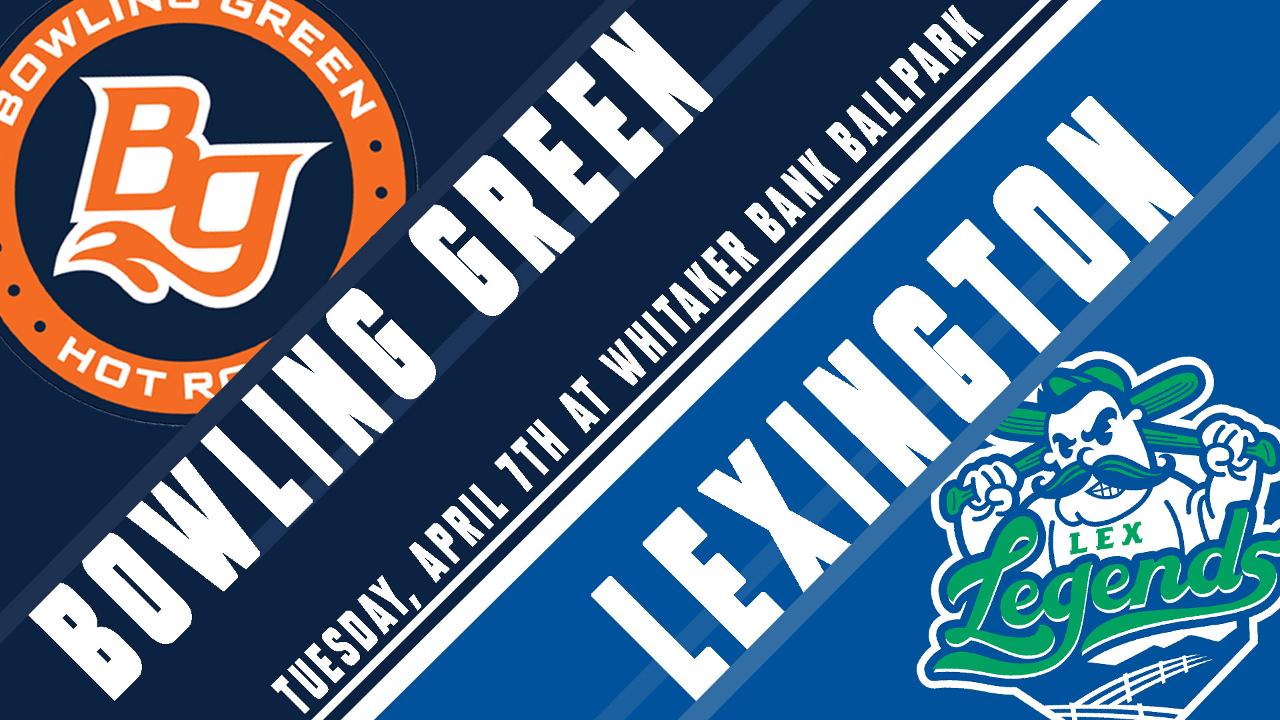 Bowling Green, KY - The Bowling Green Hot Rods (Class-A Midwest League Affiliate of the Tampa Bay Rays) and the Lexington Legends (Class-A South Atlantic League Affiliate of the Kansas City Royals) are excited to announce an agreement to play an exhibition game between the two clubs on Tuesday, April 7th, 2020 at Whitaker Bank Ballpark. The game will take ahead of the 2020 Minor League Baseball regular-season opener in Lexington, KY with a two-year agreement that has the game coming to Bowling Green Ballpark in 2021.

The idea came from a comment on social media that turned into a conversation between Hot Rods GM/COO Eric C. Leach and Legends President/CEO Andy Shea. Leach, a former member of the Legends front office staff, worked with Shea early on in his career with Lexington so the lines of communication were already open.

"With both teams playing in the great state of Kentucky, it only makes sense that the Hot Rods and Legends would come together to give fans what they really want", Leach said. "Everyone enjoyed the rivalry during our inaugural season (in 2009), and after a fan mentioned the idea on Twitter, Andy and I got together to make it happen."

"We are thrilled to bring back the rivalry from 2009. It will be extra special with two championship-caliber organizations with the Hot Rods winning the Midwest League in 2018 and the Legends going back-to-back in the South Atlantic League in 2018 and 2019," said Shea.

"The Kansas City Royals have been excited about the opportunity to play an exhibition game with Bowling Green from the time Andy Shea asked if we'd like to participate in the game. Being part of an inter-league game with two affiliates from the state of Kentucky will be a unique experience for our players. It will also be something Legends fans will enjoy and will give the fans a preview of our team prior to the opener just a few days later," said Kansas City Royals Vice President/Assistant General Manager - Player Personnel, JJ Picollo.

The game pits two championship-winning franchises against one-another after the Legends captured the 2018 and 2019 South Atlantic League titles while the Hot Rods did the same in the Midwest League in 2018. The two teams played one another 18-times in 2009, the lone year Bowling Green was a member of the SAL during their inaugural season. Lexington won the season-series 12-6 as an affiliate of the Houston Astros. Bowling Green was represented by future big leaguers Tim Beckham and Matt Moore while the Legends sent five future MLB players to the field.

The game will be included in all Legends season ticket holder and flex plans. Fans can purchase a Stables package that includes a ticket and food for just $27. Suites are also available through the Legends.

About the Hot Rods: The Bowling Green Hot Rods are the Class-A affiliate of the Tampa Bay Rays and a member of the Midwest League since 2010 and will host the 2020 Midwest League All-Star Game. Since moving into Bowling Green Ballpark, the Hot Rods have combined affordable, family fun along with championship-caliber teams to entertain fans of all ages in South Central Kentucky. The 2020 season will be the Hot Rods 12th and fans can get their tickets by calling 270-901-2121 or visiting www.bghotrods.com.

About the Legends: The Legends, a Class A affiliate of the Kansas City Royals and member of the South Atlantic League, play all home games at Whitaker Bank Ballpark in Lexington, Kentucky. The Legends are three-time SAL champions, going back-to-back in 2018 and 2019. For ticket information, call (859) 422-7867 or visit LexingtonLegends.com.

Hot Rods ticket packages for the 2020 season are on sale now! Fans can choose from a Holiday pack that includes six tickets and an All-Star shirt for $60 and an All-Star Holiday Pack with six tickets, tickets to both the 2020 Midwest League Home Run Derby and Fanfest, as well as an All-Star Game ticket and a tee-shirt for $85! Individual tickets will be available beginning in February 2020. For the event package information please visit www.bghotrods.com or call 270-901-2121.