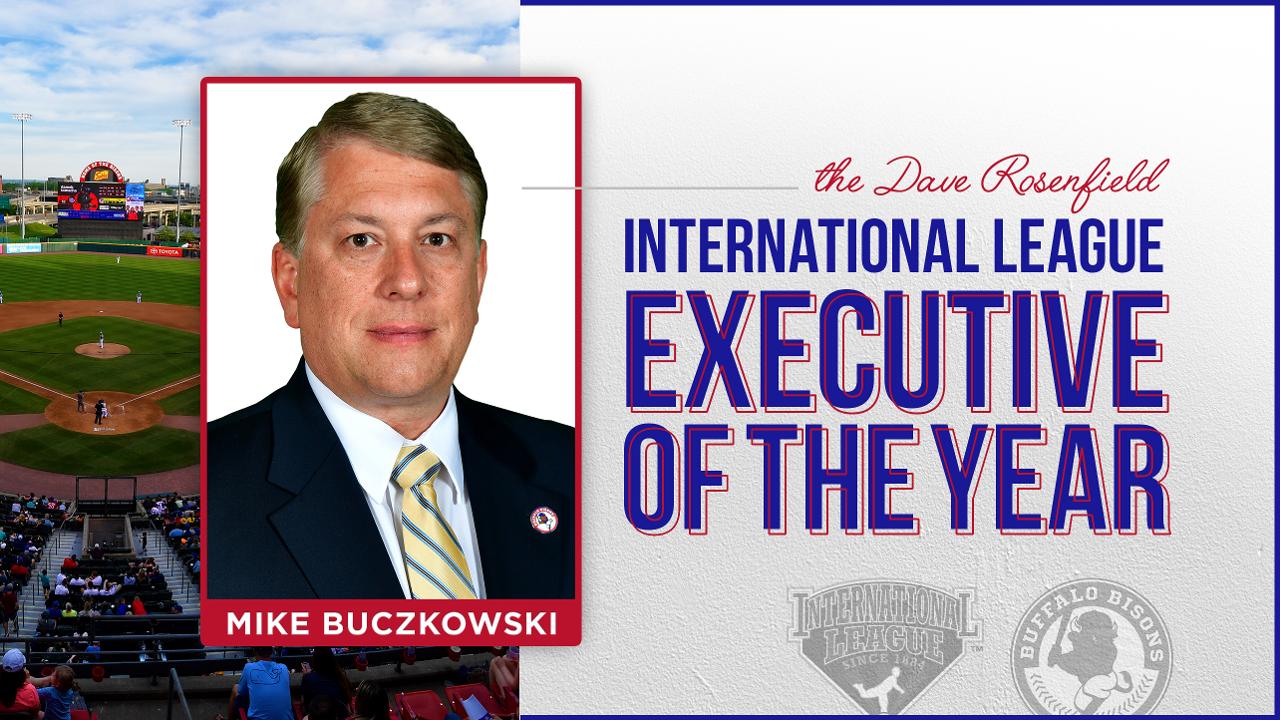 The International League today announced that Buffalo Bisons General Manager Mike Buczkowski has been elected as the 2019 Dave Rosenfield "Executive of the Year."

The award, voted on by the general managers and club officials from the 14 teams in the International League, will be officially presented to Buczkowski at this year's Baseball Winter Meetings in December.

"The 2019 season was a special one in Buffalo for a number of reasons including a new naming rights deal for the ballpark and new records in both sponsorship and group ticket sales and these successes are a testament to Mike's vision," said Randy Mobley, President, International League. "Mike continues to be a valued, highly respected leader in the International League boardroom and I am thrilled that his colleagues have honored him with this well-deserved recognition."

"Mike's talent was apparent when he started for us thirty years ago as a PR assistant and has only grown over time," said Mindy Rich, President, Rich Entertainment Group. "It's so satisfying to see him receive this well-deserved recognition from his colleagues."

"Bucz is a true 'baseball guy' with a passion for the hospitality side of the game and the art of customer service, as well. Bison players and fans alike have come to realize that, over the 30 years that he has been a part of our team. We are a far better club because of his leadership."

Buczkowski just completed his 26th season as the Buffalo Bisons general manager, the longest tenure of any GM in the 135-year history of the franchise. During that time, the Bisons have led the International League in attendance seven times and have drawn better than a half-million fans in each season since Buczkowski was promoted from Assistant GM in 1994.

Under Buczkowski, the Bisons name has become synonymous with family-friendly entertainment in a safe and clean environment for the community to share. With the goal of also providing fans with the absolute best value in town, the Bisons have continually delivered great ballpark events and fun promotions to their fans despite the top individual ticket price increasing less than $7.00 in the 26 years of Buczkowski's tenure.

In recent seasons, Buczkowski has expanded the Bisons brand to attract even more fans outside of Western New York, with nearly 25% of the team's attendance coming from Southern Ontario. The team also attracts thousands of additional fans to the ballpark when the Bisons are on the road thanks to a number of non-game day events.

Prior to this past season, Buczkowski was also promoted to the role of President of Rich Baseball. Now, he oversees the operations of not only the Bisons, but the Double-A Northwest Arkansas Naturals of the Texas League and the Single-A West Virginia Black Bears of the NY-Penn League. Combined, the teams welcomed 866,416 fans to their ballparks in 2019.

A native Buffalonian, Buczkowski is a board member of the Buffalo Bisons Charitable Foundation as well as the Greater Buffalo Sports Hall of Fame and the Western New York United Against Drug & Alcohol Abuse Foundation. He also serves on the marketing committee for Triple-A Baseball.

Buffalo Bisons Front Office League Awards
Under the ownership of Rich Products, the Buffalo Bisons front office has been recognized several times for being leaders in the baseball industry. The organization has twice been awarded the Baseball America Bob Freitas Award for overall operational excellence (1991, 2001) and was given the 1992 John H. Johnson Presidents' Trophy for being the 'Most Complete Franchise.' Bob Rich Jr. was the 1986 American Association's Executive of the Year and the 1988 Sporting News Minor League Executive of the Year, the same year that Mindy Rich was named Rawling's Minor League Female Executive of the Year. In 2012, the late Frank Mooney was awarded the IL's 'Spirit of the International League Award.