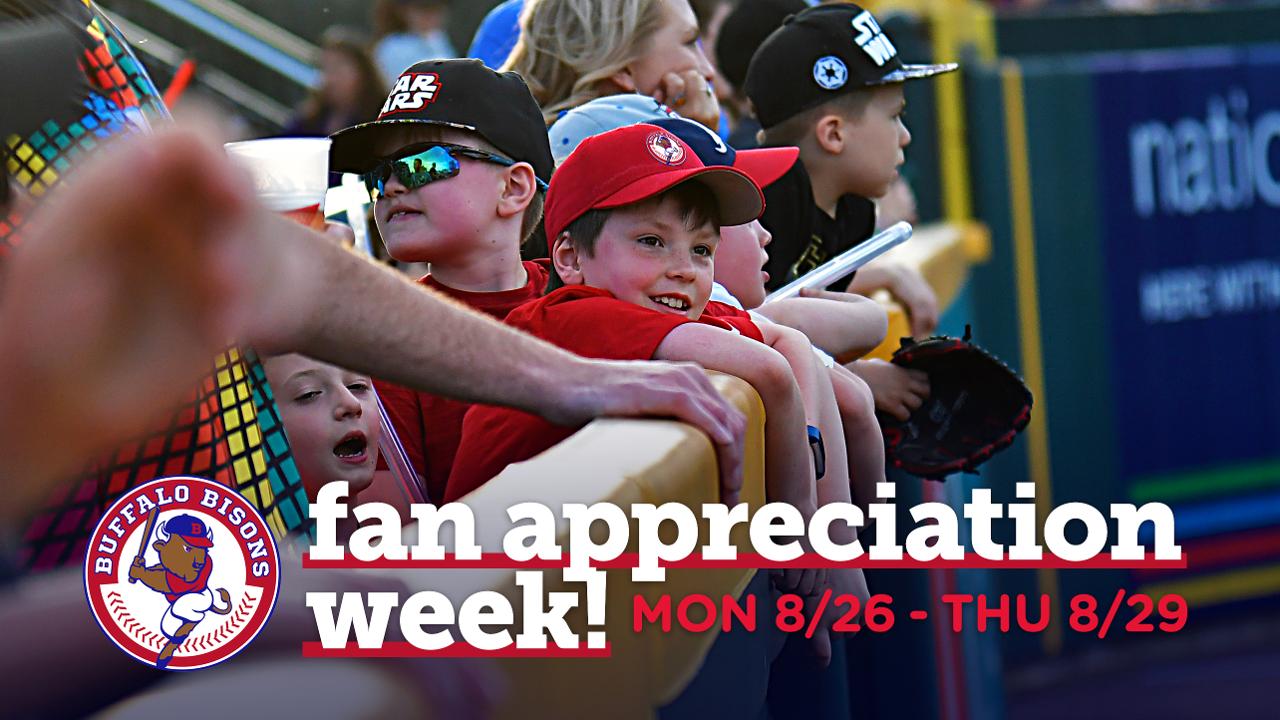 The Buffalo Bisons today announced that they have expanded one of their most popular events with the creation of Fan Appreciation Week at Sahlen Field, Monday, August 26 - Thursday, August 29, as the Herd hosts the Rochester Red Wings for a four-game series.

While the final home regular season game of the season on Thursday, August 29 will remain the traditional Fan Appreciation Night, presented by Aesthetic Associates, the Bisons have announced they have Added Great New Promotional Elements to each of the final four home games of season, giving fans even more reasons to get down to the ballpark one more time this season.

>>>Check out all the added promotions | Get My Tickets<<<

With the push for the postseason in full force, the Bisons host the Red Wings in a critical four-game series starting Monday, August 26. Here's what is on tap and what has been added to each of the four games of Fan Appreciation Week.

For the last Markdown Monday of 2019, game tickets purchased in advance are only $9 ($11.50 day off) and fans can enjoy $1 ice cream and $1 popcorn all game. As a Tops Dog Day at the Ballpark, all dogs are allowed in for free with any adult ticket purchase and all fans can take part in a pre-game Dog Parade around the warning track.

FAN APPRECIATION WEEK BONUS: Receive Buy-One, Get-One Free Tickets with the donation of a new/gently used book to the Buffalo & Erie County Public Libraries. With the donation, fans will also receive $5 OFF the purchase of 'Celery's Greatest Race' children's book.

For the 12th annual Mystery Ball, fans the opportunity to purchase one of 500 autographed baseballs from sports starts and celebrities that have been gift-wrapped to conceal their identity. The Oak St. Gate opens for Mystery Ball at 6:00 p.m., in partnership with Roswell Park Comprehensive Cancer Center.

For the final time this season, the Bisons will become the 'Buffalo Wings' for a game, presented by (716) Food and Sport. Save $2 on every ticket when you present a (716) Food and Sport receipt at the Sahlen Field Box Office and there will also be wing specials all game lone.

The team's annual Fan Appreciation Night, presented by Aesthetic Associates, will include a Giveaways Every Inning, including a set of new tires from Dunn Tire and team jerseys, as well as one of the largest Firework Shows of the season. Gates will open at the special time of 5:00 p.m. for fans to enjoy one last Resurgence Brewing Happy Hour (5-6:30 p.m.) with $3 craft beers.

FAN APPRECIATION WEEK BONUS: The Bisons have put a limited number of $5 General Admission Tickets on sale for this game.

For all games of Fan Appreciation Night, the giant inflatable Labatt Can from the team's Labatturday promotion will be set up. If a Bisons player hits a home run that hits the can during the week, one lucky fan will be Beer for a Year!