A's get Nottingham, Mengden for Kazmir

Former Astros prospects were thriving at Class A, Class A Advanced 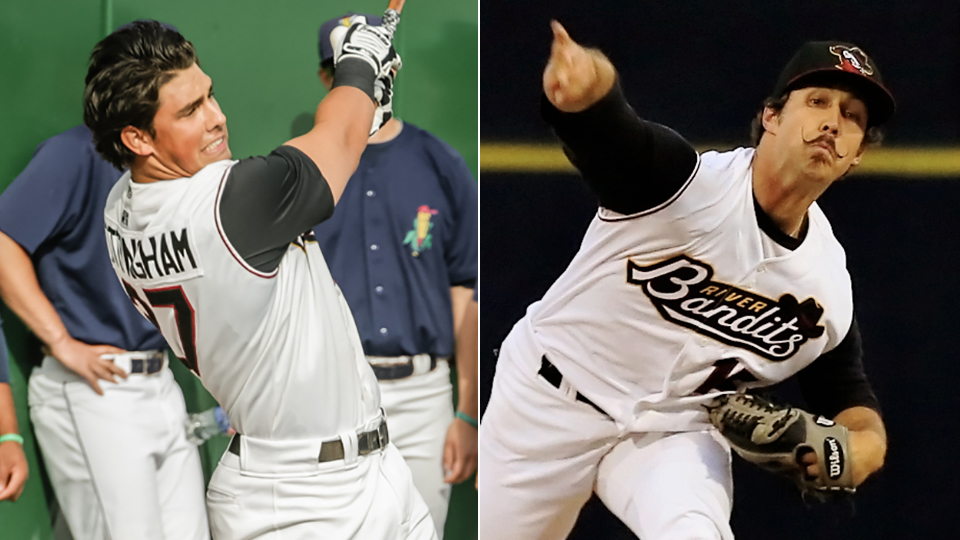 Jacob Nottingham and Daniel Mengden have both played at Quad Cities and Lancaster this season.

After six straight seasons at or near the cellar of their division while they built up a stockpile of talented prospects, the Astros are buyers in late July. On Thursday, they acquired left-handed starter Scott Kazmir from the A's. The price: two top-30 prospects.

The Astros traded No. 22 prospect Jacob Nottingham (he's now ranked No. 5 in the A's system) and No. 19 prospect Daniel Mengden to the A's on Thursday, both clubs confirmed.

Despite their MLB.com rankings prior to the trade, Nottingham is perhaps the bigger get of the two, given the way he's broken out at the plate in his third season in the Astros system. The 20-year-old catcher has put together a .326/.383/.558 line with 14 homers, two triples, 24 doubles and 60 RBIs in 76 games between Class A Advanced Lancaster and Class A Quad Cities with most of those coming at the latter level. A right-handed slugger, the 2013 sixth-round pick out of a California high school hit just .230 with five homers and a .692 in 48 games at Rookie-level Greeneville a season ago.

Nottingham's best tool is his power, which received a 55 grade from MLB.com even before his breakout 2015 campaign, and although there are questions about his defense behind the plate, he's thrown out 20 of 50 (40 percent) would-be basestealers. If his receiving skills don't improve, there's a chance his future could be in a corner outfield spot, given his bat and arm, although the Astros gave him time at first base this season as well.

Mengden, a fourth-round pick out of Texas A&M last year, was in the midst of his first full season in the Astros system before Thursday's deal. The 22-year-old right-hander started the year at Class A Quad Cities where he posted a 1.16 ERA -- thanks to a string of five straight scoreless starts in April and May -- with 36 strikeouts in 38 2/3 innings. His 5.26 ERA in 49 2/3 innings at Lancaster isn't nearly as pretty, though it might be inflated by the hitter-friendly California League. The 6-foot-2 hurler has a low-90s fastball with a slider, a curveball and a changeup also in his arsenal.

Both players are likely ticketed for Class A Advanced Stockton in the A's system. The Ports start a four-game series in Lancaster on Thursday, meaning Nottingham and Mengden won't have to travel far to join their new teammates.

Kazmir was 5-5 with a 2.38 ERA, 101 strikeouts and 35 walks in 109 2/3 innings with the A's before Thursday's deal. A Houston native, the 31-year-old southpaw will pitch for his fifth Major League team -- and third in the American League West -- following stints with the Rays, Angels, Indians and A's.