JetHawks catcher focused on baseball while exploring other ambitions 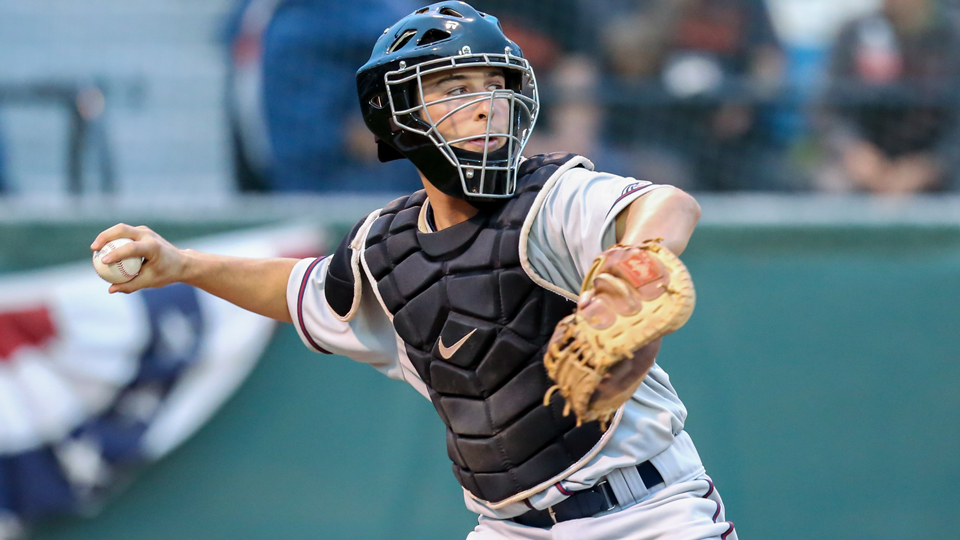 Garrett Stubbs nailed 11 of 16 would-be base stealers in his first 19 games in the Cal League. (Tim Cattera/MiLB.com)

"I'm a big fan of not putting all your eggs in one basket. I like to always have Plan B and Plan C and so forth," he said. "I have a 100-percent commitment into baseball while also knowing I have things to fall back on if baseball doesn't work out. Or baseball may work out, but people don't play baseball until they're 80."

The 23-year-old native of San Diego does have the tools and makeup to play for a long time, though.

After making it known in 2014 -- his junior year at the University of Southern California -- that he wanted to finish school and play college ball as a senior, Stubbs was taken by Houston in the eighth round of last year's Draft. His defense behind the plate was described as "almost acrobatic" by the Los Angeles Times, and he won the Johnny Bench Award as the nation's top collegiate backstop in 2015. Through 30 games of his first full professional season, he was batting .292/.394/.491 with five homers and eight steals while serving as Lancaster's regular catcher.

Off the field, Stubbs is a digital entrepreneur -- a path that emerged unexpectedly in college. Hanging out with friends during his sophomore year, Stubbs hit upon an idea that led him in a direction he'd never imagined.

"We were all sitting in my room watching the USC football game," he said. "I made kind of this gentleman's bet, like, 'I bet you [Cody] Kessler throws a touchdown right here.' All of a sudden, Kessler throws a touchdown. I got to thinking -- obviously betting on college football isn't allowed, but hypothetically, what if somehow we were able to bet that? Then I got to thinking, 'What about a platform that allows you to make friendly wagers on single plays within sporting events?'"

After much hard work, such a platform now exists in the form of an app. The beta version of Gentleman's Call launched in October and allows users to make friendly play-by-play wagers with points, not money, during college football games.

"You can play along through an entire game or just one play," said Stubbs, a co-founder. "You can say your team's going to run for a gain, or if they're kicking a field goal, you can wager if it's going to be good or no good. You can make individual wagers, and it tracks the points over the course of a game and a season. Each play costs five points, and you start with 100. You're rewarded either 15, 25 or 30 points based on the difficulty of the play."

Between initial conception and beta launch was a lot of work, and a lot of learning. Stubbs' degree is in policy, planning and development with a real estate emphasis, and before he started work on the app, he didn't have much knowledge of the tech sector.

"I had zero tech background, but you get introduced to people," he said. "When you meet the people around you, everything is possible. I knew I could fill that void in my background by working with other people. Baseball taught me that -- it taught me a lot about working with a team. In baseball, you don't do everything yourself."

His recruiting started on campus, where he enlisted friend and former teammate Chris Corsini. Eventually, they connected with San Diego-based software professionals Jan Anton and Brendan Boyd, who also brought in a developer based in India. If starting an app while also completing a college degree and starring on a Pac-12 baseball team sounds ambitious, Stubbs was up for the challenge.

Although he admits he's been "really focused on baseball" since the Draft, he remains committed to seeing where his real estate interest and tech ambitions take him, and he wouldn't want to give up on either just because that would be easier.

"Lots of people think of things in their daily lives, like, 'That would be a cool thing to have,' whether it's an app or some other kind of invention. The problem is so many people don't pursue it. Whether it's a good idea or a bad idea, you never really know until you actually pursue it," he said. "[With the app], I went ahead and tried. Hopefully it will work out and it will become something people love to use every day."

He believes, too, that his app experience could lead to other tech-related ventures down the road.

"It opened a new door," he said. "Meeting Brendan and Jan and the developer, that brought me into a new world, even though I never thought in a million years I would go into tech, because that's not how my brain works, but with the right people on a team, you can do anything."

Only in the Cal League: At Lancaster's the Hangar on Thursday night, the Jethawks set a franchise record for runs in a game, beating the Ports, 29-11. Lancaster had an eight-run fourth inning and scored seven runs in two other frames. Stockton, in the meantime, is on a skid. The defeat in the series' rubber game gave the Ports their eighth loss in 10 games, and they dropped two straight to start Memorial Day weekend.

Marking the time: The Cal League is celebrating its 75th anniversary this year, and on Saturday night the Rawhide celebrated a different anniversary -- 70 years of baseball at Visalia's Recreation Park. Fans with 70 or more years of life experience were granted free admission, and there was a pregame flyover by the Lemoore Naval Air Station. The team wore throwback jerseys on the field, and fans had the chance to win up to 70 prizes throughout the game, including a trip to the California League-Carolina League All-Star Game on June 21 in Lake Elsinore.

66ers get into gear: It has not been an easy beginning of the season for Inland Empire. The 66ers finished Memorial Day at 18-34, worst in the Cal League and sixth-worst in all of Minor League Baseball. There is, however, cause for optimism. Inland Empire has broken even (7-7) since May 16, and on Sunday night the club beat Bakersfield, 10-7, while setting season highs in runs and hits (17) and getting at least one base knock from every player in the starting lineup.