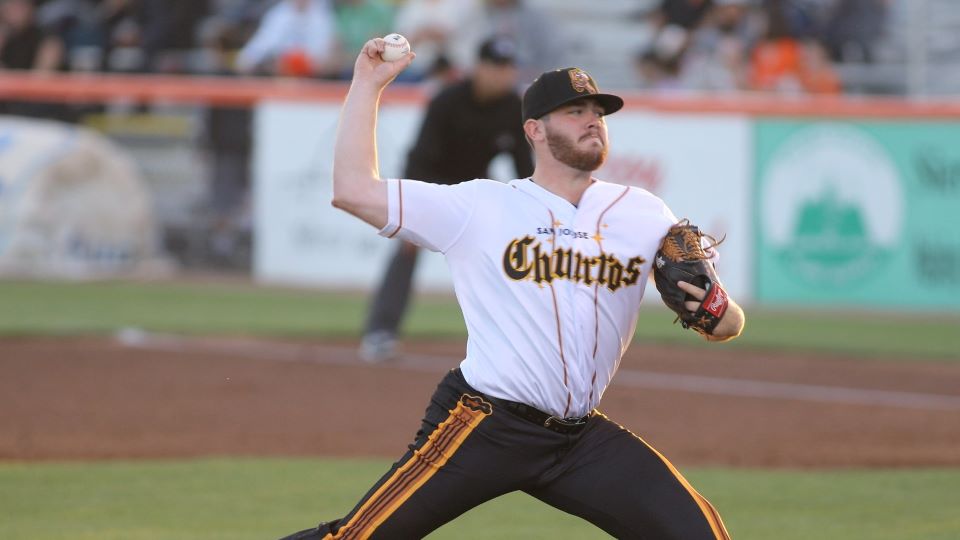 Matt Frisbee's 11 strikeouts were the most in an outing by a San Jose pitcher this season. (Shelly Valenzuela/San Jose Giants)

Good luck trying to score when Matt Frisbee is on the mound. Lately, it's been impossible.

The right-handed San Francisco prospect struck out a career-high 11 while scattering six hits and two walks over seven innings in Class A Advanced San Jose's 2-0 win over Lake Elsinore on Wednesday. Over his last 24 innings, Frisbee (8-7) has not allowed an earned run, striking out 26 and walking just five.

The 22-year-old has had a solid first year of professional ball, but he started dominating at the end of July and that has carried over into August. Frisbee has lowered his ERA to 3.36 -- his lowest mark of the season since April 23. But if you ask him how he's managed to stump his opponents lately, he won't attribute it to his slider -- his signature pitch. Instead, he'll tell you about his fastball.

"I've gotten my fastball where I've wanted it to be," Frisbee said. "My go-to pitch is my slider and I trust that with everything I've got. Being able to set that up with my fastball command helps me get through the game. Some of these teams are aggressive in the beginning, so if I can locate my fastball, most of the times they'll get themselves out if I make the pitch I want to make.

"I've always been able to locate my fastball, but after a while, it got to where the majority of the time it wasn't where I wanted it to be. I worked through the week -- one day, I would focus on the glove side, the next day, I'd focus on arm side. Doing that helped me so much. It built trust in myself and trust in my work and it shows on the mound."

The UNC Greensboro product blanked Lake Elsinore for his second consecutive start. On Aug. 1, Frisbee allowed three hits while fanning four over seven innings against the Storm. He took it up a notch Wednesday.

The 6-foot-5 right-hander needed only pitches to get through the first inning -- whiffing the second batter of the game, Ruddy Giron, on three straight pitches for his first strikeout. In the second, Frisbee surrendered a two-out free pass to Jack Suwinski, but he froze Olivier Basabe on a called third strike to end the inning.

The Storm threatened to end shutout streak the next frame when Aldemar Burgos reached on a fielder's choice and MLB.com's No. 78 prospect Xavier Edwards laced a first-pitch single with one out to move Burgos into scoring position. But Frisbee was unfazed, striking out Giron for the second time on three pitches and inducing a flyout from San Diego's ninth-ranked prospect Luis Campusano to escape the jam.

The 2018 15th-round pick pitched around his second walk to Suwinski in the fourth and faced the minimum in the fifth. He allowed two singles by Campusano and Eguy Rosario in the sixth, but got Suwinski to fly out to end the frame. In his final inning, Frisbee gave up a leadoff single to Basabe, but struck out the side -- No. 22 Padres prospect Jeisson Rosario, Burgos and Edwards -- to end his outing.

It wasn't until after the game had ended that he learned about his strikeout milestone, though.

"I didn't know about it, so that probably tells you about my mind-set during the game," Frisbee laughed.  "I had a plan at the beginning of the start from facing them last week. I was able to execute and went from there."

After debuting with Class A Short Season Salem-Keizer last year, the North Carolina native made four starts with Class A Augusta to start this season before moving up to the California League. He takes pride in his stamina through his first full year, especially at a time in the season in which many pitchers are fading out.

"The last month has been great," Frisbee said. "After the All-Star break, I needed to figure out my workload and what I needed to do to get through the season. Being my first full season, I had to figure out something so that I wouldn't be so tired come August. Slowing down on things -- like my bullpen -- starting fresh before my starts, and slowing down on some unnecessary throwing during the week [has helped].

"All the conditioning you do in the offseason, this is where it shows. Work ethic and honing in on things to do in the stretch down the season is really helping myself."

Giants No. 16 prospect Sandro Fabian plated the first run of the game in the fourth, driving in David Villar on a two-out single. Heath Quinn added an insurance run two innings later, clubbing a homer to lead off the sixth.

Tyler Schimpf struck out four over two hitless innings in relief to pick up his first California League save.