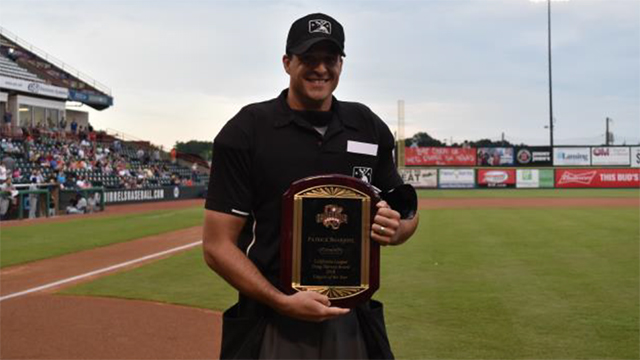 Patrick Sharshel is wrapping up his fifth season as a Minor League umpire. (California League)

OXNARD, Calif. -- The California League, the only league in Minor League Baseball to honor an umpire, announced its award for Umpire of the Year. The Doug Harvey Award, named after the 2010 Baseball Hall of Fame inductee and resident of nearby Visalia, was instituted as an annual award in 2010 and given to the Cal League Umpire of the Year.

In a pregame ceremony at The Diamond, home of the Richmond Flying Squirrels, Patrick Sharshel was presented the seventh Doug Harvey Award. Sharshel is in his fifth season as a Minor League umpire. The 26-year old from Colorado was promoted to the Eastern League in August.

"Congratulations to Pat Sharshel for being the seventh recipient of the Doug Harvey Award," California League president Charlie Blaney said. "Pat works as hard as anyone out on the field and he is well deserving. The Cal League sincerely thanks Doug Harvey for lending his name once again to this prestigious award."

Sharshel was the top vote-getter as voted on by Cal League managers, who know and work with the umpires more than anyone else. The 2016 season will be memorable for him. Besides getting promoted to Double-A and winning the Cal League award, his wife gave birth to a son in July.

Harvey was a Major League umpire for 30 years and umpired in five World Series, six All-Star Games and nine National League Championship Series. He was nicknamed "God" by players because of his strict focus on the rules of the game. Harvey was ranked as the second-greatest umpire in history, according to the Society for American Baseball Research, behind only Bill Klem. In 2007, Referee magazine selected him as one of the 52 most influential figures in the history of sports officiating.

Harvey began his professional umpiring career in the Cal League in 1958 and umpired there for the 1959-60 seasons before moving up to Triple-A.

About the Cal League: