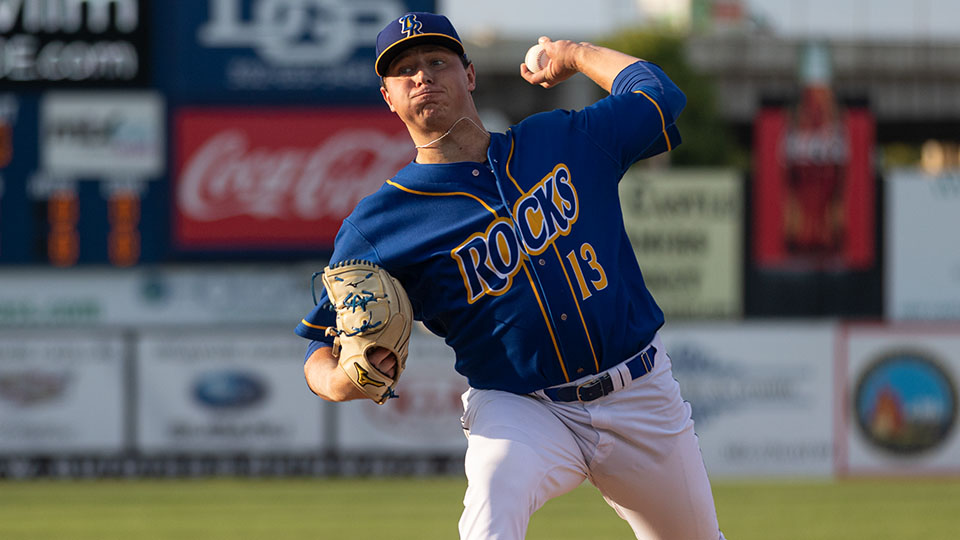 Wilmington had its back against the wall in the Mills Cup Finals, but pitching coach Steve Luebber had no doubt that Austin Cox would come through. Sure enough, the left-hander kept his team alive.

The Royals' No. 21 prospect took a no-hitter into his final frame, allowing one knock over six innings, as the Blue Rocks forced a decisive fifth game in the Carolina League Championship Series with a 2-0 blanking of Fayetteville on Friday at SEGRA Stadium.

Cox (1-0) threw 59 of 98 pitches for strikes and limited the Woodpeckers to a single and three walks while fanning six. The gem came after he struck out eight over six scoreless innings in his first playoff start on Saturday against Salem.

The southpaw allowed a leadoff walk to ninth-ranked Astros prospect Jeremy Pena but set down the next 13 batters before Miguelangel Sierra drew a one-out free pass in the fifth. Cox responded by striking out Michael Papierski and retiring Ruben Castro on a groundout to end the inning.

With the no-hitter intact in the sixth, Pena broke through with a one-out single to left. Marty Costes drew a two-out walk to put the pressure on Cox, who whiffed Chandler Taylor to close the inning and his night.

"Once he got here and got an outing or two under his belt, it's been some just minor things that he's changed. He's done a great job," the pitching coach said. "He competes tremendously. He had a great look in his eye. We were not worried about him going out there in this situation at all."

It was the third scoreless outing in four tries for the 2018 fifth-rounder, who had a 2.77 ERA in 11 games -- 10 starts -- after he was promoted from Class A Lexington on June 23. The slight tweaks Cox made came down to his arm slot, which the Wilmington staff has worked on refining.

"Because he's a curveball guy, sometimes he'll get his delivery started and he wants to get a little high with his arm slot," Luebber said. "We kind of got him to be aware that his natural throwing motion is not that high, and that's really helped his ability to drive the ball to the plate better and not spike balls low. He's really taken it and he seldom gets off track at this point."

Friday's outing was another in a long line of memorable performances for a Wilmington team that led the Carolina League with a 3.00 ERA and 1.18 WHIP, and it gave the Blue Rocks a chance to play for the title.

"It's been a treat, no doubt, but it's what a lot of our scouting people and front office envisioned," Luebber said. "Despite the fact we sent some people to Double-A, the people that have come up have performed well, too -- relievers and starters."

Jojanse Torres (0-1) nearly matched Cox on the mound, but ninth-ranked Royals prospect MJ Melendez homered in the second to put the Blue Rocks ahead. That was the only run the Woodpeckers starter allowed, surrendering three hits and two walks while striking out six in six innings.

Wilmington added an insurance run in the ninth when Cristian Perez delivered an RBI single to left.

Game 5 is Saturday in Fayetteville.