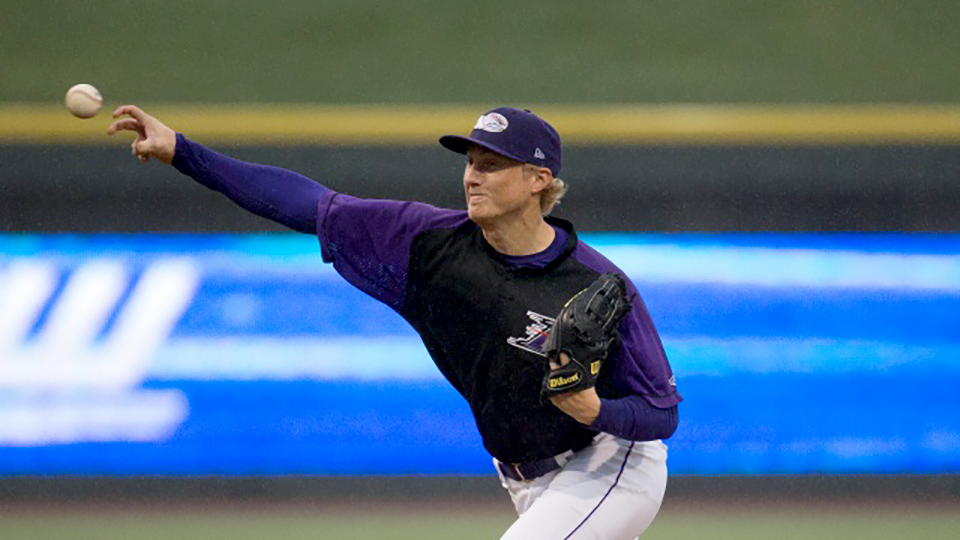 Now in his third season, James Dykstra is 11-11 with a 3.22 ERA during his Minor League career. (Jody Stewart/W-S Dash)

It's a good time to be a Dykstra.

On April 8, the Rays called first baseman Allan Dykstra up to the big club for his Major League debut after spending seven seasons in the Minors with the Padres and Mets. A week later, his younger brother, James, attempted to one-up him in the only way a Class A Advanced pitcher can.

He threw a no-hitter.

The 24-year-old White Sox prospect accomplished the feat Wednesday afternoon as Class A Advanced Winston-Salem beat Potomac, 1-0, in the first game of a doubleheader. It was the day's second no-no after three Class A West Virginia hurlers combined on one in a 1-0 loss to Hagerstown.

No-hitters are impressive, no matter which way you cut them, but Dykstra's feat gets a little added bonus: the ball never left the infield off the bat of a P-Nats hitter and he didn't pitch once from the stretch. His lone walk came to Rafael Bautista in the fourth inning, and even then, he picked off the Potomac leadoff man before throwing a pitch. Of the 17 balls the Nationals put in play, 14 were on the ground and were gobbled up by Dash infielders. Two were popups and one was a lineout.

What's more, it took Dykstra only 71 pitches to complete his seven-inning gem -- the first no-hitter he said he's thrown in his baseball life.

The ground ball has been Dykstra's specialty since the White Sox took him in the sixth round of the 2013 Draft. The right-hander has developed a sinker-cutter-changeup-curveball mix that has led to a career 2.45 groundout-to-airout ratio in the Minors.

"I'm not a strikeout guy, I know that," said Dykstra, who's averaged 7.2 strikeouts per nine innings in his career. "I'm more of a ground-ball guy, so that's what I know I need to get for things to work.

"This no-hitter wouldn't have happened without my defense, so this was really more for them. I know if [third baseman] Trey Michalczewski wouldn't have caught that line drive [in the fifth], it would have been all over."

The no-no almost ended in the final frame. Nationals No. 8 prospect Wilmer Difo, who attempted to bunt for a hit in the fourth, hit a slow roller toward Dykstra with one out in the seventh. The pitcher came off the mound to nab the 70-grade runner and the throw to first baseman Keon Barnum was slightly up the line, but Difo was called out for running out of the baseline, negating what could have been a close call for both umpire Erich Bacchus and the G. Richard Pfitzner Stadium official scorer.

"He was basically running on the infield grass, so the call was obvious," Dykstra said.

When the Dash starter got Christoper Bostick to ground out to short to end the game, he expected some sort of celebration but found only second baseman Justin Jirschele running toward him. It took a while for the moment to kick in for everyone else.

"People were like, 'Oh, what?'" Dykstra said. "I think because it was a seven-inning game and we're not used to that, a lot of people didn't know quite what had happened yet."

This wasn't Dykstra's first gem of the season. The Cal State-San Marco product allowed one hit over six frames in his season debut April 9 at Frederick. After posting a 4.89 ERA over 53 1/3 innings in nine Carolina League starts last season, he went back to the drawing board, adding a cutter to help him with Class A Advanced left-handed hitters, who owned a .322 average against him. And he credits the offering with his strong early returns this season.

"It's opening up more opportunities, especially to lefties. I used to struggle against them a little bit in the past because I didn't have anything that could really challenge them. Now I've got a pitch that runs in on their hands a little bit, and it just opens up so many other opportunities between that and my other pitches against lefties," he said.

Before the second game of Wednesday's doubleheader, Dykstra exchanged texts with his Major League brother, who congratulated him and told him to stick to his ground game. With a big leaguer in the family and a no-hitter figuratively on the mantle, each Dykstra brother could have bragging rights over the other. But they'd rather focus on the potential of a shared experience.

Congrats to my brother @James_Dykstra for throwing his first career no hitter! @WSDashBaseball #nono

"The ultimate goal for me is to get [to the Majors] as well," James said. "It'd be great to be there at the same time and especially on the same team, maybe. But this was such a big moment for him, especially with all the hard work I've seen him put in. Now I'm just trying to get there, too, and this is a good start."