Godfrey and Garcia combined for seven hits on Thursday 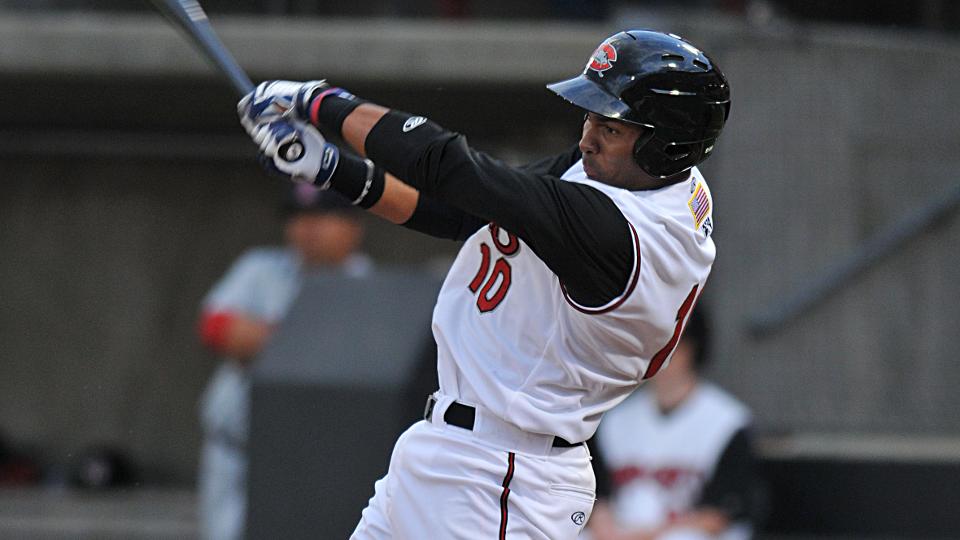 ZEBULON, NC - The Mudcats extended their winning streak to nine straight games with an 11-1 trouncing of the Hillcats at Five County Stadium on Thursday night. Carolina scored 10 runs on 13 hits over the first three innings en route to matching their second longest winning streak in franchise history.

Tyler Brosius started for the Mudcats (16-10) and picked up his second victory of the season after holding the Hiilcats (9-19) scoreless over six full innings. It was his second straight quality start and second straight shutout effort. Brosius (2-1, 3.33) allowed four hits, walked one and struck out four in the game.

Lynchburg's Michael Peoples (1-3, 9.00) allowed all 10 of the early Carolina runs. Peoples gave up 10 earned runs and 13 hits over three innings pitched. He also walked one and struck out two in the loss.

The nine game win streak is the longest for the Mudcats since their move to the Carolina League. The franchise record is 10 consecutive games and last occurred in 2005 when the Mudcats won every game played between April 18 and April 27. They also won nine straight games between April 12 and April 20 in 2003.

Carlos Franco drove in the first two runs of the game with a single to center in the first and brought in two more in the second with a home run to right. Franco was 2-for-4 with two runs, four RBI and two runs scored in the game.

Dustin Peterson was 3-for-5 with a run and one RBI. Joey Meneses was 1-for-4 in the game and has hit safely in seven straight games.

Andy Otero pitched the final three innings and earned the save. He allowed a run on three hits and struck out four. The lone Lynchburg run came in the eighth when Joe Sever and Clint Frazier both doubled against Otero. Frazier's was a ground rule double that brought in Sever.

Lynchburg used Antonio Romero, Robbie Alviles and Ben Heller out of the bullpen in the loss. Romero kept the Mudcats scoreless over two and 2/3 innings and struck out two. Aviles allowed a hit and blanked Carolina in the seventh. Heller pitched the eighth and allowed one run and two hits.

The Mudcats won all four games in the series and picked up their second straight sweep. They finished a sweep of the Frederick Keys on Monday night at Five County and finished the eight game home stand without a loss.

Next, the Mudcats begin an eight game road trip on Friday night in Salem at 7:05 p.m. LHP Yean Carlos Gil (0-4, 3.81) will start for Carolina in game one of their five game set in Salem. The Red Sox will send RHP Ty Buttrey (1-0, 5.40) to the mound for the series opener on Friday night.

All games air on the Mudcats Radio Network, The Big Dawg 98.5 FM, Rock City 99.3 and Sports 1490 AM. Games are also streamed online at www.carolinamudcats.com via TuneIn Radio and the TuneIn Radio app. TuneIn Radio is the official digital audio partner of MiLB.com.

Individual tickets are now available online at www.carolinamudcats.com, by calling (919) 269-2287 and by visiting the Five County Stadium box office.

The Carolina Mudcats are the Class A Advanced affiliate of the Atlanta Braves. The 2015 "Braves New World" season is the first for the Mudcats as an affiliate of the Atlanta Braves and their fourth straight in the historic Carolina League. First established in 1991, the Carolina Mudcats are in their 25th straight season of baseball at Five County Stadium in Zebulon, N.C. Fans can purchase tickets or find more information by calling (919) 269-2287 or by visiting www.carolinamudcats.com.