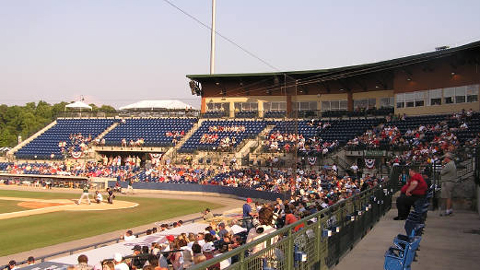 Charleston got the scoring started on back-to-back doubles by Ericson Leonora and Reymond Nunez in the top of the second inning to go up 1-0.

It stayed that way as both starters cruised until the top of the fifth inning when the RiverDogs added two more runs on RBI singles by Jake Cave and Greg Bird to make it a 3-0 game.

In the bottom of the fifth, Rome got on the board. With runners at second and third and two outs, Jose Peraza pulled a base hit through the left side to drive in a couple and cut the Charleston lead to 3-2.

In the top of the sixth inning the RiverDogs pushed their lead to 4-2 with a Jackson Valera liner that hit the pitcher Wes Parsons, trickled into shallow center, and brought home Reymond Nunez to score. Parsons had to leave the game with an injury after being struck in the leg with the liner one out into the top of the sixth.

The Braves were right back at it in the bottom of sixth matching the RiverDogs' run on Tyler Tewell's two out RBI single up the middle to score Edison Sanchez and make it a 4-3 game.

Charleston blew it open in the top of the seventh inning. After a walk to Angelo Gumbs with one out, Greg Bird launched a towering two-run homer to right and put the RiverDogs up 6-3.

Rome made it 6-4 Charleston with a run in the bottom of the seventh, but a costly error in the top of the ninth on shortstop Jose Peraza allowed two more runs to score for the Dogs and push their lead to 8-4. Vicente Campos threw two scoreless innings to close it out and collect his second save of the year for Charleston.

Greg Bird led the way offensively for the RiverDogs turning in a very impressive 2-3, single, homer, three RBI, two walk performance. He now leads the team with 18 homers and 74 RBI's. Reymond Nunez had a nice game as well going 3-5 with a couple doubles, a run scored, and an RBI.

Charleston's starter Evan Rutckyj allowed two runs on five hits in his five innings of work to earn the win and improve to 10-8. He became the first RiverDog to get to 10 wins this year, and just the fourth in the South Atlantic League in 2013 to achieve that feat.

James Pazos allowed a couple runs on a couple hits and a walk in his two innings of relief for Charleston.

Rome starter Wes Parsons got tagged with loss to fall to 5-7. The righty gave up four runs on eight hits in 5.1 innings.