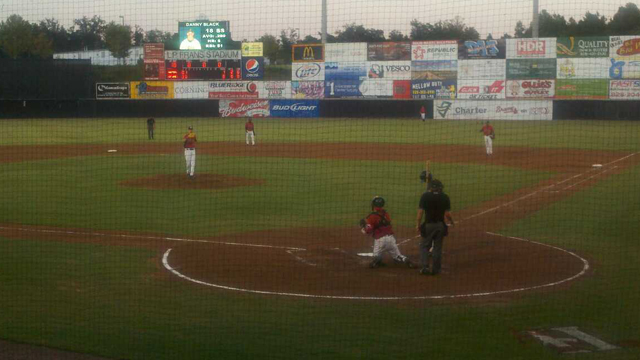 HICKORY, NC - The Charleston RiverDogs got out to a fast start and also rallied late in a back-and-forth game on Tuesday evening before the Hickory Crawdads scratched their way to an 8-7 walk-off win at L.P. Frans Stadium in South Atlantic League action.

The RiverDogs are 27-31 following their seventh loss in a row. The Crawdads have a 30-27 record and can sweep the RiverDogs in Wednesday's series finale. Eduardo de Oleo homered in the game and is now tied with Mike Ford and Aaron Judge for a team-best eight homers.

Charleston scored in each of the first three innings to get in front. In the first, Aaron Judge doubled against Chad Bell to score Michael O'Neill and give the RiverDogs a 1-0 lead. de Oleo hit a solo blast in the top of the second that bounced over the left field wall. After Hickory answered with a solo home run from Ryan Cordell in its half of the second, Charleston's Jackson Valera increased the lead to 3-1 in the third with a sacrifice fly that brought in Tyler Wade.

Hickory tied the game at 3-3 in the bottom of the third inning with another home run. Evan Van Hoosier reached on a one-out single off Rookie Davis, and Nick Vickerson followed with a game-tying drive to left field.

During the fifth inning, the Crawdads grabbed a 7-3 lead in a four-run frame. Charleston's Omar Luis replaced Davis with one out and two runners aboard. Luis came in against former Citadel Bulldog Joe Jackson, who doubled to drive in Van Hoosier and put Hickory ahead. Nomar Mazara was the next batter and blasted a three-run home run to right field.

The RiverDogs had an immediate answer, cutting the difference to 7-5 in the sixth. John Murphy and O'Neill each reached with two outs and stole bases to get into scoring position. Wade singled off Kevin Pucetas to plate both runners and keep the game close.

Charleston continued its comeback in the top of the eighth and evened the score at 7-7. Wade faced Josh McElwee with one out and runners on the corners when he singled and drove in de Oleo to put the RiverDogs within one. Charleston loaded the bases for Mike Ford, whose groundout against Cody Kendall allowed O'Neill to score the tying run.

The RiverDogs were scoreless in the top of the ninth before the Crawdads had a chance to win in the bottom of the frame. Hickory faced Eric Ruth, who struck out the side in the seventh and also kept the Crawdads scoreless in the eighth. Jackson legged out a double with one out that got the potential winning run on base. Mazara was intentionally walked and Cordell drew another walk that loaded the bases. Lewis Brinson won the game on a sacrifice fly that scored Jackson.

Kendall is 4-2 as the winning pitcher for Hickory. Ruth is 0-1 with a loss in his RiverDogs debut.

COMING UP: The finale of this three-game road series will be played at 11am on Wednesday morning, featuring RiverDogs RHP Luis Severino (1-1, 2.68 ERA) matching up with Crawdads RHP Akeem Bostick (2-3, 4.86 ERA). This quick road trip will be followed with a four-game RiverDogs homestand against the Savannah Sand Gnats, starting on June 5 with another Budweiser Thirsty Thursday, presented by 95SX. This includes $1 drafts and entertainment from DJ Natty Heavy in the Ashley View Pub, along with a wing-eating contest from Wild Wing Café. Tickets may be purchased at the Riley Park Box Office, (843) 577-DOGS (3647) or on-line at www.riverdogs.com. If fans cannot make it to the ballpark, they are encouraged to tune in to all the action this year both home and away worldwide on www.riverdogs.com and locally on 1250 WTMA, the new radio home for RiverDogs baseball.