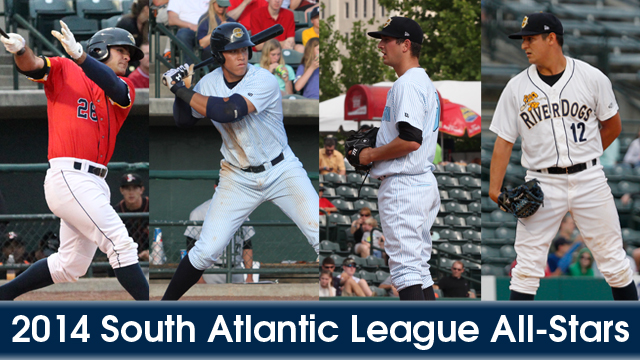 CHARLESTON, SC - The South Atlantic League has announced the rosters for the 55th Annual SAL All-Star Game, and four Charleston RiverDogs have been tabbed to represent the Southern Division for this year's All-Star Game on June 17 at L.P. Frans Stadium in Hickory, NC.

Ford will be the Southern Division's starting first baseman in the same ballpark that he made RiverDogs history in last month. Ford hit the first four-homer game in Charleston professional baseball history during a 17-10 triumph at the Hickory Crawdads on May 25. The 2013 free agent signee from Princeton has a team-high eight home runs, and he also leads the RiverDogs with an eight-game hit streak and a 15-game on-base streak, both from earlier this season.

Judge, the starting right fielder for the Southern Division, is in the midst of a successful professional debut with the RiverDogs. He has joined Ford with a team-best eight homers and also leads Charleston with a .321 average, 10 doubles, 31 walks, 35 runs batted in, a .416 on-base percentage, and a .515 slugging percentage. Judge, who was the 32nd overall pick in the first round last year out of Fresno State, has also homered in each of his last three games.

Lail co-leads the South Atlantic League with seven wins as he is tabbed to join the Southern Division pitching corps. Most of Lail's victories came in a six-game win streak, the best mark for consecutive winning starts by a RiverDogs pitcher since Charleston became a New York Yankees affiliate in 2005. Lail, who is also fourth in the Sally League with 60 strikeouts, was drafted in 2012 in the 18th round out of Bingham (Utah) High School.

Smith joins Lail on the Southern Division squad after an impressive streak of his own. Smith compiled 23.1 consecutive scoreless innings early this season, placing sixth among the best RiverDogs streaks in the past decade. He also recorded a 13-strikeout performance at Delmarva on April 24, setting the mark for the most single-game strikeouts in Minor League Baseball this year. Smith was drafted in the 14th round of the 2013 Draft from Sam Houston State.

This year's All-Stars were chosen through voting by managers, coaches, local media, front office executives, and fans. The Savannah Sand Gnats led the league with seven player selections in the Southern Division. In the Northern Division, the Greensboro Grasshoppers and the Hagerstown Suns each send six players to Hickory. First pitch of the 55th Annual South Atlantic League All-Star Game is scheduled for 7pm on June 17 at L.P. Frans Stadium in Hickory, NC.