It's Déjà Vu All Over Again! Dogs Walk off 'Flies to Clinch Series 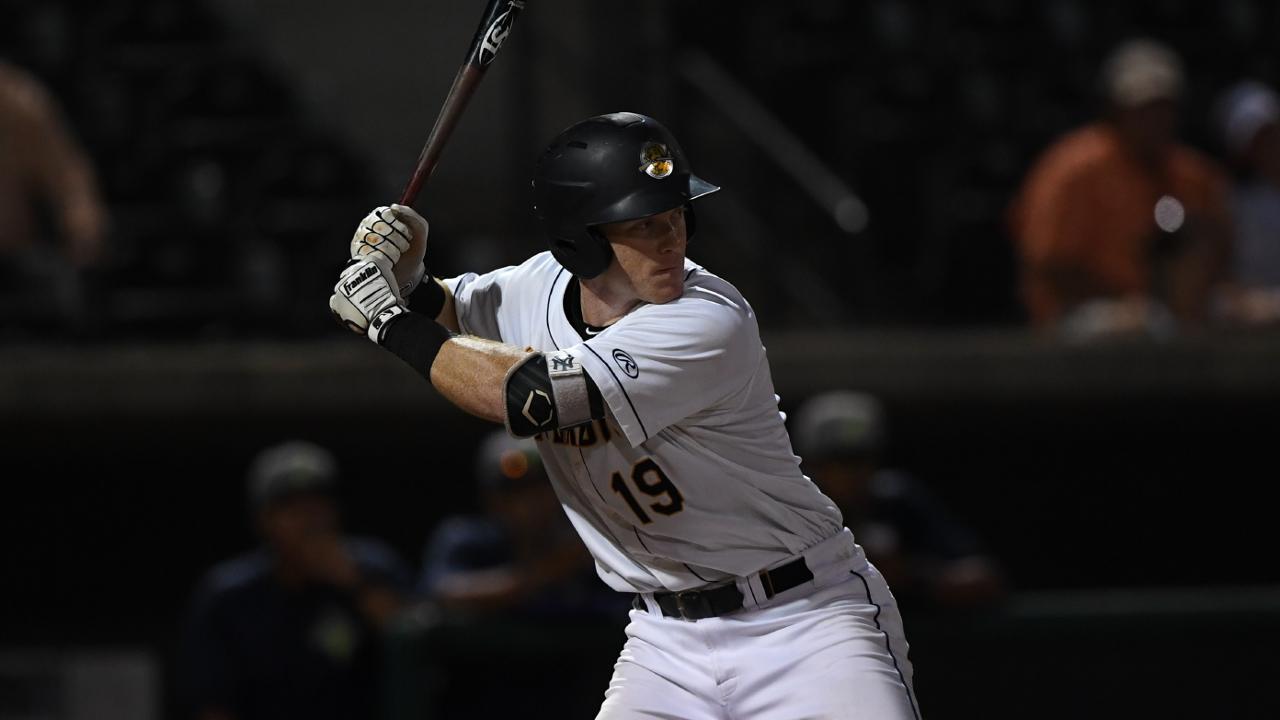 Eric Wagaman crushed a one-out double in the bottom of the ninth to lift the RiverDogs over the Fireflies 1-0 Tuesday night. (Michael Wiser Photography)

CHARLESTON, S.C. - The resilient RiverDogs scratched and clawed all night long, hanging in a grueling pitchers' duel before Eric Wagaman lined a walk-off double in the bottom of the ninth inning to give Charleston a 1-0 win over the Fireflies Tuesday night in front of 3,213.

Josh Stowers, the hero from Monday night's walk-off win, received a break from playing the field and served as the DH in game two. He caught the Fireflies (47-70, 23-28) defense by surprise with one away in the bottom of the ninth, putting an excellent bunt down the third base line on the first pitch of his at-bat against Willy Taveras (5-11, 5.21), and the throw to first by Shervyen Newtown was much too late to get the speedy Stowers.

Columbia called for a mound visit before Wagaman stepped to the plate, and on the 2-1 pitch, Wagaman crushed a frozen rope out to right-center field, giving the Dogs (63-58, 26-25) their second consecutive walk-off win, and their 10th of the last 12 contests.

The ninth-inning tally was the only marker of the contest, as both pitching staffs were dominant once again. Yankees No. 21 overall prospect Luis Medina, entering Tuesday with a 2.57 ERA over his last five outings, continued his torrid stretch from beginning to end. He began his night fanning leadoff hitter Walter Rasquin as part of a perfect first frame. His toughest inning came in the second, when Brian Sharp reached on a walk and Chandler Avant doubled to left field with two outs. Medina clamped down even harder, inducing a sharp groundout back to the mound off the bat of Phil Capra to escape the threat.

The righty sailed through the next five frames, at one point setting down 13 opposing hitters in a row before a leadoff single by Jose Medina in the seventh. The Dominican Republic native remained unfazed, striking out two of the final three to end seven shutout innings.

The outing marked a career-high in innings pitched, and recorded his third 10-strikeout game of the year, a career-high. He also entered Tuesday night's action leading the league with 66 walks allowed, but the free pass to Sharp was the sole walk Medina issued, marking the fourth of his 20 starts this season in which he allowed one or fewer walks.

Wagaman's two-bagger was his first hit of the night, and snapped an 0-for-11 skid. His last knock came in the top of the eighth inning on the road in Hickory, when the first baseman crushed a game-winning two-run shot to lift the Dogs to a 10-9 win.

Daniel Ramos (1-0, 0.00), in his second stint with the Dogs after appearing in 24 games last year, came on in the eighth to relieve Medina. The righty fired two innings of one-hit ball to seal the shutout.

With the start of the next school year right around the corner, the RiverDogs made sure that local teachers felt loved and appreciated at the Joe as part of Teacher night at Riley Park. Ahead of another year of hard work with the kids, teachers who came out to the game received $5 tickets at the box office with a valid ID, and enjoyed $1 beer and $3 wine selections in Murray's Mezzanine. The RiverDogs also hosted the second blood drive of the season in partnership with The Blood Connection. Many fans got to the park early and donated blood outside the stadium gates to help those in need. To top off the festivities at the Joe, it was another Food Lion Live & Local Tuesday, and fans walked through the concourse and enjoyed the farmers' market set up along the walkways at the Joe.

Charleston wraps up its abbreviated homestand with the series finale against Columbia Wednesday evening. Right-hander Roansy Contreras (8-5, 3.77) will make his fourth start of the season against the Dogs' in-state rivals, having allowed six total runs in 18 innings to the Fireflies this year. Columbia will task fellow righty Christian James (3-8, 4.58) with the starting assignment opposite Contreras, and the Florida native will be making his third start against Charleston this season. First pitch is scheduled for 7:05 p.m.

For those who can't make it to Riley Park, catch the game on WTMA 1250 AM in the tri-county area, online streaming on the TuneIn Radio app and on MiLB.tv with a subscription. Fans can "Make Fun" with the RiverDogs all season long down at The Joe. Single-game tickets, including options to the Riley Park Club, are available at riverdogs.com/tickets or by contacting the RiverDogs front office at 843-577-3647 (DOGS). A full schedule and list of game times for the 2019 season are available at riverdogs.com.