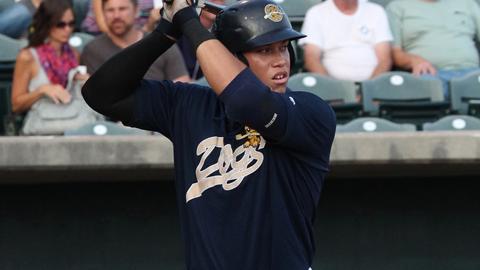 CHARLESTON, SC - An early Charleston RiverDogs lead was wiped away by a six-run rally that helped the Asheville Tourists to a 7-5 victory and a series sweep on Sunday in front of 4,326 fans at Joseph P. Riley, Jr. Park in South Atlantic League action. Aaron Judge hit his seventh home run for the RiverDogs and also tripled while scoring two of Charleston's runs.

Charleston drops to 27-29 after its fifth straight loss. Asheville is 32-23 following a four-game sweep at Riley Park.

Following three scoreless innings, the Tourists took a 1-0 lead in the top of the fourth. Raimel Tapia opened the frame with a single. Ryan McMahon was hit by a pitch, and a pair of fly outs set up runners on the corners. McMahon started for second base while Tapia got a great jump for the plate. Tapia slid home on a stolen base for Asheville's first run.

The RiverDogs moved in front with a two-run spurt at the end of the fourth. Judge led off with a triple and tied the game by scoring on Miguel Andujar's single. With the bases loaded and two outs, Brandon Thomas bounced an infield single that allowed Andujar to score the go-ahead run and put Charleston up 2-1.

Asheville scored six runs in the fifth and took the lead for good. Wilfredo Rodriguez tied the contest with a one-out single that brought in Emerson Jimenez. Correlle Prime's two-out, two-run double broke the tie to give the Tourists a 4-2 advantage. Jose Briceno added his own double to score two more runs. Briceno closed the scoring later in the frame when he stole third base and went home due to a throwing error on the play for a 7-2 Asheville lead.

Judge went deep to trim the deficit to 7-3 during the bottom of the fifth. On a 2-1 pitch, Judge lifted a home run over the batter's eye in the center field. It was Judge's seventh blast of his professional career, all against right-handed pitchers as a member of the RiverDogs.

In the last of the ninth, Charleston attempted a comeback that brought the potential tying run to the plate. Dustin Fowler singled and would score from second base on a double by Gosuke Katoh. Tyler Wade drove in Katoh with a two-out single that pulled the RiverDogs within 7-5. With Judge in the on-deck circle, Asheville's Troy Neiman induced a game-ending groundout.

Antonio Senzatela earned the win for Asheville, climbing to 6-1 with only three runs allowed in five innings pitched. Charleston's Caleb Smith was tagged with the loss and is 4-4 after giving up six runs in 4.2 innings. Neiman claimed his third save in as many opportunities this season.

BALLPARK FUN: The homestand finale was preceded by the annual Bark for Your Brew event with fans enjoying a sampling of several craft beers alongside their dogs, which stayed for the game on Dog Day. Denny McLain, the last Major League pitcher to win at least 30 games in a season, was signing autographs and chatting with fans during Sunday's game. The Fire Circus performed on-field routines with flaming torches and hula hoops on Luau Night at The Joe.

COMING UP: Charleston starts a three-game road series at Hickory on Monday at 7pm. RiverDogs RHP Brady Lail (7-1, 3.19 ERA) will pitch against Crawdads RHP Cole Wiper (3-6, 4.15 ERA). Riley Park will host a four-game homestand against the Savannah Sand Gnats after the quick road trip, starting on June 5 with another Budweiser Thirsty Thursday, presented by 95SX. This includes $1 drafts and DJ Natty Heavy in the Ashley View Pub, along with a wing-eating contest from Wild Wing Café. Tickets may be purchased at the Riley Park Box Office, (843) 577-DOGS (3647) or on-line at www.riverdogs.com. If fans cannot make it to the ballpark, they are encouraged to tune in to all the action this year both home and away worldwide on www.riverdogs.com and locally on 1250 WTMA, the new radio home for RiverDogs baseball.