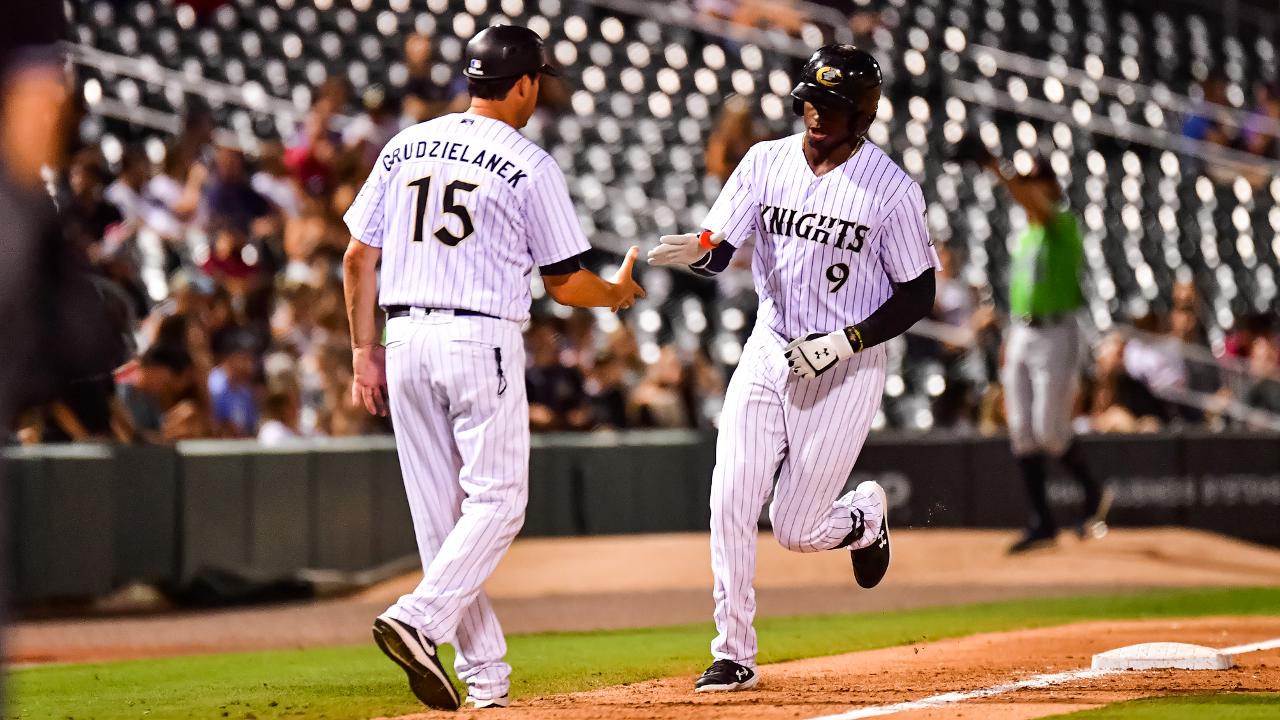 (UPTOWN CHARLOTTE, NC) - Behind a dominant debut from one of baseball's brightest prospects, the Charlotte Knights defeated the Gwinnett Stripers 15-12 in a wild slugfest on Thursday night at BB&T Ballpark in the opener of their four-game series.

Making his Triple-A debut, Knights outfielder Luis Robert went 3-for-5 with two home runs, including a grand slam, and a career-high seven RBI to lead the Knights to a win in their first game after the All-Star break.

Down 2-1 in the second, Robert tied the game for Charlotte with a sacrifice fly to right before Danny Mendick came home on a wild pitch to put Charlotte in front.

An inning later, Alcides Escobar singled to center with the bases loaded to plate a pair of runs. Later in the inning, Robert unloaded for his first Triple-A hit, a grand slam 409 feet into the left field stands to give the Knights a 9-2 lead after three innings.

However, the Stripers scored five runs over the next two innings to trim their deficit to 9-7. In the bottom of that inning, the Knights got the run back. Mendick reached with a one-out single. The next hitter, Trey Michalczewski, laced a two-run homer into the right-field corner, his second with the Knights, to put Charlotte ahead 11-7. Not to be outdone, Robert followed with a 428-foot blast to left for his second home run of the night to give the Knights back-to-back home runs and a 12-7 lead after five innings.

Gwinnett wouldn't go quietly, as four runs in the top of the sixth cut the Charlotte advantage to 12-11. But the Knights would pull ahead again as Matt Skole scored on an error. Escobar then plated Adam Engel with an RBI ground out, and Robert capped Charlotte's scoring with a sharp RBI single to center.

Offensively, Robert's incredible night at the plate set the stage while Mendick went 4-for-5 with three runs scored in the win. Yermín Mercedes also went 2-for-4 with three runs and Escobar recorded three RBI for the Knights.

On the mound, Matt Foster (W, 4-1) earned the win with a scoreless eighth inning. Starter Donny Roach gave up seven earned runs on 12 hits with one walk and two strikeouts over 4.1 innings.

The Knights and Stripers continue their series on Friday night. Justin Nicolino (6-3, 4.48) is scheduled to start for the Knights. Pregame coverage of the 7:04 p.m. game is set for 6:50 p.m. on 730 The Game ESPN Charlotte. The "Voice of the Charlotte Knights" Matt Swierad and long-time Knights radio broadcaster Mike Pacheco will have the call for all of the action.