Taylor strikes out eight in relief 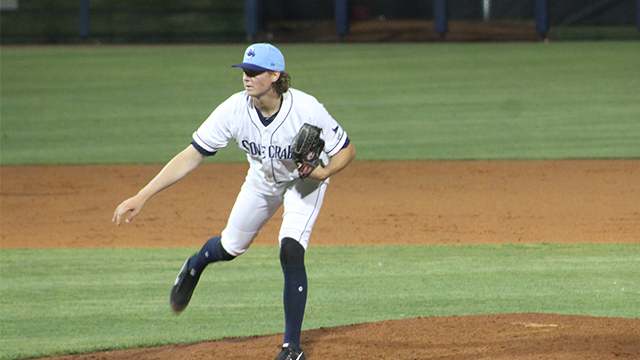 PORT CHARLOTTE, Fla. (May 7, 2018) - Seven Charlotte Stone Crabs hitters recorded hits Monday, six of which went for extra bases in a 7-5 win over the Fort Myers Miracle at Hammond Stadium.

Charlotte (16-15) reliever Curtis Taylor struck out eight batters over three innings of relief to earn the save, tying the Stone Crabs' season high for strikeouts in a game.

The win brings the Stone Crabs above five-hundred for the first time since April 22, matching their high mark for the season.

The Stone Crabs scored in five different innings, getting out in front on a Jesus Sanchez double in the first.

With the game tied at one in the top of the second, Tristan Gray doubled to right to lead off the inning. After the next two batters were retired, Lucius Fox delivered a run-scoring double to left to give Charlotte a 2-1 lead.

In the top of the third, Gray and Nate Lowe both pulled solo homers to right to extend the Stone Crabs' lead to 4-1.

After a Lewin Diaz two-run homer made it 4-3 in the sixth, David Olmedo-Barrera doubled to left to start the top of the seventh. Two batters later, Miles Mastrobuoni drove him in with a single to right to make the score 5-3. Later in the inning, Sanchez also drove in a run with a single to stretch the Charlotte lead back to three.

Stone Crabs reliever Mikey York (4-2) went 4.1 innings to earn the win, allowing two earned runs on five hits while fanning three. Taylor inherited a bases-loaded, nobody out jam from York in the seventh, and escaped with only one run scoring.