Charlotte takes game one 1-0, plays to 2-2 tie with Daytona in game two 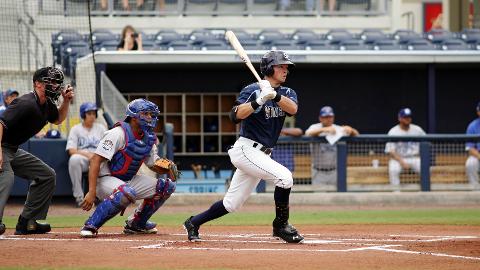 PORT CHARLOTTE-- No need to adjust your computers, you read the headline and subheader to this article correctly. After 22 innings of baseball were played in two gamesat Charlotte Sports Park Saturday night, there was one game with a winner, and the other with, well, no winner. Charlotte took the completion of Friday night's suspended game against the Daytona Cubs 1-0 in 13 innings, while the two teams played to a 2-2 tie in game two.

Due to league policy and the current schedule outlook, game two was called after the 15th inning with the score tied at two. The Florida State League has a league curfew in which no inning can begin after 12:50 a.m. Once the final out was recorded in the 15th inning, the clock read 12:56 a.m., and the game was called.

An odd combination of unfortunate weather, scheduling conflicts and a curfew rule contributed to the tie. The Cubs were oringally scheduled to play a four game set with the Stone Crabs, but due to Thursday night's rainout and Friday's suspended game, a decision was made to play just one regulation game Saturday night after the completion of Friday's suspended game. That meant one game of the series was outright cancelled.

Since it was the last scheduled game between the Cubs and the Stone Crabs in the regular season, and one game had already been outright cancelled, the game was not suspended, and instead called as a tie.

That matched 7.1 innings of scoreless relief from Jacob Partridge and Sean Bierman for Charlotte after Roberto Gomez exited the game with two outs in the eighth inning in a tied ballgame.

A solo home run from Daytona's Taylor Davis tied things up at 2-2 in the eight inning off Gomez, and represented the final run of the ballgame.

This all followed a 13 inning conclusion to Friday night's suspended ballgame. The game resumed Saturday with a 0-0 score in the top of the seventh, with both teams exchanging zeroes until the 13th inning. With two outs, Kes Carter drove Jake Hager home off Frank Del Valle on the first pitch to win it. This came after Richie Shaffer was intentionally walked to bring Carter to the plate.

Friday's suspended game featured stunning pitching performances for Felipe Rivero and Ivan Pineyro, each of whom worked six scoreless innings. Charlotte's bullpen in game one (Matt Ramsey, Shay Crawford, and Lenny Linsky) combined for seven scoreless innings of relief, with Linksy earning his fifth win thanks to the Carter walk-off.

Overall, 22 innings of baseball were played at Charlotte Sports Park spanning over seven hours and 25 minutes.

The Stone Crabs will now welcome in the Dunedin Blue Jays for a four game set starting Sunday. First pitch in Port Charlotte is scheduled for 5:30 p.m.