A Summer of All Stars and Call-Ups, and an Abbreviated Season 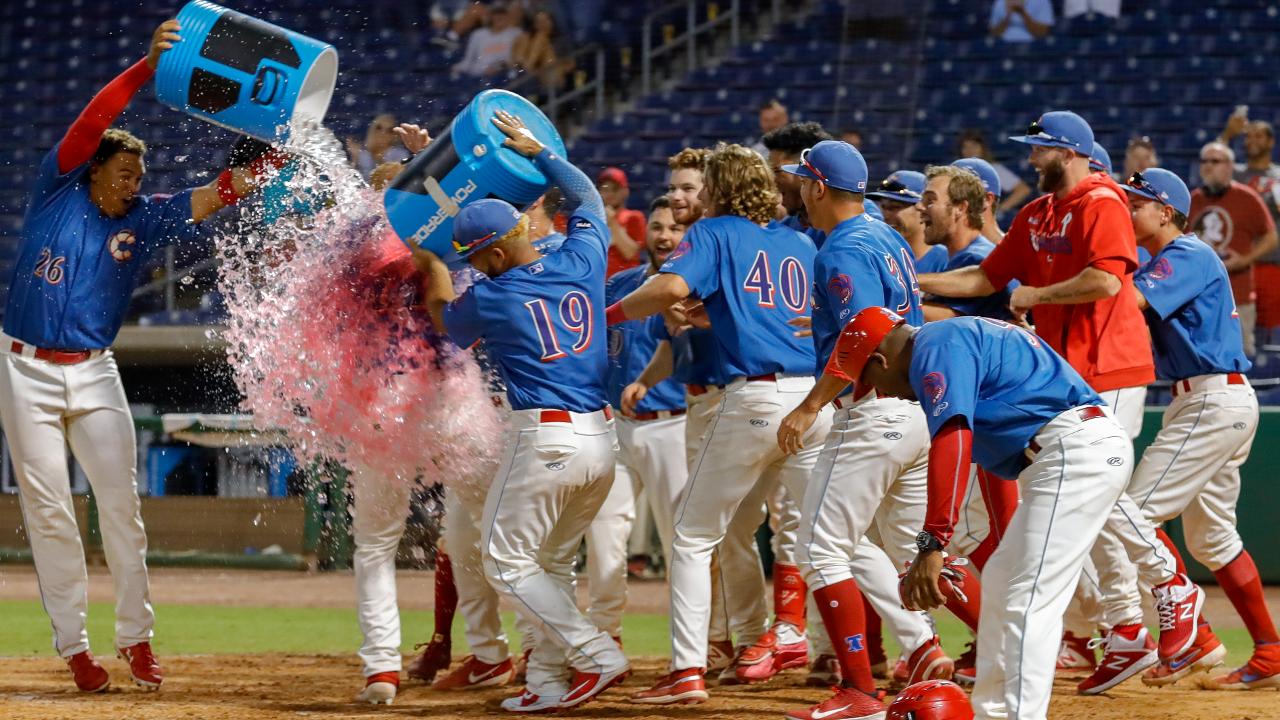 Threshers walk-off on June 4 vs the Hammerheads

CLEARWATER, Fla. - The 2019 season came to a screeching halt for the Clearwater Threshers.

Still in the running for the playoffs, the Threshers were hot; going into the final home game of the season on a three-game win streak over the Lakeland Flying Tigers. However, Hurricane Dorian was projected to make landfall on the east coast of Florida during early September, and the Florida State League made the decision to cancel the remainder of the regular season as well as the playoffs on August 29.

That night, what would now be the final game of the campaign, Clearwater completed a four-game sweep over the Lakeland Flying Tigers to end the year on a high-note, one game ahead of the Daytona Tortugas for what would have been the Wild Card spot. The team finished the season with an overall record of 68-68 under the leadership of Marty Malloy in his first year at the helm.

The club finished first in the league in attendance with 180,069 patrons throughout the season, and hosted nine of the Philadelphia Phillies top 30 prospects during the 2019 campaign.

Grant Dyer, Jonathan Hennigan, and Damon Jones represented Clearwater on the mound at the break. However, Hennigan and Jones were promoted to Double-A Reading prior to the mid-season classic at Roger Dean Chevrolet Stadium in Jupiter. Alec Bohm, Nick Maton, Simon Muzziotti, and Matt Vierling rounded out the team in the field.

Bohm held a .313 average with 22 RBI in just 37 games prior to the All Star contest on June 15. During his stint in Clearwater, the Phillies number one prospect boasted a .329 average with a .902 on-base percentage. The former first round pick was promoted to Double-A shortly after the All Star break.

Muzziotti was also named to the end of the year All Star team after the 20-year-old cracked the top 10 in the league for batting average (.287) and hits (121). The Maturín, Venezuela, native had the most multi-hit performances amongst his Threshers teammates with 31.

Keylan Killgore took one of two reliever spots on the end of the year roster. The Wichita State product recorded the most saves in the FSL for the 2019 season with 11 and finished the season with a 3.57 ERA in 53 innings pitched, all in relief, maintaining a 1.34 WHIP.

Julian Garcia, Spencer Howard, Alejandro Requena, and Damon Jones highlighted an impressive group of starters for Clearwater in the first half. The staff held hitters to just a .245 overall average, putting them at the number five spot in the FSL prior to the All Star break.

Howard, the Phillies fourth ranked prospect, missed almost two months of the season due to an injury, but the time away didn't slow down the 23-year-old. The righty totaled a 1.29 ERA and a 0.69 WHIP in his seven starts with the Threshers. Returning from the Injured List on July 8, Howard did not allow a run and scattered three hits over three starts before being promoted to Reading on July 26.

Requena's nine wins gave him the fifth most in the FSL and a .470 win percentage. Acquired from the Colorado Rockies in the Pat Neshek trade in 2017, the native of Venezuela struck out 105 batters over 112 innings.

The second half brought some new, young, arms to Clearwater in Kyle Glogoski, Ethan Lindow, James McArthur, and Jack Perkins.

A 20-year-old New Zealand native, Kyle Glogoski impressed in his first start on June 22, pitching five scoreless innings as the Threshers recorded their first nine-inning no-hitter since 2016. Glogoski allowed just two walks while striking out five in his FSL debut. His performance was backed up with three frames and four strikeouts by Tyler Carr, and a perfect ninth by Killgore. The 5-0 win solidified Clearwater's strong start to the second half, winning five of the first six games.

As a whole, Threshers pitching staff combined for a 3.37 ERA and a 1.25 WHIP. Their 1,180 strikeouts on the season finished third in the league.

Outfielder Jhailyn Ortiz topped the team in home runs (19), runs (57) and RBI (65). The Phillies 12th overall prospect continued to demonstrate his power by mashing his first career grand slam on June 20, finishing the season with a .653 OPS and .381 slugging percentage.

Three 2019 Threshers: Bohm, Howard, and Nick Maton, will be playing for the Scottsdale Scorpions of the Arizona Fall League. The league, composed of top prospects from all levels of Minor League baseball, begins play September 18. Threshers pitching coach Brad Bergesen joins the group in Scottsdale as the team's pitching coach.