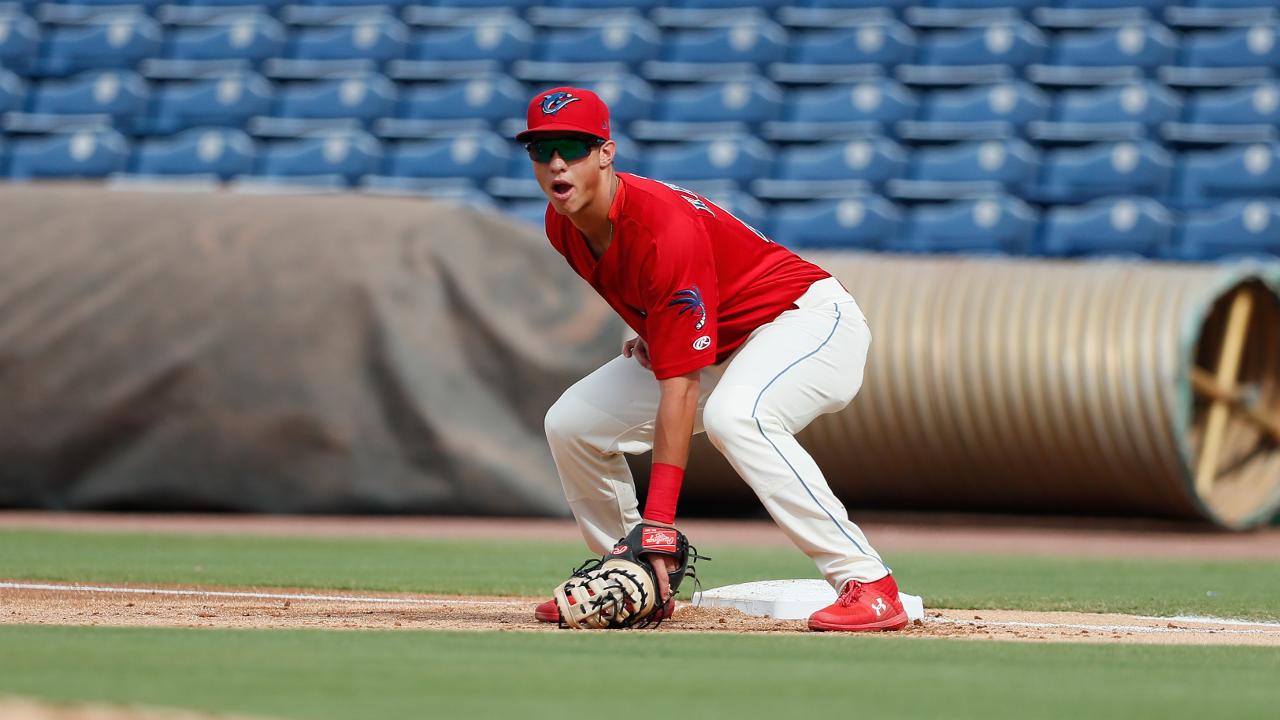 Clearwater Threshers in game 1 of a double header against the Bradenton Marauders at Spectrum Field in Clearwater Florida July 23 2019. (Nathan Ray)

JUPITER, Fla. - The Clearwater Threshers started their four-game series against the Palm Beach Cardinals with a doubleheader split on Friday at Roger Dean Chevrolet Stadium. With the 5-3 win and 3-0 loss, Clearwater fell just shy of earning its first sweep in a twin bill in 2019.

Clearwater (59-58, 23-28) used a trio of triples to its advantage in the opener, as all five runs for the visitors came across with the three-base hits.

With two down in the third inning, Simon Muzziotti plugged the gap in left center with the first three-bagger of the game. After a walk to Matt Vierling, Jhailyn Ortiz brought the runners home with a triple for the 2-0 advantage.

After Palm Beach (52-61, 17-32) slugged back-to-back home runs against James McArthur to start out the bottom half of the frame to knot the score at two apiece, the road team used the triple to its advantage in the top of the fourth.

Rafael Marchan smacked a single to center to get things started, and moved up to third on Daniel Brito's double. After Luke Miller grounded out, Dalton Guthrie was intentionally walked to load the bases.

Matt Kroon cleared the bags with a triple out to right field and give the Threshers the 5-2 lead.

Gustavo Armas (2-1) gave up a solo long ball to St. Louis Cardinals' top-prospect (MLB.com) Nolan Gorman in the fifth (his second of the game), but did not allow the home team to creep any closer in his two innings of relief.

Game two played out tighter than game one, as the Cardinals struck against Seth McGarry (1-1) with a two-out rally in the second.

The right-hander walked Michael Perri to keep the inning alive, then surrendered a double to Nick Plummer to fall into a 1-0 deficit.

Clearwater's offense had chances against Alvaro Seijas in the fourth and sixth frames, but came up empty.

With runners at the corners and one out in the fourth, Madison Stokes grounded into an inning-ending twin killing.

The Threshers' biggest chance to push across a run came in the sixth when Muzziotti started the frame with a hustle double. The runner advanced to third with a bunt single from Kroon to put men on the corners with nobody out.

Jhailyn Ortiz went down swinging for the first out, but Vierling drew a free pass to load the bases for Stokes. The product of South Carolina chased a ball in the dirt for a third strike for the second out, and Guthrie bounced out to short to strand the maximum.

Kyle Arjona gave up a two-run single in the bottom of the sixth to break the game open for the home team, leading to the final tally.

Kroon finished the day with three hits, and reached base four times. The Oklahoma State product stole three bags in the nightcap, setting a team-high for the 2019 season.

Clearwater looks to take the advantage in the four-game series in game three on Saturday night at Roger Dean Chevrolet Stadium. RHP Kyle Glogoski (1-1, 2.08) gets the call for the Threshers against the Cardinals' RHP Griffin Roberts (1-6, 5.57). First pitch for game one is scheduled for 5:30 p.m., with coverage beginning at 5:15 p.m. starting with Threshers Live! The Pregame Show on threshersbaseball.com.