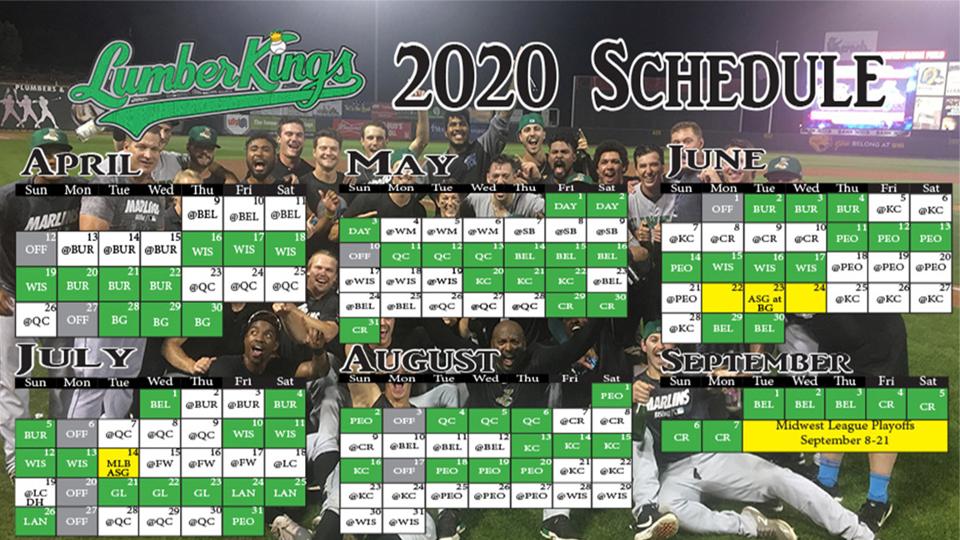 CLINTON, IA (October 3, 2019) - The Clinton LumberKings, Midwest League affiliate of the Miami Marlins, will open the 2020 season - their 65th in the league - as the defending Western Division Champions. Over a 70-home game schedule, the LumberKings take the field for 10 Saturdays, two holidays, and several rivalry matchups.

After falling three wins shy of a Midwest League title in 2019, Clinton returns to action at NelsonCorp Field for the first time in 2020 on Thursday, April 16th against the Wisconsin Timber Rattlers - beginning a seven-game homestand.

The season will feature earlier Saturday start times. Starting on April 18th and running through September 5th, the LumberKings will start all 10 Saturday home games at 5 pm - with the exception of a 6:30 pm start time for the 4th of July.

The LumberKings will play host for holiday matchups on Saturday, July 4th against the Burlington Bees - and Labor Day - Monday, September 7th against the Kernels to conclude the regular season.

For up-to-date information on the Clinton LumberKings 2020 promotional schedule stay tuned to lumberkings.com and twitter via @LumberKings.

The Clinton LumberKings, the only remaining Charter Member of the Midwest League, are preparing for their 65th season in the league and their second year of affiliation with the Miami Marlins. They play their home games at NelsonCorp Field a park that has been home for the Clinton franchise since 1937. Since the club's inception, 285 former Clinton players have gone on to reach the Major Leagues. Advertising and tickets for the 2020 season are available by calling (563)242-0727 or by visiting LumberKings.com