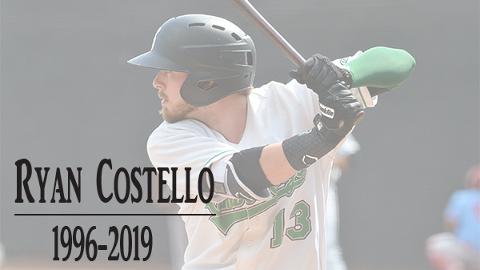 Ryan Costello was found dead at the age of 23 while playing in the Australian Baseball League.

CLINTON, IA (November 19, 2019) - It was just a few months ago, the Clinton LumberKings were pushing for a playoff spot in the first half and slugging first basemen Ryan Costello was leading the way. Over less then a year in Clinton, the Connecticut native became one of the most beloved figures for baseball fans in the small Iowa town that learned early Monday morning of his passing at the age of 23 while playing for the Auckland Tuatara of the Australian Baseball League.

Known for a light hearted and approachable demeanor, Costello was assigned to Clinton for Opening Day in 2018 and quickly endeared himself to fans, coaches, and staff. His humorous nature was balanced by a serious side that made him a clubhouse presence and rising prospect.

Costello's path to baseball prospect was an unlikely one. A native of Weathersfield, Connecticut he stayed close to home and went to Central Connecticut State University, a 20-minute drive, to play baseball. The school has not been known as a baseball power and Ryan was attempting to become just the fourth player in school history to go on to play in the Major Leagues. He played for three years with the Blue Devils with his last season, junior year, being his best.

Over his final year of college baseball, Costello tied a school record for doubles in a single season (22) in addition to hitting a league leading nine home runs. The campaign earned Major League attention and led to the Seattle Mariners selecting him in the 31st round of the 2017 MLB Draft.

As a player, it was the power that most fans in Clinton will most remember. He hit the two most dramatic home runs of the year in the final game of the first half to briefly keep the LumberKings playoff hopes alive. On June 17th in Beloit, in a must win game against the Snappers, Costello hit a game-tying home run in the eighth inning and then a game-winning three-run blast in the ninth. He ended his time in Clinton leading the Midwest League in home runs (16), extra base hits (42), and RBIs (70).

Costello was one of four LumberKings to be named to the Midwest League All-Star Game and also appeared in the home run derby in Lansing. Years later, the pride of Ryan's family left impressions on LumberKings staff. Family was one of his great motivators and a wish was always to spend more time with them. He mentioned how "the first thing we do when I go home is go fishing with my dad."

Ryan was one of my favorite guys I've got to know and watch play in Clinton. A great player and a fun, outgoing person. Seeing how excited his family was at the All-Star game was amazing to see. He was one of those guys you really root for after they move on. https://t.co/S6vwgyoiuh

So sorry and shocked to hear of @RCos13 passing while in the ABL. In his less than 1 year in Clinton we all got to know the fun, outgoing, and passionate player that his teammates and family knew. I'll never forget meeting his family for the ASG & how proud they were. RIP Ryan

Whenever asked about his strengths, Costello would typically cite his ability to stay positive that came from an understanding for the game's daily grind. This translated into fan access that made many Ryan Costello fans in Clinton even after his time had come to an end following his trade to the Minnesota Twins on July 30th, 2018.

I'm in total shock this AM to hear of the passing of former @LumberKings @RCos13 gone way to soon RIP Ryan. My prayers and thoughts go out to his family and his teammates.

Months after his trade to the Twins he was assigned to the Fort Myers Miracles and was part of a playoff run that culminated in a Florida State League Championship. His home run in Game Four was the decisive blow in the team's seventh league title.

Teammates and teams from Ryan's brief professional career took to twitter to express their sadness at the loss.

One of my favorite teammates. Prayers out to his family. https://t.co/wilbX0aLjh

One of the best teammates I have ever played with and a great friend. Rest east Cozzy we'll all miss you brother. https://t.co/o1xyXV4Vs8

I'll miss you, Cozzy. You touched so many lives in such a positive way. Thanks for always being there for me. A true friend who could always make anyone laugh. Love you kid. https://t.co/fECRnUuVjE

Costello rose as high as the Double-A level and over three seasons in professional baseball he played for the Pensacola Blue Wahoos, Fort Myers Miracles, Clinton LumberKings, Arizona League Mariners, and Auckland Tuatara.

A GoFundMe page has been established by former Blue Wahoos teammate Mark Contreras to help pay for the costs of transporting Costello's body back to the U.S. and for funeral arrangements in his hometown.