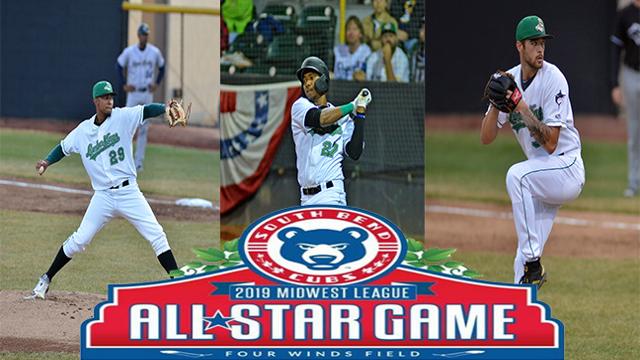 Encarnacion, 21, has been among the league leaders in most major offensive categories since arriving in Clinton as part of the Opening Day Roster. At the time of being named an All-Star, he was ranked second in the league in hits (64), fourth in total bases (100) and RBI (39), and seventh in batting average (.314). In addition to being a force in the middle of the LumberKings order, Encarnacion has been the everyday right fielder starting in 54 of the LumberKings 55 games.

Vallimont, 22, has formed a potent one-two punch with fellow all-star Humberto Mejia atop the LumberKings starting rotation. Since being named the team's Opening Day starter he has gone 3-4 with a 2.95 ERA over 11 starts. Vallimont has been an innings eater for Clinton throwing a league high 61 innings and not missing a start. Four times this year he has turned in seven inning outings and piled up a league leading 70 strikeouts thus far. During his hottest stretch of the year he earned Midwest League Pitcher of the Week Honors for a 13 inning stretch in which he allowed only one hit and an unearned run. The honor made Vallimont the first Clinton pitcher to take home the award since 2016.

Mejia, 22, nearly matched Vallimont pitch for pitch during his run and owns a 5-0 record and 2.29 ERA at the time of his All-Star selection. After beginning the season with a respectable month of April - going 1-0 with a 3.48 ERA - the Panama native was sensational in the month of May. Mejia threw 34.1 innings in May winning all four of his decisions and posting a 1.57 ERA. He flirted with a no-hitter against the Beloit Snappers on May 20th at Harry Pohlman Field and went the distance to earn the win. Mejia's eight inning complete game performance marked the first time a Clinton pitcher had won a complete game since Robert Dugger in 2017.

The Midwest League All-Star break begins with the conclusion of the first half on Sunday, June 23rd. The three LumberKings will be part of the Western Division All-Stars who fell in last year's meeting in walk-off fashion in Lansing.