Chicharrones de Columbia to Return in 2020 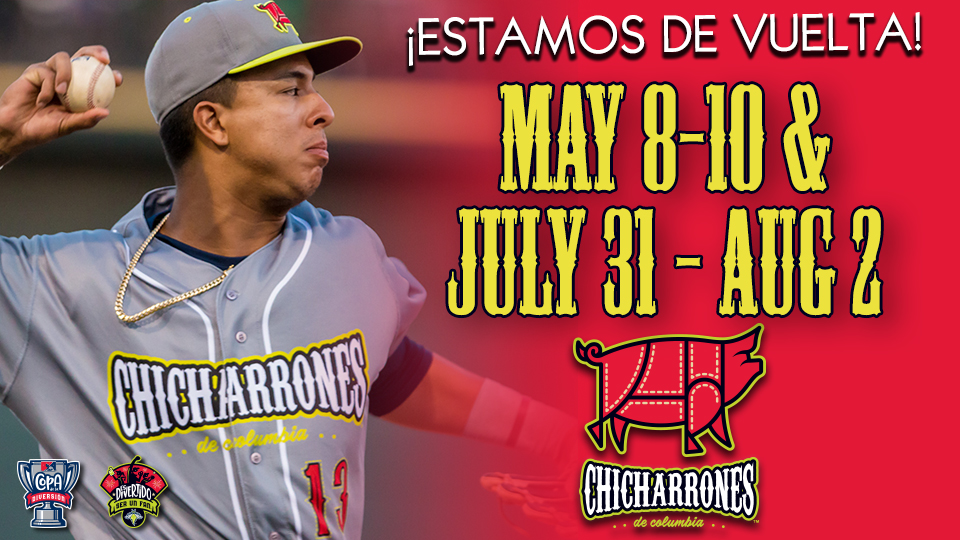 COLUMBIA, S.C. - The Columbia Fireflies today announced the return of their Copa de la Diversión alternate identity, Los Chicharrones de Columbia for 2020. The team will rebrand and become Chicharrones for two weekend series in 2020 in recognition and celebration of Columbia's continuously growing Latinx community. This is the third year of Minor League Baseball's Copa de la Diversión initiative and will be the second year Columbia has participated in the program.

The first time the Chicharrones will take the field in 2020 will be from May 8 through May 10, where they will face off against Los Perros Santos de Charleston (Charleston RiverDogs). The second Copa series will take place from July 31 through August 2 as the Chicharrones take on Las Leyendas (Lexington Legends).

"We're excited to see the Columbia Fireflies continue its commitment to engaging with the Hispanic/Latino community," said SC Commission for Minority Affairs Executive Director Dr. Delores Dacosta. "This is a great opportunity for everyone to embrace the Hispanic/Latino culture and recognize their significant contributions to South Carolina. We look forward to future events and joining in the celebration of our diverse communities."

Columbia's growing Hispanic / Latin American community comprises nearly 6% of the populations of the Midlands region of South Carolina. Consisting of people from over 18 countries across North, Central and South America, Columbia is a true melting pot of Latino culture. While more than 50% of the Spanish-speaking residents in our community are from Mexico, there are large population bases from Puerto Rico, Guatemala, Colombia, Honduras, Cuba and the Dominican Republic. Chicharrones are a pork dish featuring either pork belly or pork rinds and are a staple in the diets of people throughout these countries, albeit with national variations from country to country.

The atmosphere at Segra Park during Chicharrones games will feature music, dancing, specialty food items and more to match the vibrancy of the Latino culture. Chicharrones will remain a menu item at Segra Park throughout the duration of the season. Chicharrones merchandise is available for purchase and can be purchased at the Mason Jar Team Store or online here.

More information about the on-field look, what will be going on each weekend, new Copa merchandise and other Chicharrones news will be announced in March.

Season memberships and group tickets for the 2020 season are on sale now. To purchase, visit the Fireflies Box Office at Segra Park, visit FirefliesTickets.com or call 803-726-4487. Membership plans start as low as $70.

Individual Tickets for the 2020 season will go on sale in February, with select dates going on sale during the holiday season.