Winners of Name the Team contest introduced at Wednesday's event 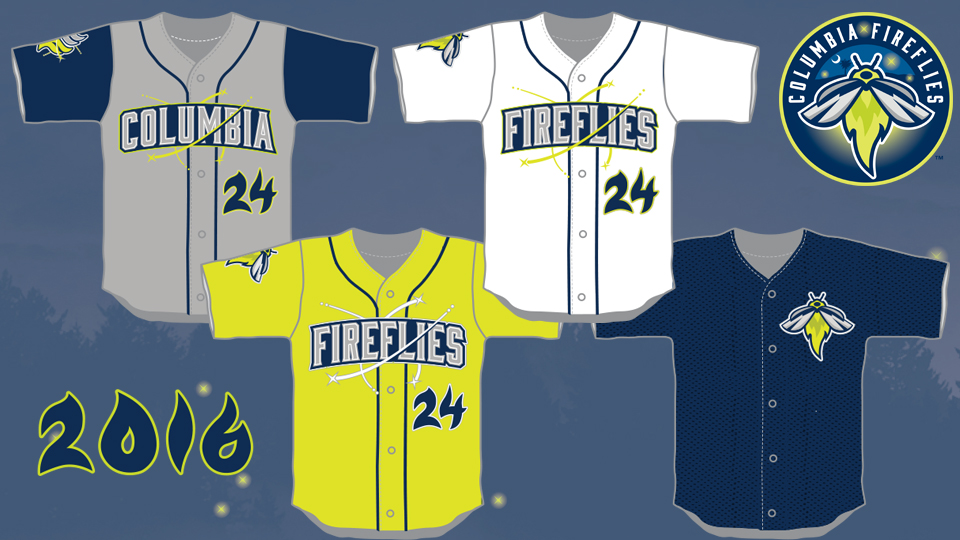 COLUMBIA, S.C. - The Columbia Fireflies today unveiled their uniform jerseys and introduced the winners of the "Name the Team Contest" at a press conference at the South Carolina State Museum. The Fireflies, in conjunction with the New York Mets, also announced their coaching staff for the 2016 season. The team will take the field at Spirit Communications Park in their home whites on Thursday, April 14, 2016.

"We are excited to show our fans what their team will look like on the field," said principal owner Jason Freier. "Our players will be proud to take the field in these uniforms and we are sure that fans throughout the Midlands will embrace the team's look, as they already have our name and logo. We thank the great young players who came out to help us today. We hope to see them on the field at Spirit Communications Park one day."

In conjunction with the uniform unveiling, Executive Vice President Brad Shank introduced the winners of the "Name the Team Contest" that resulted in the Fireflies moniker. Of the more than 2,300 submissions the team received, six members of the Columbia community submitted the name "Fireflies." Those winners are: John Baker, Will Bryan, Ernest Dowdy, Jeremy Gilbert, Rob Grookett, and Lisa Wilcox. Each have been invited to throw out a "first pitch" on Opening Day at Spirit Communications Park, receive a 12-game mini season ticket package, a home jersey and hat, and a framed certificate from Mayor Steve Benjamin and team ownership signifying their naming of the team.

The Fireflies also announced the team's 2016 coaching staff. Managing the Fireflies in 2016 will be Jose Leger. Leger is in his seventh season with the New York Mets. He was the South Atlantic League Manager of the year in 2015, managing the Savannah Sand Gnats to first place finishes in both halves of the season. Prior to Savannah, Leger spent three seasons managing the Kingsport Mets in the Appalachian League and two seasons managing the Mets' summer league team in the Dominican Republic. Leger played professionally in the Minnesota Twins minor league system and played college baseball at Georgia College and State University in Milledgeville, GA. He resides in Santo Domingo, Dominican Republic with his wife Estela and their two sons.

"Leger is the perfect choice to manage the Fireflies in our Inaugural Season," said John Katz, Fireflies team president. "Jose has amazing passion and fire for the game, and his players work hard on the field and in the community."

Hurst, who lives in Spartanburg, South Carolina, pitched in the Major Leagues for both the New York Mets and the Montreal Expos. He comes to Columbia after spending six seasons with the Kingsport Mets. Hurst was also the pitching coach for the Savannah Sand Gnats from 2007-2008.

Fuentes is in his 10th year with the New York Mets. He served as the hitting coach with the St. Lucie Mets of the Florida State League and the Savannah Sand Gnats. Fuentes played professionally in the San Francisco Giants' minor league system from 1997-2003.

Tada is in his sixth season with the New York Mets as an athletic trainer. He spent the last five seasons with the Brooklyn Cyclones of the New-York Penn League and the Kingsport Mets of the Appalachian League.

Tavarez is in his third year with the Mets, after spending the last two seasons with the Gulf Coast Mets.

"This is a great staff for Columbia," added Katz. "Jonathan Hurst and Joel Fuentes have both spent time with us in the Sally League, and we expect fantastic pitching, explosive hitting and a sturdy defense."