The Daytona Cubs Opening Day Roster will feature first round pick Albert Almora, five top-5 round picks and 10 players from 2013. 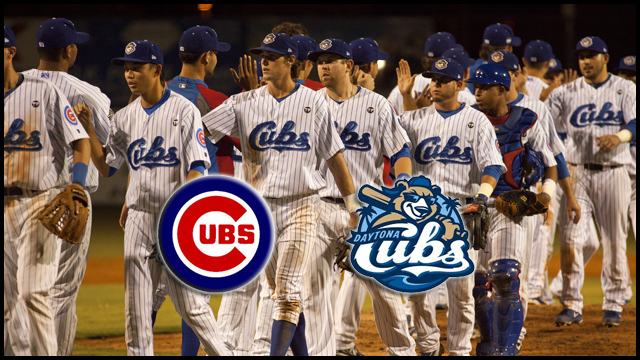 Zastryzny, 22, was selected in the second round of the 2013 draft by the Cubs out of the University of Missouri. In 11 appearances between Boise-A- and Kane County, the Corpus Christi, TX / Edmonton, Can native went 1-0 with a 2.25 ERA, including a 0.93 ERA for the Cougars in three appearances (ER over 9.2 innings).

Vogelbach, 21, who played in 17 games for Daytona after his promotion from Kane County last season, was selected in the second round of the 2011 draft by the Cubs out of Bishop Verot High School in Fort Myers, FL. Overall in 2013, Vogelbach hit .284 with 19 home runs and 76 RBIs and was named a Midwest League Mid-Season All-Star.

The Cubs return OF Pin-Chieh Chen who played 51 games for Daytona last season, and went 4-for-6 with four runs scored in the first inning throughout the 2013 FSL Postseason. Chen will be joined in the outfield by fellow 2013 Daytona Cub Bijan Rademacher who hit .310 in 113 at-bats against righties for Daytona last year. Rademacher also hit .365 in 16 games at Jackie Robinson Ballpark in 2013.

Other returning Daytona Cubs include Kirk, who pitched for Daytona in both 2012 (FSL Mid-Season All-Star Game starting pitcher) and 2013, RHP Zach Cates who will also be in Daytona for a third-straight season, RHP Starling Peralta, RHP Austin Reed, RHP Yao-Lin Wang, C Chadd Krist, and INF Tim Saunders who was sidelined mid-season to have Tommy John surgery.

2014 Cubs infielder/outfielder Rock Shoulders became only the 25th Kane County Cougar in franchise history to be named both a Mid-Season and Post-Season All-Star in the same season last year. The 22-year-old Tampa, FL native hit .258 with 17 home runs and 74 RBIs over 117 games. Shoulders joined Miguel Cabrera, Adrian Gonzalez, Dontrelle Willis and Kevin Millar among others who have accomplished the feat for the Cougars. Shoulders was selected by the Cubs in the 25th round of the 2011 draft out of the State College of Florida, Manatee-Sarasota.

LHP Andrew McKirahan, 23, had a standout 2013 season, pitching for Mesa-R, Boise and Kane County. Over 21 combined appearances, the Georgetown, TX native went 3-0 with a 2.79 ERA, and struck out 37 batters in 29 innings.

RHP Tayler Scott is attempting to become the first player ever to hail from South Africa (Roodeport) and make the Major Leagues.

Four players on the roster have experience beyond Advanced-A ball. Chen, Kirk and catcher Lance Rymel each spent time in AA with the Tennessee Smokies, and RHP Arodys Vizcaino made his Major League debut with the Atlanta Braves in 2011. He is rehabbing from Tommy John surgery.

Villone joins Daytona after spending a season each in Peoria-A and Kane County. The pitching coach replaces Storm Davis who will be in Tennessee with former Daytona Manager Buddy Bailey and former Daytona Hitting Coach Desi Wilson.

Daytona will play its annual exhibition game against Embry-Riddle Aeronautical University at Radiology Associates Field at Jackie Robinson Ballpark on Wednesday, April 2nd, with first pitch scheduled for 6:05 p.m. The seven-inning game will be a "Thirsty-Wednesday" featuring $1 small sodas and draft beers. The Cubs will open the Regular Season on Thursday, April 3rd at Space Coast Stadium against the Brevard County Manatees, and the 2014 Home Opener is scheduled for Friday, April 4th against the Manatees at 7:05 p.m. presented by the Daytona Auto Mall. Gates open at 5:30 p.m. and the night will feature a pregame concert and a postgame fireworks extravaganza.