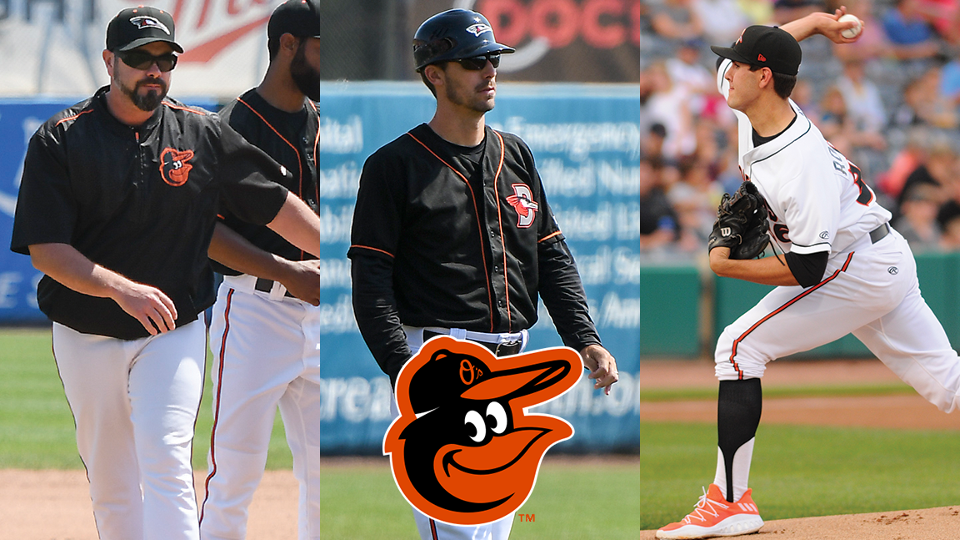 BALTIMORE, MD - The Delmarva Shorebirds, in conjunction with the Baltimore Orioles, are pleased to announce that three of its members have recognized as part of the organization's postseason honors.

Rodriguez, a 19-year-old prospect from Nacogdoches, Texas, mystified South Atlantic League batters all season long. In 20 regular season starts the right-hander went 10-4 with a 2.68 ERA over 94 innings. Rodriguez walked just 36 and struck out 129, good for a 12.35 K/9 mark. He began the season on a 14.2-inning scoreless streak and struck out 10 batters in a game four times, combining for 21 scoreless innings over those four starts.

The laurels from Baltimore are just the latest addition to Rodriguez's 2019 trophy case. Last month he was named the SAL's top right-handed pitcher and Most Outstanding MLB Prospect. He was voted the Northern Division's starting pitcher in the SAL All-Star Game in June, leading a cast of eight Shorebirds in the game. In July Rodriguez made an appearance in the SiriusXM All-Star Futures Game in Cleveland, the first to do so as a Shorebird since Hunter Harvey in 2014.

Rodriguez, who finished the season as the Orioles' No. 2 prospect and No. 45 in all of MiLB, shares the Jim Palmer Award with Frederick/Bowie right-hander Michael Baumann, who was Delmarva's Opening Day starter in 2018. Alex Wells was the last Shorebird to take home the honor, doing so in 2017.

Ramsey oversaw one of the most feared pitching corps in all of MiLB in his first season in pro baseball. The Shorebirds' 3.00 ERA tied for third-best among full-season minor league teams and topped the Sally League by nearly a quarter-run. Delmarva led the minors in saves (53) and batting average against (.205) while tying for the lead in shutouts (20). Shorebird pitching also ranked top-five in total strikeouts (1,389) and WHIP (1.18).

Moore, who has spent six of his 10 seasons in the Orioles system with Delmarva as either a player or a coach, took the reins as manager at Perdue Stadium for the first time in 2019. Under Moore's watch, Delmarva started the season 24-4 and went 48-21 in the first half, running away with the Northern Division title and clinching the team's first postseason berth since 2005. The Shorebirds broke a 23-year-old franchise record with their 84th win of the season on August 20 and became the first SAL team to reach 90 wins since 2006 (Augusta). The club finished the regular season 90-48, becoming the minor leagues' only 90-win team of the year.

Moore's club accomplished a dream season thanks to its ability to win a remarkable number of close games. Sixty-one of Delmarva's 90 wins (67.8 percent) came by three runs or fewer, and 20 of the team's wins were decided in its final at-bat. The Shorebirds set the tone from the get-go, winning 10 games in a row from April 9-18, the first of four separate winning streaks of five games or longer they recorded through the year.

The Shorebirds under Moore were a juggernaut from the get-go. Out of 132 days in which Delmarva played a game, the Shorebirds spent 125 of them in first place by the end of the night. Delmarva never faced a Northern Division deficit of more than one game all year.

In addition to the three Shorebirds honorees, the Orioles will recognize longtime scout Thom Dreier as Jim Russo Scout of the Year. Scout of the Year. Dreier, who has covered South Texas for Baltimore since late 2010, scouted Grayson Rodriguez from Central Heights High School in Nacogdoches. The O's drafted Rodriguez 11th overall in the 2018 MLB Draft. Dreier, who suffered cardiac arrest earlier this year near his home in The Woodlands, Texas, but has since made a full recovery, also won Orioles Scout of the Year in 2016.

The Orioles will honor Rodriguez, Moore, Ramsey, and Theier before Saturday night's game against the Seattle Mariners at Camden Yards. Per the team's press release, the organizational honorees will interact with fans during a Q&A session on the Centerfield Roof Top Deck starting at 5:30 p.m. Player award winners will also be available to the media from 5:15-5:30, and player development/managerial award winners will be available from 5:45-6:00, both on the Centerfield Roof Top Deck.

The Shorebirds are celebrating their 24th season in 2019 and have entertained over five million fans since beginning play at Arthur W. Perdue Stadium in Salisbury, Maryland in 1996. The team captured South Atlantic League titles in 1997 and 2000 and successfully hosted the South Atlantic League All-Star Game in 1999 and 2011.