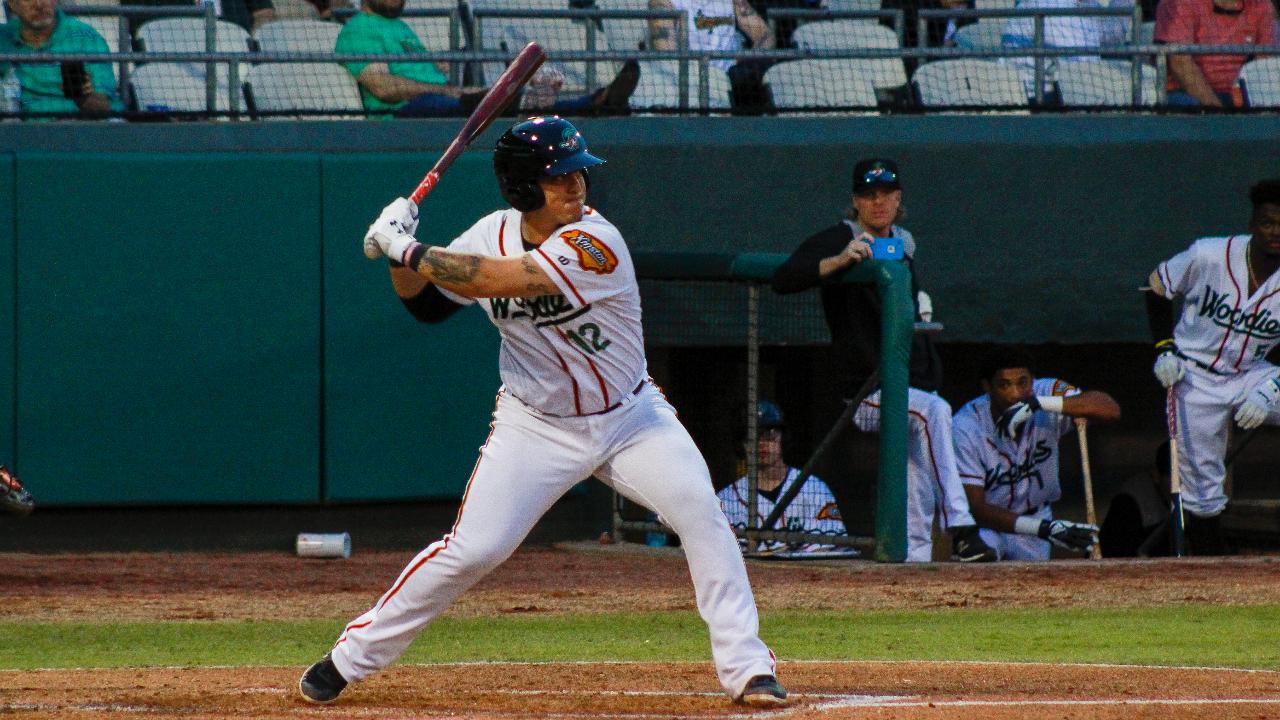 Fayetteville, N.C. - The Down East Wood Ducks picked up a walk-off, 5-4, victory in extra innings in game one of their double-header, before falling 7-2 in the second game against the Woodpeckers in the Carolina League Southern Division Series.

With the bases loaded in the eighth inning and one out, Yohel Pozo lined a single into the left field corner, off of Riley Cabral (loss, 0-1), scoring Sam Huff , and lifting the Wood Ducks to a 5-4 victory.

Down East fell behind one batter in when Jeremy Pena hit a leadoff homer off of Noah Bremer , to make it 1-0.

The Woodies responded quickly. In the home first, Julio Pablo Martinez led off with broken bat single, and Huff followed with a double off the wall in left to tie the score. Two batter later, Sherten Apostel launched a two-run homer to center field, putting the Woodies in front, 3-1.

It remained that way until the fifth. Scott Schreiber led off the inning for Fayetteville with a single to right, and Miguelangel Sierra followed with a home run to left-center to tie the game at 3-3. Later in the inning, Cal Stevenson ripped a homer over the wall in right to put Fayetteville back in font.

Bremer worked 4.1 innings, giving up four runs on eight hits, he matched a career-high with eight strikeouts, and did not walk a batter.

Michael Matuella (win, 1-0) entered for Cole Uvila with the bases loaded in the sixth inning, and was able to pick up a strikeout to keep the deficit at one. Matuella went on to strike out five in 2.1 innings of work.

In the seventh, Yanio Perez hammered a first pitch breaking ball over the wall in left to even the score at 4-4 in the final frame, and force extra innings.

Huff was the inherited runner at second base in the eighth, and Apostel was intentionally walked, before Diosbel Arias was hit by a pitch to load the bases in front of Pozo, who also had two walk-off hits during the regular season.

A scoreless game through three innings, it looked like it game two was shaping up to be a pitcher's duel between Luis Garcia (win, 1-0) and Reid Anderson (loss, 0-1).

However, things took a turn south for the Woodies in the fourth. Chandler Taylor walked to lead off the inning, and David Hensley followed with a double down the right field line. Ruben Castro then game through with a single to center to score Taylor, and while it looked initially like Hensley was out at home on the play, he was awarded the run as a result of interference when he rounded third.

That ended the day for Anderson who gave up two runs on four walks and three hits in three innings of work.

The bullpen struggled after his exit. Jefferson Medina and Francisco Villegas combined to allow a four-run fifth inning, highlighted by a two-run single from Michael Papierski.

Fayetteville would add on one more time in the seventh, when Jairo Beras hit Marty Costes , after loading the bases.

The only offense Garcia allowed came in the sixth, when Julio Pablo Martinez and Sherten Apostel each crushed a solo home run, accounting for all of the offense for the Woodies.

The double-header split sets up a winner-take-all game five, Sunday at 3 p.m. Right-hander Alex Eubanks (9-5, 3.44) will make the start for the Wood Ducks, and face off with Fayetteville right-hander Shawn Dubin (6-5, 3.92). The broadcast will begin at 2:50 p.m. on 960AM The Bull, and online at 960thebull.com as well as on the MiLB First Pitch and TuneIn Radio Apps. For tickets and more information visit woodducksbaseball.com or call (252) 686-5172.