Down East Falls in Game One on Hensley Walk-Off Single 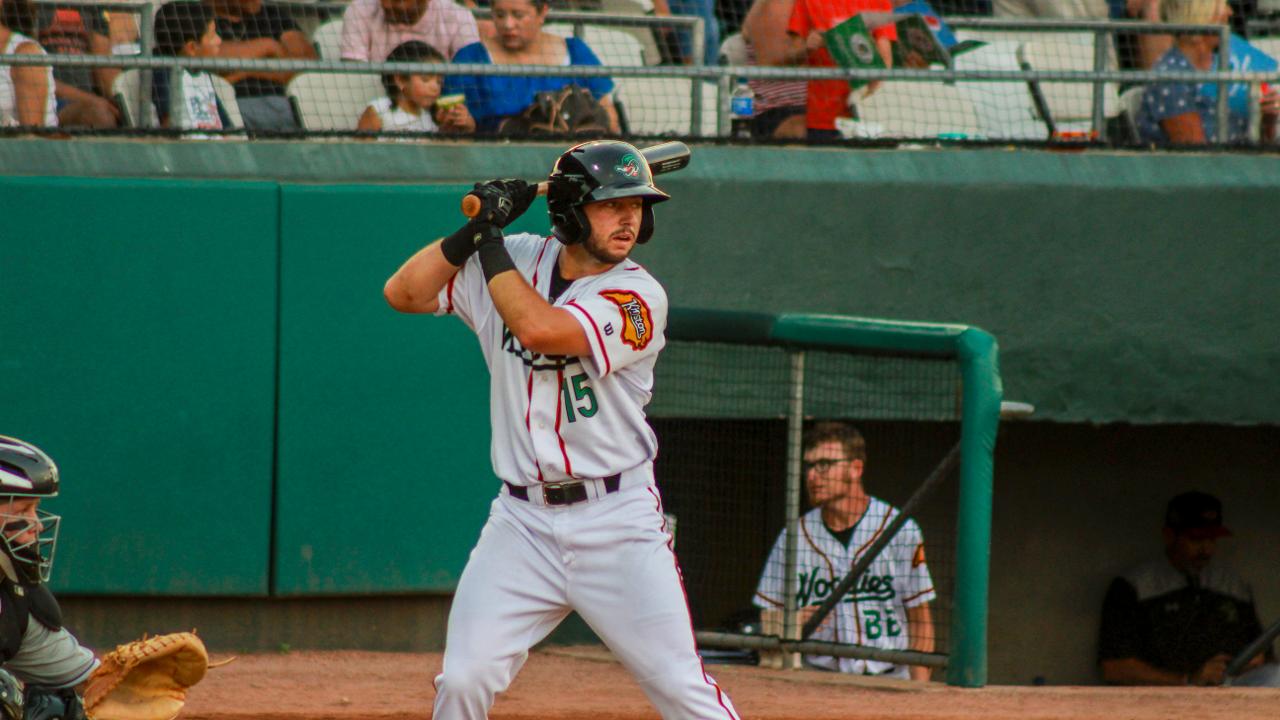 Fayetteville, N.C. - Despite falling 6-5 in walk-off fashion in game one of their double-header, the Wood Ducks came back strong in game two, and earned their 18th shutout win of the season, with a 3-0 victory over the Woodpeckers.

The Woodpeckers used three walks to get out to a 1-0 lead in the first inning against Noah Bremer . Chandler Taylor hit a ground ball to second base and pick up the RBI, scoring Jeremy Pena .

Bremer settled down, facing just one over the minimum the next four innings, and retiring eight straight, entering the sixth.

Meanwhile the Wood Ducks took the lead in the fifth inning. Diosbel Arias , who had a three-hit ballgame, reached on a one-out single, and then Yanio Perez drew a two-out walk. Tyler Depreta-Johnson then followed with an RBI single to center, and the ball bounced under the glove of Cal Stevenson , allowing a second run to come into score and give the Woodies a 2-1 lead.

Bremer then issued a leadoff walk in the sixth inning, and was pulled in favor of Joe Kuzia (loss, 4-2). The Wood Ducks reliever allowed an RBI single to David Hensley to tie the ballgame at 2-2, but was able to strand the go-ahead run on base.

Bremer allowed just two runs on one hit over five innings, walked a career-high four, and struck out six.

In the seventh, the Wood Ducks jumped back in front. Arias led off the inning with a single to left, and with two outs, Depreta-Johnson worked a walk. Julio Pablo Martinez then followed with a moonshot three-run home run off of Parker Mushinski , to put the Woodies ahead, 5-2. It was Martinez' 14th homer of the season, and third in as many games.

Kuzia returned for the save in the home seventh. Miguelangel Sierra and Ruben Castro led off with back-to-back singles, and then Pena reaches on an error, which looked to be a double-play ball, but instead loaded the bases. Stevenson then followed with a walk to push across a run, and then Marty Costes added a run with an RBI groundout. Then after an intentional walk, Hensley came through again, this time with a two-run single, to win it 6-5.

The Wood Ducks pitching was sensational in the nightcap as Francisco Villegas started, and gave up just one hit over four scoreless innings, allowing just two walks, while striking out seven. He did not allow a runner past first base. He then handed the ball off to Josh Advocate (win 5-2) who worked the final three innings. Advocate struck out four, giving up just one baserunner, a hit to Jeremy Pena, who accounted for both hits in the ballgame.

The Woodies broke the scoreless tie against JP France (loss, 4-9) in the third. Tyler Depreta-Johnson walked to lead off the inning, and then Eric Jenkins followed with a single through the right side. With two outs in the inning, Sam Huff came through with an RBI single to give the Wood Ducks a 1-0 lead.

France gave up one run on two hits, and two walks, while striking out five in three innings of work.

Down East added on in the seventh. Bubba Thompson reached on a leadoff single, and then with a hit-and-run on, Josh Altmann singled behind him. On the play, Altmann got in a rundown in-between first and second base allowing Thompson to come into score and make it a 2-0 lead. Depreata-Johnson then also singled on a hit-and-run to again put runners at the corners. Jenkins then laid down a safety squeeze to score Altmann and make it a 3-0 advantage.

The series continues Sunday, when Down East sends right-hander Reid Anderson (6-8, 4.04) to the mound to face off with Fayetteville right-hander Luis Garcia (6-4, 3.17). First pitch is set for 6 p.m., and the broadcast will begin at 5:50 p.m. on 960AM The Bull, and online at 960thebull.com as well as on the MiLB First Pitch and TuneIn Radio Apps. The Wood Ducks will return to Grainger Stadium for Game Three of the Divisional Round of the playoffs Friday, September 6. For tickets and more information visit woodducksbaseball.com or call (252) 686-5172.