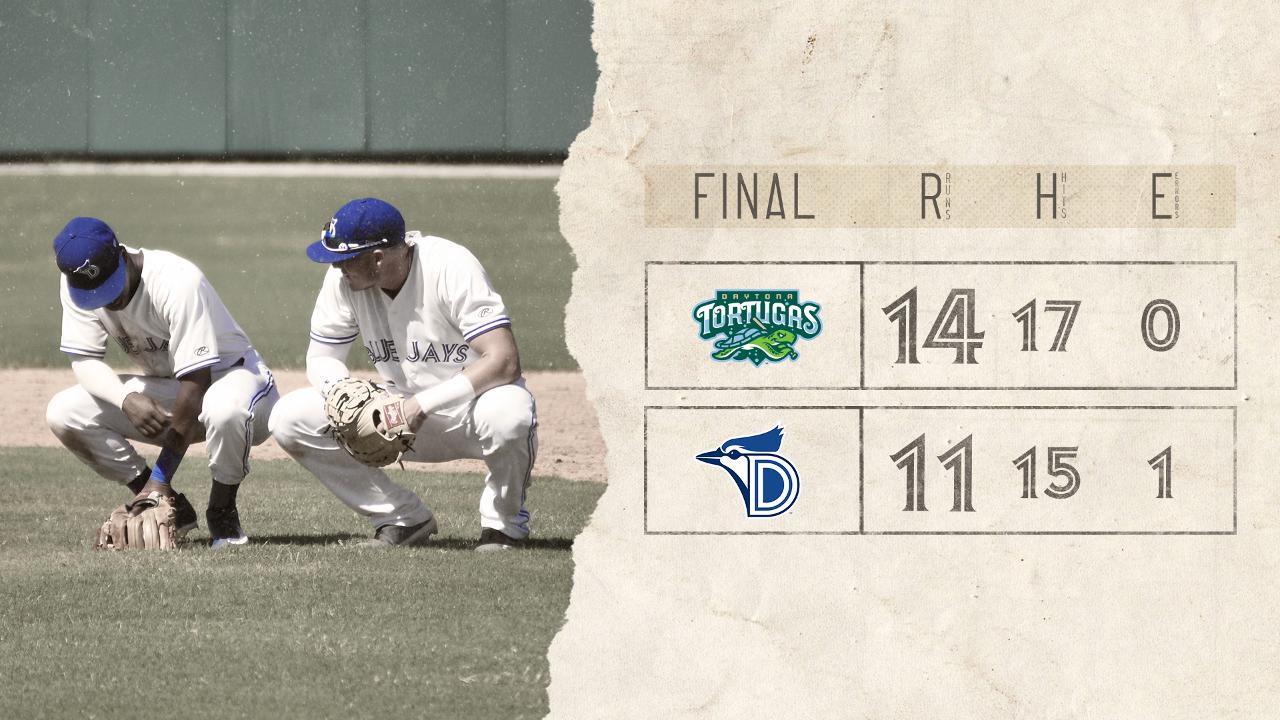 Clearwater- The series finale seemed to begin like the first two games of the series against the Tortugas. Dunedin got out to an early three run lead in the first three frames, and Josh Winckowski was sharp to start as well.

Jesus Navarro opened the scoring with a sacrifice fly in the second and a couple of doubles by Kacy Clemens and Christopher Bec in the third brought the lead to 3-0. The smooth sailing continued for Dunedin into the fourth as Winckowski kept the shutout going and the offense kept scoring. A triple from Norberto Obeso plated two run and a sacrifice fly by Ryan Noda made it 6-0. Kacy Clemens extended the lead even further with a solo home run, his 10th of the year and second of the series.

The fifth inning is where the game began to take a turn in favor of Daytona. Their offense batted around thanks to three walks and four singles. Bruce Yari, Bryant Flete, and Drew Mount all added RBI to storm almost all the way back and make the game 7-6. Maverik Buffo came on in the inning to get out of the jam, but three earned runs and three unearned runs were charged to Winckowski before all was said and done.

Dunedin was unfazed at first by the comeback as they pulled away again in the bottom of the fifth. They sent nine batters to the plate with three straight singles from Ryan Noda, Demi Orimoloye, and Kacy Clemens driving in more runs to go back ahead 10-6. Altogether, there was eight hits, nine runs, and 19 batters sent to the plate in the 5th inning. The fireworks didn't stop there though. The Tortugas drove in two quick runs with a hit by pitch, walk, single, and a double by Jose Garcia. The lead for Dunedin went to just 10-8, and Kyle Weatherly came on out of the pen to limit the damage. A double by Hendrik Clementina to right field brought home two more and the half inning would end with the game tied. As the game would have it, the Blue Jays didn't lose their lead for long. Another RBI for Norberto Obeso with a single over the second base made it 11-10, driving in Hugo Cardona.

The scoring finally concluded in the seventh. A Drew Mount triple was followed by a Mark Kolozsvary single to the left field gap tied the game at 11-11. The Tortugas kept their foot on the gas with a bases loaded walk to score Kolozsvary to take the lead for the first time in the game 12-11. Connor Law came on with the bases loaded and gave up a single to Hendrik Clementina right back up the middle to make it 14-11. The final two frames went quickly compared to the first seven frames, and the marathon eventually end with a Tortugas victory to stay alive in the playoff race. 32 hits, 25 runs, and 408 pitches took place in the game, making for a wild afternoon at Jack Russell Stadium.

Dunedin will go on the road for their last away series of the year at the Florida Fire Frogs with first pitch set for 6:00 pm. Simeon Woods Richardson will be on the mound for the opener of the weekend series.