Maximo Castillo and Graham Spraker combine for 9.1 innings with no earned runs 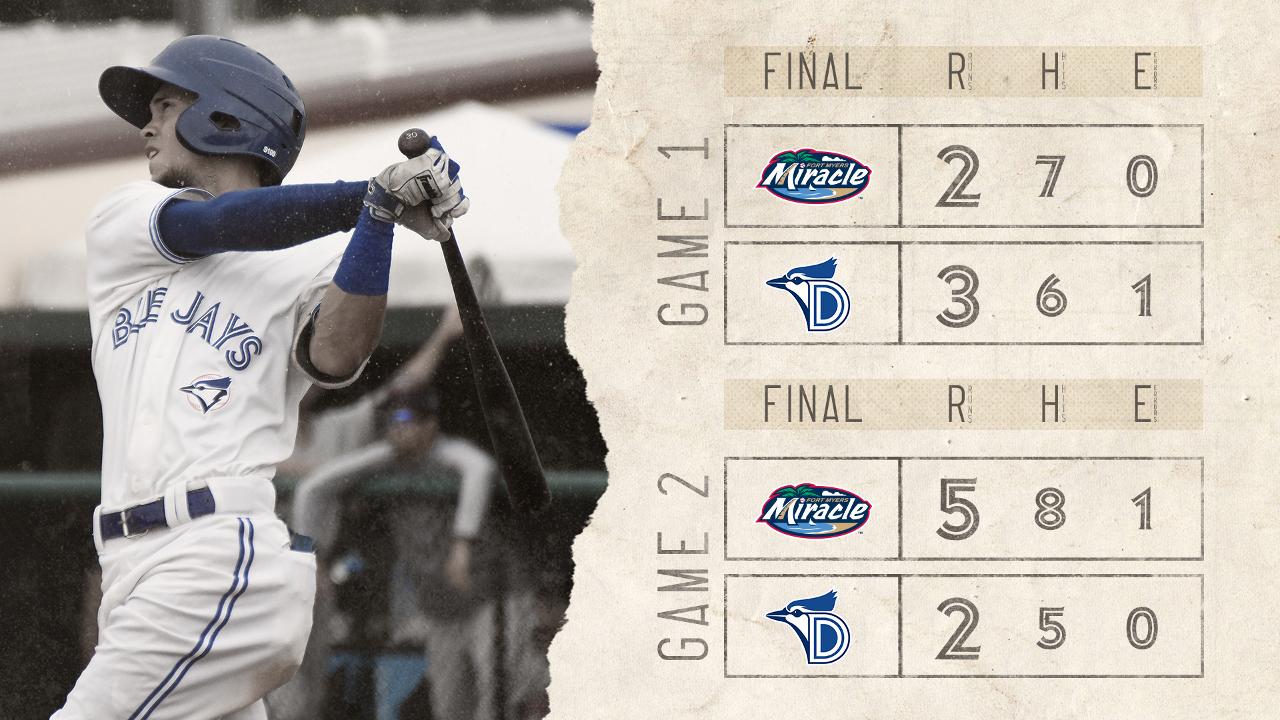 Clearwater- Dunedin and Fort Myers were able to play their first games against each other at Jack Russell Stadium this season with Fort Myers becoming the last team to have to play at the stadium.

The first game of the doubleheader was delayed after a small shower came through, but the game was able to get underway at 2:30. Maximo Castillo was perfect through two innings, and the offense helped to get him an early lead. A double by Kacy Clemens got the hitting going for Dunedin, and Kevin Vicuna followed that up with a double of his own to give the Blue Jays the 1-0 advantage. Castillo stayed sharp through the rest of his outing striking out five while allowing four hits. He did give up an unearned run in the 5th after Demi Orimoloye misplayed a ground ball out in right field.

Samad Taylor began the bottom of the 5th with a single to second and Nick Podkul bunted him into scoring position. Reggie Pruitt drove in Taylor with a double in the left field gap to regain the lead for Dunedin. Castillo recorded one out in the 6th and then Jackson Rees took over. He surrendered a single to Jose Miranda then forced Brian Schales to ground in to a double play to end the inning. Ryan Noda gave the Blue Jays some insurance with his team-leading 13th home run of the year with a deep shot to right-center. Jackson Rees did allow a run in the top of the 7th from a Yeltsin Encarnacion single, but he was able to pick up his seventh save of the year in the 3-2 victory to open the series.

Graham Spraker took the mound for the second game of the doubleheader and struggled a little early. He allowed to singles and walked the bases loaded with two outs in the inning, but a pop out to Nick Podkul in foul ground got him out of the jam. Spraker settled in, and the Blue Jays gave him an early advantage as well with a single by Chris Bec to score Demi Orimoloye. The middle innings got quiet for both sides as Dunedin managed one hit in the 3rd and 4th inning, while the Miracle one got one hit. Spraker finished the day walking three and allowing three hits but having no runs score.

The game changed in the top of the 5th with the Fort Myers offense getting hot. A single by Jacob Pearson and walk for Jose Miranda set the table for Trey Cabbage. The first baseman knocked a three-run homer off the scoreboard to give the Miracle their first lead of the day. Dunedin couldn't get the offense going off of Dakota Chalmers once the 2nd inning passed, and Fort Myers kept extending their lead. In the 6th, Aaron Whitfield scored from a sacrifice fly to center to make it 4-1. One more run was added in the 7th, this time by an Ernie De La Trinidad single to bring in Jose Miranda.

Dunedin tried to make one last push in the bottom of the inning beginning with a double by Kevin Vicuna, who eventually was driven in from a fielding error by Trey Cabbage. The rally stopped there as Norberto Obeso ended the game with a strikeout and the doubleheader split.

Dunedin places two again tomorrow beginning at 5 against the Miracle with Josh Winckowski set to open the first game of the doubleheader.