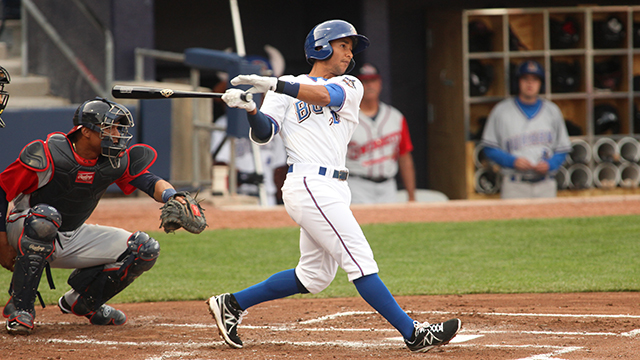 For the second straight game the Bulls (43-32) scored the contest's first run, as Brandon Guyer tripled to lead off the game before scoring on a Cole Figueroa sacrifice fly. However, the Bats countered quickly with a run of their own in the bottom of the frame.

Then in the second Louisville (38-36) took its first lead, plating a pair of runs on a double by Kristopher Negron. The lead was short-lived however, as Durham came right back with four runs in the top of the third, as Guyer, Figueroa, Justin Christian and Wilson Betemit all delivered RBI hits for a 5-3 advantage.

The seesaw battle continued in the bottom of the third though, as Louisville went ahead for good by striking for a five-run frame, tallying six hits and a walk as the lineup batted around to take an 8-5 lead.

The Bulls got a run back in the fifth frame when Betemit came around to score on an RBI single from Curt Casali. The Bats put the game out of reach in the sixth inning though, posting four runs on the board while sending eight men to the plate to put the home side in front 12-6.

In the eighth the Bulls were able to plate a pair of runs on a double by Ray Olmedo and a groundout by Figueroa, but that was the closest they would get as they closed the season-long 10-game road trip with a 5-5 record, and dropped the season-series to Louisville 6-2.

Justin Freeman (1-0) earned the win for the Bats with two scoreless innings of relief, while Jumbo Diaz entered with the tying run in the on-deck circle in the ninth and registered his league-leading 18th save. Righty Nathan Karns (3-4) suffered the loss, allowing eight runs on eight hits in 2 2/3 innings of work.

The rehabbing Guyer had a flawless day at the plate, finishing 4-for-4 with two triples, two runs, an RBI and a walk, while Betemit and Olmedo each had multi-hit days as Durham tallied 14 hits for the second straight day.

The Bulls have their first off day since May 21 Thursday, before opening an eight-game homestand with the first of four games against the Syracuse Chiefs Friday night. RHP Matt Andriese (6-3, 3.06) gets the start for Durham against RHP Josh Roenicke (2-3, 4.60) for Syracuse. First pitch is scheduled for 7:05 p.m.