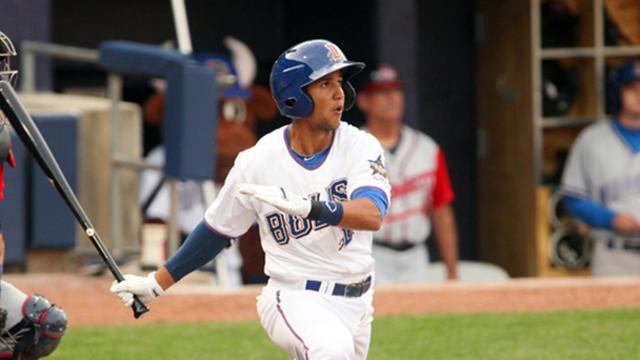 Cole Figueroa reached base safely all five at bats Friday, but it wasn't enough as the G-Braves downed the Bulls

DURHAM, NC - The Durham Bulls dropped the second game of the 2014 season with a 12-7 loss to the Gwinnett Braves at the DBAP Friday night.

The Braves (1-1) extended the lead to 5-0 through three and half before Kevin Kiermaier hit his second home run in as many days to put the Bulls on the board in the fourth.

Edward Salcedo got in on the Braves long ball act in the fifth with a two-run homer off the snorting bull sign in left to put Gwinnett up 8-1.

For the second straight night, the Bulls (1-1) mounted a comeback. Justin Christian's RBI triple highlighted a two-run fifth, and Ali Solis drove in two runs in a three-run sixth. Solis finished 2-for-3, scoring two runs and driving in three on the night.

Durham's bullpen, the key to the Bulls' opening night victory, couldn't hold Gwinnett in check for a second straight game, however. The Braves added a run in the seventh and three in the eighth to extend their lead to five.

Ervin Santana (1-0) earned the win for Gwinnett, despite surrendering six runs (five earned) on eight hits in 5 1/3 frames, while Cody Martin earned his first save of the year with three innings of one-run baseball. Enny Romero (0-1) took the loss for the Bulls, allowing six runs (four earned) on six hits in four innings while striking out a quartet.

The teams square off for the third game of the season-opening four-game set on Saturday at 5:05 p.m. RHP Matt Andriese makes his Bulls debut, against LHP Daniel Rodriguez. Tomorrow is Championship Saturday, as the returning players from the 2013 Governors' Cup team will receive their championship rings in a pregame ceremony, the team will raise the championship flag and the players will don special gold-detailed jerseys commemorating the championship season.

BULLet Points: INF Cole Figueroa finished 2-for-2 with two singles and three walks, as he's now reached base safely in seven straight plate appearances… The 12 runs allowed was the most the Bulls have surrendered since August 9, 2013 against Charlotte when they lost 12-1, a span of 32 games combining the regular season and postseason.