Documentary Project to Cover a "Season at the Ballpark and Beyond" 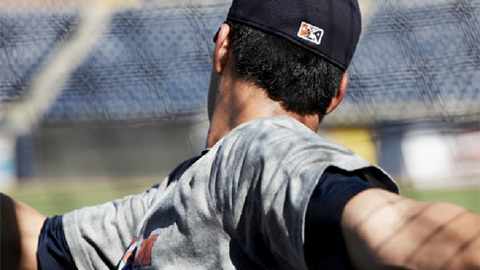 The legendary Durham Bulls will be the subject of Sam Stephenson's newest documentary project, Bull City Summer: A Season at the Ballpark and Beyond. Beginning with the Bulls' home opener on April 8th, nationally known writers and photographers will chronicle the Bulls' 2013 season, including a daily blog of text and pictures, BullCitySummer.org. The project will culminate in an exhibition at the North Carolina Museum of Art and the publication of a book in 2014.

"The goal of the project," said Stephenson, "is to converge on the stadium and its surroundings with a team of documentarians and see what we find - stories, images - on the field and behind the scenes over the course of a season. If we succeed there will be a portrait of the art and craft and grit of baseball and the community that revolves around it in downtown Durham."

To kick off Bull City Summer the internationally acclaimed photographer Alec Soth is in town from his home in Minnesota to document the season's opening home stand this week, April 8-12, using his large format camera. The project appealed to Soth, whose work focuses on contemporary American stories; "The opportunity to photograph spring baseball in North Carolina was a no-brainer. But beyond the obvious pleasure of the assignment, I'm excited to see how the medium of photography engages with the sport. The pacing of baseball arouses a kind of leisurely attentiveness that is analogous to photographic seeing. You look and look and then every once in a while, snap, you get a hit."

Joining Soth is, among others, writer Adam Sobsey, a playwright who has been a Durham Bulls beat writer for the past five years and writes a weekly column for Baseball Prospectus, and whose plays have been produced in New York, North Carolina, and Texas; "For me, a baseball game is much more than a series of events and outcomes simply to be reported and disseminated. It's a cultural object, both by itself and as it interacts with American life, and therefore a subject for documentary art--it invites and demands consideration, elaboration, framing, cropping, coloring and exposure. This project is a natural fit for the way I look at and write about the sport."

Stephenson's last project, The Jazz Loft Project, won a 2010 ASCAP-Deems Taylor award for its wide-ranging outcomes including a book, exhibition, website and public radio series. His book is also the basis for a documentary film currently in production. A longtime Triangle resident, Stephenson said, "The Jazz Loft Project concerned a building in New York City 1957-1965 obsessively documented by photographer W. Eugene Smith. For a decade it felt like I was living in 1959 New York City. By the end I was ready to live in 2013 Raleigh-Durham-Chapel Hill, to document something happening here now, not New York fifty years ago." Bull City Summer is the inaugural project of Stephenson's new Rockfish Stew Institute of Literature and Materials.