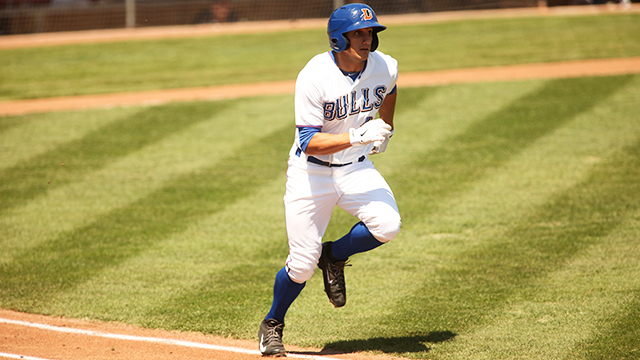 DURHAM, NC - The Durham Bulls cracked three home runs en route to a 6-2 win over the Louisville Bats Sunday evening at the DBAP, tying the four-game set at one game apiece.

Mikie Mahtook hit a two-run home run, his first career Triple-A dinger, in the bottom of the fourth to erase a 2-1 Louisville lead and put the Bulls on top to stay. Mahtook went 3-for-4 and also drove in the Bulls' first run of the game with a second-inning single.

That was all starter Mike Montgomery (5-1) would need as he became the sixth I.L. pitcher this season to reach the five-win plateau. Montgomery scattered six hits and two runs over 6 1/3 innings and struck out four as he improved to 4-0 at home on the season.

The Bulls (26-19) added a pair of insurance runs in the sixth. Wilson Betemit led off the inning with a line drive to right for his ninth homer of the season, tied for third-most in the league. Two batters later, Vince Belnome hit a solo shot onto the berm in right-center for his third of the year, as he finished 3-for-4 with two runs scored for his second straight three-hit night.

Tim Crabbe (2-4) took the loss for the Bats (20-23), surrendering five runs on nine hits over 5 1/3 innings. Jake Thompson and Kirby Yates combined to record the final eight outs and preserve the win for Montgomery and the Bulls.