Bulls Shut Out Indians to Take Game One 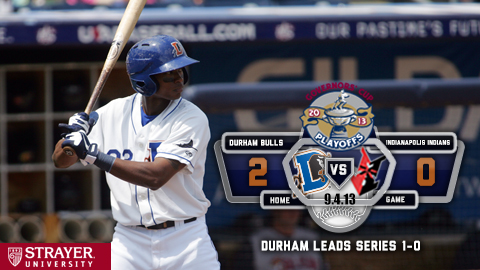 The IL South champion Durham Bulls won a gem of a game in the 2013 Governors' Cup Playoffs opening round, beating IL West champion Indianapolis 2-0 at the DBAP Wednesday night. Durham takes a 1-0 lead in the best-of-five series.

Tim Beckham had three of Durham's five hits to lead the Bulls to the win. Beckham drove in the first run of the game, in the eighth, on a single through the right side that scored Kevin Kiermaier, who had doubled.

Jake Odorizzi started for the Bulls, his third straight postseason series where he's gotten the ball for a Game One start. He was up to the challenge, retiring 13 straight Indians at one point and allowing just one hit in seven innings while striking out nine.

Indianapolis starter Brandon Cumpton matched Odorizzi zero-for-zero. He allowed a single to Beckham to lead off the game, then retired the next 18 Bulls.

Odorizzi and Cumpton combined for a perfect game within the game, retiring 27 straight batters from the second through the sixth inning.

In a dramatic seventh inning, Odorizzi managed to pitch his way out of a bases-loaded one-out jam. An error by Beckham gave Indianapolis their first runner since the second inning. Odorizzi missed on a couple of close pitches and seemed to get frustrated, loading the bases with two walks.

After a visit from pitching coach Neil Allen, the DBAP crowd rose to its feet and cheered as Odorizzi struck out Brett Carroll on a full-count. Odorizzi then induced Lucas May to fly to center to end the threat and produce one of the most dramatic moments at the DBAP this season.

After Beckham broke up the scoreless tie, the Bulls added an insurance run on Vince Belnome's bases-loaded single, also in the eighth.

Jeff Beliveau (W, 1-0) struck out two in 1.0 inning to earn the win. Kirby Yates (1) pitched the ninth and escaped another bases loaded jam for the save.

Game two of the series is set for 7:05pm on Thursday night at the DBAP. The Bulls will send J.D. Martin, the IL's Most Valuable Pitcher, to the mound against Indy's Graham Godfrey.